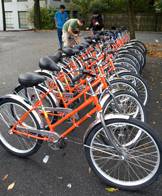 More than 80 new bright orange bicycles were shipped to Princeton in mid-September and distributed to residents of Forbes College. The remaining 20 of the University's order will be ridden from the factory in Queens to Princeton on Sunday, Oct. 25. Photos: Denise Applewhite

As part of a move to expand Princeton University's student bicycle rental program and to extend sustainability efforts, a group of approximately 20 cyclists -- including University students and staff, as well as members of the community -- will ride on Sunday, Oct. 25, from the Worksman Cycles factory in the Ozone Park neighborhood of Queens, N.Y., to Princeton, N.J.

The UBikes program, through which abandoned bicycles from around the University campus are repaired and rented to campus members, has purchased a fleet of nearly 100 new, customized bicycles from New York-based manufacturer Worksman Cycles. While more than 80 of the new bikes were shipped to Princeton in mid-September and subsequently distributed to residents of the University's Forbes College residential complex, the remaining 20 were held at the factory in Queens in anticipation of the mid-October ride.

The idea for the ride was born out of talks between Jeffrey Domanski, associate manager of the University's Office of Sustainability and doctoral candidate in the Woodrow Wilson School of Public and International Affairs, Sean Gleason, UBikes program manager, and Wayne Sosin, president of Worksman Cycles. The three were discussing ways to ship the bikes so as not to produce excessive waste from packaging when Domanski suggested the idea for the interstate ride.

According to Domanski, the goal of the ride is "to demonstrate and build awareness of the sustainably-local choice we made." In addition, the ride is intended to exhibit the feasibility -- and fun -- of long-distance bicycle transportation.

"When thinking about how to get a fleet of bikes from Queens to Princeton, most people would probably think of shipping them in a truck," Gleason said. "But they're bikes; they're made to be ridden, not carried. It only makes sense, then, that we should ride them." 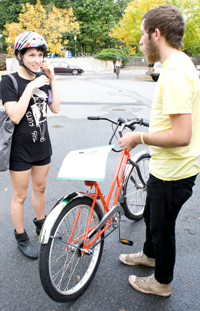 The riding event will begin with a pre-dawn gathering of participants at Princeton Junction. With the intent of keeping the event as eco-conscious as possible, the group of approximately 20 cyclists will use only public transportation to get to the bicycle factory, boarding the first morning train (5:12 a.m.) to New York Penn Station. From Penn Station, they will take the A subway to Ozone Park, Queens, where Worksman Cycles is located. After a quick review of the day's plans and some stretching, the ride will kick off just after sunrise.

The first leg of the ride, estimated at 10 miles, will take the group on their bright orange Princeton University UBikes through much of Brooklyn, across the Brooklyn Bridge and down to Pier 11. The group will then take the 10:25 a.m. SeaStreak ferry, arriving in Highlands, N.J., at 11:45 a.m. After lunch at the shore, the ride will continue another seven miles to Middletown, N.J., followed by a six-mile trek to Holmdel, N.J. After about 11 more miles, the group will make it to Englishtown, N.J. The next 10 miles will set them in Cranbury, N.J., and the final nine miles will bring them back to Princeton just before sundown.

The approximately 55-mile day will conclude with a 6 p.m. welcoming celebration at The Cyclab, the University's new bicycle cooperative, which is located in the New Jersey Transit "Dinky" commuter shuttle parking lot at 130 University Place. There will be a support van that will accompany the riders along the way, carrying a mechanic, a few spare bicycles and parts, as well as food and water for the riders.

Once on campus, the 20 new bicycles will be used in a pilot bike-share program for University staff members. The bikes will be stationed at designated University buildings, where employees may sign them out to make quick trips around campus. The aim of the bike-share program is to increase convenience for staff, while providing alternatives to automotive transportation as part of sustainability efforts. According to Gleason, "vans, cars and even those little golf carts are too often unnecessary for getting around campus."

More than a stimulating bike ride, the Queens-to-Princeton ride is intended to represent a push toward more bicycle-centric programs at the University and in the surrounding areas, organizers said.

While Domanski and Gleason have been the primary organizers for the ride, it has been made possible through the support of the Office of Sustainability, the High Meadows Foundation and the Greater Mercer Transportation Management Association.