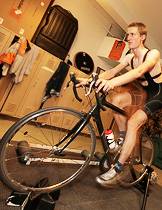 The day before heading to the world championships in Germany this fall, Princeton junior Nick Frey put himself through a grueling test to simulate the upcoming race route. He records distance, speed, cadence and power output during workouts like these in the Dillon Gymnasium bike room to determine his best racing strategy. 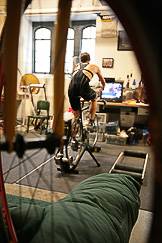 With his bike on stationary mounts and recordings of previous Tours de France on the television in front of him, Frey measures all aspects of performance, creating complex graphs of the data to analyze his rides.     Bottom left: After a hard midday ride, Frey hangs up his bike and checks the power meter one last time.     Photos: Denise Applewhite

Nick Frey sat at rapt attention in his fluid mechanics course last spring, absorbing principles that he would end up applying halfway around the world this fall.

The mechanical and aerospace engineering major was conjuring ways to put his newfound knowledge to work in modifications to his racing bike. The reigning national time-trial champion and co-president of the University cycling team, Frey has aerodynamic aspirations that go far beyond taping the vents on his helmet -- a common practice among racing cyclists to reduce wind resistance.

"Nick was one of the most active students in my class -- always wanting to know more details, or to make sure he understood everything," said Alexander Smits, the chair of mechanical and aerospace engineering and Frey's fluid mechanics professor. "It was great to have him in the class. He bemoaned the fact that Barrie Royce and I were no longer offering our freshman course, 'The Bicycle and the Engineer,' but he seems to have put his fluid dynamics know-how to very good use."

A prime example is the modification Frey made to house the brake cables on his time-trial bike. When he learned that solid cylinders have high air resistance, Frey equated cylinders with bicycle brake cables -- and saw an opportunity to go faster.

He knew that once an object, such as a cyclist, is moving fast enough, the main barrier to going even faster is wind resistance; nearly all the cyclist's strength goes into pushing aside air. Conversely, reducing that resistance by a relatively small amount can result in major increases in speed with minimal increased effort. So Frey enclosed his brake cables in a special housing shaped like an airplane wing that shields them from the wind, reducing the resistance on his bike while still meeting the requirements of the organization that oversees competitive cycling events throughout the world, the Union Cycliste Internationale.

"It's like free speed," said Frey, a junior. "And in cycling, every second counts."

His passion for cycling began when Frey was 14, growing up in Des Moines, Iowa. He got his first mountain bike, he recalls, and immediately became "obsessed" with the gear.

"We call it 'getting geeked out' in the cycling world," he says. "So, I guess I would say I was an engineer before a cyclist. The cool gadgetry of cycling got me interested in the sport."

A mountain-biking buddy introduced him to racing the following year. Frey promptly took sixth place at the junior national championship, and that was it. He was hooked.

After arriving at Princeton, Frey began to apply his engineering skills to his cycling. His extensive research pervades his cycling equipment, from the helmet he purchased to match his riding posture to the silicon gel between his wheel rims and tires that subtly changes the shape of his tires, making them more aerodynamic.

Even his own performance is subject to rigorous analysis. During tests in the bike room in Dillon Gymnasium, with his bike on stationary mounts and recordings of previous Tours de France on the television in front of him, Frey measures all aspects of performance. Distance and speed are just the beginning: He also records cadence and power output and creates complex graphs of the data to analyze his rides. He posts his training and performance results, along with details about various races, on his blog.

All the top professional cyclists obtain similar information about their own performances, but they don't usually do the analyses themselves. Frey prefers it his way, feeling that it gives him an extra edge as he strategizes for upcoming races.

During this summer's national time trial race, his average speed was around 30 miles per hour for just about 30 minutes. He calculated that his average power for a 15-minute period during the race was 377 watts, just over half of a horsepower. This performance landed him a chance to compete in the Sept. 26 world championship time trial in Stuttgart, Germany.

In preparation for the competition, Frey conducted a series of tests to determine his best racing strategy. The day before leaving for Germany, he simulated riding up a major hill on the actual race route.

"I wanted to determine the maximum intensity I can put out when I'm going up the hill without overdoing it," he said, after finishing the test. "If I figure out the power output I should maintain, it'll be kind of like playing a little video game at the race -- staring at my power monitor as I go up the hill. If you don't know how hard to go, it's easy to hit the hill way too fast and your legs'll be toast by the time you get to the top."

At the world competition, Frey had the opportunity to share rides and meals with some of the top cyclists in the world, including fellow Iowan Jason McCartney and Dave Zabriskie. Zabriskie is one of only three Americans ever to wear the leader's yellow jersey in the Tour de France.

"It's so amazing to see that these guys are doing the same thing I'm doing -- they're just bike riders," he said. "It's so inspirational. They show you that if you've got some talent and luck, and if you stick with it, you can get to their level. McCartney trained on the same awful roads that I did in Iowa -- it's so cool to think about what is possible."

Spending time with these professional riders and hearing about their past competitions helped shape the way that Frey reacted to his performance at the world championship, where he took 57th place.

"At first, I was really disappointed, mainly because I felt like I let down all these people who were supporting me -- my parents, the U.S. team, the mechanics," he said. "But then, I realized that they understand that everyone can have really amazing rides and really bad rides, and so then I was really happy that I got to worlds in the first place. And then, right away, I started to think about what I'll do differently next year -- because I plan on getting there again next year."

His plan for his future extends beyond training strategies to professional ambitions that combine his interests in engineering and cycling. His goal is to start a company that designs cycling gear, accessories and gadgets that push the limits of speed or enhance the sport of cycling. He is honing his product design and marketing skills this semester in "Entrepreneurial Engineering," a course taught by Daniel Nosenchuck, an associate professor of mechanical and aerospace engineering.

Frey previously gained valuable experience in product design this summer in an internship at Ball Aerospace and Technologies Corp. in Boulder, Colo. Working with a team of engineers, Frey helped design the electronics packaging for a future satellite.

"I approached it the same way I've been taught to approach problems in engineering classes, by being open to nontraditional solutions," he said. This open-minded attitude allowed him to contribute new ideas to a team of many longtime engineers.

With the world championship behind him, Frey took an unprecedented two weeks off from riding his bike, even just to class. Though his newfound, albeit brief, status as a pedestrian resulted in his being late to class a time or two, he said it was the best way to recover from the tough summer of racing and ready his body for next year's competitions.

During his normal cycling regimen, he'll spend between 20 and 25 hours on his bike each week, often riding with his teammates on the cycling team. At other times, he'll take off by himself, with no firm plans for where he'll ride, not sure of much more than how long he plans to spend on his bike. His circuitous routes often take him through the New Jersey towns of Frenchtown and Ringoes, or across the Delaware River to Doylestown, Pa.

"I don't start out with a laundry list of things to do, because then it feels more like a job and I want to enjoy what I'm doing," he said. "It's not that complicated," he added, before sharing his personal philosophy: "Get on the bike and ride." 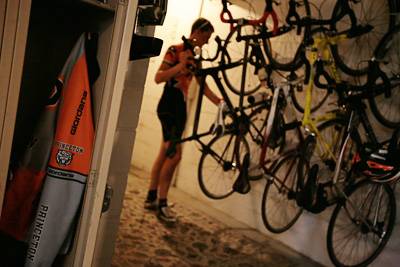