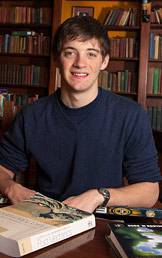 Princeton's class of 2010 valedictorian David Karp, who will present his valedictory address at Commencement, has embraced teamwork and creative problem-solving in his path to the top of the class. Karp wants to pursue pathbreaking research in aerodynamic design. At Princeton, the mechanical and aerospace engineering major especially enjoyed working with faculty and classmates to solve challenging science and engineering problems. 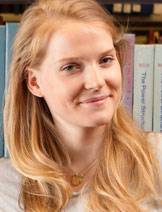 Also speaking at the Commencement ceremony will be Marguerite Colson, a history major, who is the salutatorian of the class of 2010. She will continue the tradition of giving a speech in Latin. Read more about Colson in a related story.    Photos: Brian Wilson

Early last fall Princeton's class of 2010 valedictorian David Karp was taking in a lecture by Professor Alexander Smits on the daunting science of turbulent flows as part of a graduate-level engineering course. Thinking ahead about the intimidating problem sets he would have to solve for the course, the straight-A student looked around the classroom and was relieved by the sight of his friends.

His eyes rested on the only other undergraduates in the class of 22, Margaret Byron and Michael Papageorge. They had discussed the course the previous spring and had decided to form "Team Undergrad," a study group. Together, as Karp hoped, they ultimately would attack the problem sets over the semester with great alacrity, gathering over several weeknights in the library of Charter Club, the eating club where Karp is an officer.

What unfolded, for Karp, was one of his best experiences at Princeton. "Working with these classmates reinforced what I have learned over the years about this place -- that it is filled with incredible people with a multitude of talents," he said. "It also struck me, though, how willing my friends were to work together and help each other. I have learned that there is great power in this."

Karp's path to the top of the class -- which will culminate with his valedictory address at Commencement on Tuesday, June 1 -- has been propelled by his embrace of teamwork and creative problem-solving.

Ultimately Karp, who is majoring in mechanical and aerospace engineering, aced Smits' graduate course and formed a lasting bond with his classmates. Smits noted that Karp outdistanced everyone except for the best graduate student in the course. He regards Karp as perhaps the best student he has seen in his 29 years at Princeton.

"He has an almost playful approach to the task at hand, where he first masters the fundamental understanding," said Smits, the Eugene Higgins Professor of Mechanical and Aerospace Engineering and department chair. "Next he broadens the task and raises the bar, perhaps to make it interesting enough to create a genuine challenge, and then he overcomes this challenge of his own making, often in an elegantly simple way."

Karp has accumulated a 4.0 grade point average and 29 A's and A+'s. In addition to his major, he will earn certificates in applied and computational mathematics and in applications of computing. His experience at Princeton has left him with an appreciation for the collaboration that he has enjoyed in his academic and social life, and a deep gratitude for his family's help in supporting him on his way to Princeton and through his college years, he said.

As a person whose dream is to conduct pathbreaking research in aerodynamic design -- be it spaceships, high-speed aircraft or racecars -- Karp said it's been wonderful to learn firsthand how useful teamwork can be in solving big problems. And, even if, scientifically speaking, one is flying solo, he said, it can be inspiring to be working in a cauldron of discovery such as Princeton.

"You think of someone with a world-class mind like John Nash," said Karp, speaking of the Nobel laureate and senior research mathematician in the Department of Mathematics who is a personal hero of his. "But even Dr. Nash, when he was working here in Princeton in the 1950s, doing the work that would win him a Nobel Prize, was working in a community of astounding individuals, like (Professor of Mathematical Economics Emeritus) Harold Kuhn. That had to be important to him. Great minds build off each other."

Karp's eyes light up when he talks about his passion for aerodynamic design. He gestures with his hands when he describes the air flow over various shapes and how he would like to improve the geometry to make things, as he said, "go really fast." He loved doing his senior thesis on the use of computer simulations to optimize the flow of air around a wing. His adviser, Luigi Martinelli, an associate professor of mechanical and aerospace engineering, described the work as "a very challenging project at the intersection of aerodynamics and computational engineering that is very much a contemporary research issue in our field."

The final objective of aerodynamics, Martinelli explained, is to determine shapes that interact optimally with substances such as air or water. In the 1990s, Martinelli's research group at Princeton developed a novel and powerful aerodynamics design tool for flight conditions in which the air flow is stationary, such as when an airliner is moving at cruise speed. Karp's thesis is devoted to the extension of that method for aerodynamic devices operating in a time-dependent flow, such as a blade for a wind turbine or flapping wings.

Once implemented in software and fully tested, Karp's thesis is expected to provide a useful new tool for the design of more efficient airfoils for rotating blades, Martinelli said.

Karp said he did his best work on the project in the wee hours of the morning, fueled by chicken nuggets. "I can't go to sleep until I finish a problem," he said.

Martinelli, who taught Karp in four courses, said it was fun to witness Karp thinking through a problem. "David has demonstrated superior command across the entire spectrum of academic engineering disciplines, from advanced applied mathematics to practical aspects of engineering design," Martinelli said. "He is gifted with an elegant and clear thought process and consistently demonstrates the ability to learn quickly."

Challenges in and out of class

In considering some elements of his academic success, Karp credits his classmates for working with him in a study group at Butler College for a 300-level course in materials science during his sophomore year. Professor Emily Carter taught the course and remembers Karp as a standout, besting all members of the class, two-thirds of whom where juniors and seniors.

"David is simply the best undergraduate I have encountered in the six years I have been a faculty member at Princeton, and ranks among the very top few of thousands of undergraduate students I have taught over my 22 years in academia," said Carter, the Arthur W. Marks '19 Professor of Mechanical and Aerospace Engineering and Applied and Computational Mathematics. 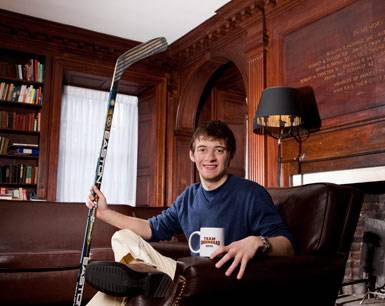 Some of Karp's best experiences at Princeton came in studying with his peers in the library of Charter Club, the eating club where Karp is an officer. As a co-founder of the independent intramural sports team the Black Squirrels, he also has greatly enjoyed team sports, including his favorite, floor hockey.

Karp created an outlet for his penchant for teamwork in his freshman year by co-founding the Black Squirrels, which allowed him to continue to play his favorite high school sport -- floor hockey. The independent, intramural sports team is named for the relatively rare subgroup of the eastern grey squirrel that is ubiquitous in Princeton. The team has grown from its prime hockey focus to field teams also in broomball, soccer, kickball and team handball, and has won several University competitions.

Karp also stretched his capabilities by taking on a new challenge as a journalist, writing sports news about sprint football, softball and men's ice hockey for The Daily Princetonian student newspaper.

Karp concedes that he is competitive, not so much with others but with himself. When he plays golf, for example, he gets annoyed with himself if he is not playing at his personal best. "It's as if I know what I am capable of and I don't like it if I don't meet that mark."

A tendency toward tenacity

The drive to excel was nurtured in Karp early, as a talent for research runs in his family. His maternal grandfather, A. Eric Andersen, was recruited at age 17 to work at Los Alamos National Laboratory in New Mexico during World War II as part of the Manhattan Project to build the atomic bomb. Karp's father, Doug, is an electrical engineer and business executive, and his mother, Karen, is a research nurse at the neonatal ophthalmology division at the Children's Hospital of Philadelphia. He has one sister, Melissa, who is a freshman at Tufts University.

His parents always encouraged his intellectual growth, he said. They posted multiplication tables on the refrigerator when he was five so he could memorize them. And he did. When they were driving in Berwyn in suburban Philadelphia, where he grew up, his parents would point to successive speed limit signs and ask him to add one to another. "They were always coming up with puzzles and problems for me to solve," he said.

His parents allowed him to skip second grade but kept him at grade level after that, though some teachers wanted him to be accelerated. "My parents didn't want me to be too much younger than everyone else," he said. "And I'm glad about that. I had a very happy school experience."

He excelled in his studies at Conestoga High School. When he wasn't studying, he was playing street hockey in his neighborhood or floor hockey somewhere else, Karp said.

At Princeton Karp has won many honors. He twice won the Shapiro Prize for Academic Excellence. He was elected to the Tau Beta Pi engineering honor society in 2008 and to Phi Beta Kappa in 2009. In fall 2009, he was the co-winner of the Class of 1939 Princeton Scholar Award, given to the student who has achieved the highest academic standing at the end of junior year.

Karp also has won significant recognition beyond Princeton. He was one of 14 students nationwide to be awarded a Churchill Scholarship for 2010-11, which he will use at the University of Cambridge to pursue a master of advanced studies in applied mathematics. And he is one of 15 students nationwide to receive a $250,000 fellowship from the Fannie and John Hertz Foundation, which will support five years of doctoral study in computational fluid dynamics at Stanford University.

This summer, Karp will be working at Jane Street Capital in New York, a proprietary trading firm.

Looking ahead, Karp is considering multiple career paths. He might design spacecraft for NASA or work on hypersonic aircraft. He might pursue a career in finance. He also loves race cars, a passion he picked up from his mother, so he might end up creating new models for Formula One vehicles. And he wants to spend some time snowboarding, a sport he picked up recently.

"These are exciting choices, all growing out of my experience here," Karp said. "I'm looking forward to figuring it out."