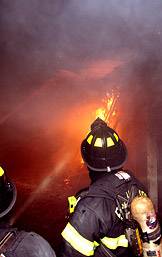 Twenty-four University employees are participating in a pilot program in which staff members volunteer with the Princeton Fire Department during their work shifts. While 16 are already trained as volunteer firefighters, eight recently completed training at the Mercer County Fire School. Their instruction included participating in a live fire training program. (Photo: Christopher Lillja)

On the morning of Oct. 7, the Princeton Fire Department sent out a call -- firefighters were needed to respond to an alarm at 1 Monument Drive.

Four University employees -- Bob Allen, Michael Christensen, Michael Kervan and Chris Machusak -- rushed to a University building on Alexander Road to pull on their fire jackets, fire pants, boots and helmets. They climbed into a white SUV with "Princeton Fire Department" on its side and went to Fire Station 61, where they got into a fire truck and drove to the scene.

Working with members of the Princeton Fire Department, the four investigated a report of a malfunctioning air-conditioning unit at Borough Hall. Allen, a code analyst in design and construction, and Machusak, a project manager in grounds and building maintenance, went up to the building's roof to inspect the unit that set off the smoke alarm. There was no fire. An hour later, they were back at work at the University.

"It felt good to be able to help," Machusak said.

The four employees are part of a pilot program launched at the University this fall in which staff members volunteer with the Princeton Fire Department during their work shifts. Twenty-four employees are participating in the program, which in its first year includes two departments: facilities and public safety. Sixteen of the employees already are trained as volunteer firefighters, and the other eight are undergoing training.

The program's goal is to help augment the number of firefighters who are available to respond to a daytime call in Princeton.

"One of the largest challenges for the Princeton Fire Department is that many of its members who are normally available during nights and weekends work at a job outside of Princeton during the day," said Roger Demareski, assistant vice president for facilities, who has led the planning effort on the University side and also is volunteering in the program.

The department averages 900 calls a year, more than a typical all-volunteer department in New Jersey receives, according to Mark Freda, Princeton Borough's new director of emergency and safety services. Established in 1788, it is one of the country's oldest fire departments.

"The program is a great help," said Princeton Fire Chief Dan Tomalin. "We have a shortage of volunteers, and having the University commit to this program allows us to stop relying on mutual aid from surrounding towns during the day and gets our apparatus on the road a lot quicker."

A few University students and employees have served as volunteer firefighters prior to the new pilot program. But the addition of dedicated daytime volunteers has provided much-needed aid to the department, said Robert Bruschi, the borough administrator for Princeton.

"It was getting increasingly difficult to get volunteers to commit to the training and to commit long term to be members of fire department," he said. "The program gives us a much higher confidence level that we'll have enough people responding to fire calls during the daytime."

Mildred Trotman, the mayor of Princeton Borough, said, "The Princeton community is fortunate that the University is willing to make these staff members available to provide this critical emergency response service and that these dedicated individuals are willing to serve our community in this way." 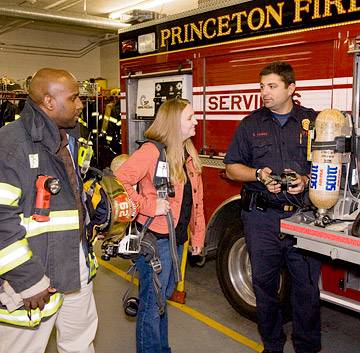 Sandra Kearney (middle), an administrative assistant in facilities, has been a volunteer firefighter in Cranbury for 14 years and now participates in the Princeton program. Here, she talks with Twylen Hicks (left), the University's assistant fire marshal and a participant in the program, and Roy James, deputy chief of the Princeton Fire Department. (Photo: Denise Applewhite)

The campus volunteers carry fire department pagers while on the job at the University. Four or five employees are on call each workday. When a call comes in, those employees prepare to help -- if they are working on something that they are able to leave -- by gathering at the building on Alexander Road, where they keep their gear and an emergency response vehicle. They are dispatched through the Princeton Fire Department as a group to the scene or to a firehouse. If there is a major emergency, all employees in the program are encouraged to respond.

Michael McKay, vice president for facilities, said the program allows "our staff to become even more integrated into the local community and in a way that mutually benefits this institution and the community. The volunteers are already people who value service to others in their home communities, and for them to leverage that and their skills more broadly is a great opportunity."

The program "is giving us a lot more flexibility to get more firefighters and more apparatus to the scene," Freda said. "We have a lot more resources to use."

Freda's position, which was created last summer, is funded through a $100,000 annual contribution from the University. Freda serves as the borough's emergency management coordinator and oversees fire department administrative responsibilities.

Since they began responding to calls in late September, the University's firefighters have gone on service calls such as gas leaks, car accidents, downed power wires and residential and commercial fire alarms.

Robert Talarick, the shop foreman in the heating, ventilation and air conditioning control shop, has gone on several calls so far. "I'm helping out the community and having fun doing it," he said. Talarick has been a volunteer firefighter for 30 years in Rocky Hill and Princeton. "Getting people to volunteer these days is not easy," he said. 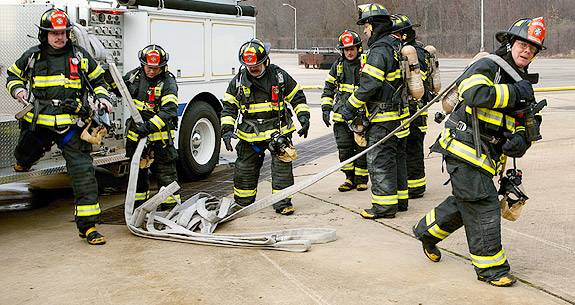 Eight University employees attended training sessions at the Mercer County Fire School twice a week for eight hours a day, for a total of 130 hours. Their attendance, which occured during work hours, was covered by release time from the University. They went through a graduation ceremony on campus on Dec. 18.

Antonino Maio, who works at the University's fire protection shop as a technical mechanic, has enjoyed his fire school training.

"This is something I've been interested in doing for a very long time, but I never had the time or opportunity to do it," he said. "The best part about participating in this program is knowing that I will be part of a team that can assist the community in an emergency."

Sandra Kearney, who is Demareski's assistant, joined the Cranbury Fire Department 14 years ago, when she was a senior in high school.

"There are many reasons why volunteering as a firefighter is rewarding," Kearney said. "The first being that you are helping people. But you aren't just helping people because it is your job and you get paid for it. You are there to help them because you want to be and you enjoy it. Another reason I love being a volunteer is the second family you inherit. The men and women you stand next to really become like a second family."

Members of the pilot program meet once a month for practice drills and other training exercises. These sessions are open to all members of the Princeton Fire Department.

After the pilot program is completed next year, the University hopes to open it to employees in other departments. Staff members in human resources and athletics have expressed interest in joining. The program also will expand to include students interested in training to be firefighters. The application process includes medical and background checks.

Bob Gregory, the University's fire marshal, has been managing the day-to-day operations for the group and serving as the main liaison from the campus to the fire department. He also has organized the training and sets up the response schedule. For more information on joining the program, contact Gregory at (609) 258-6805. 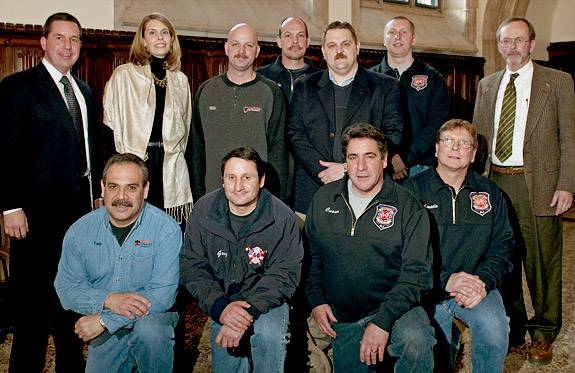