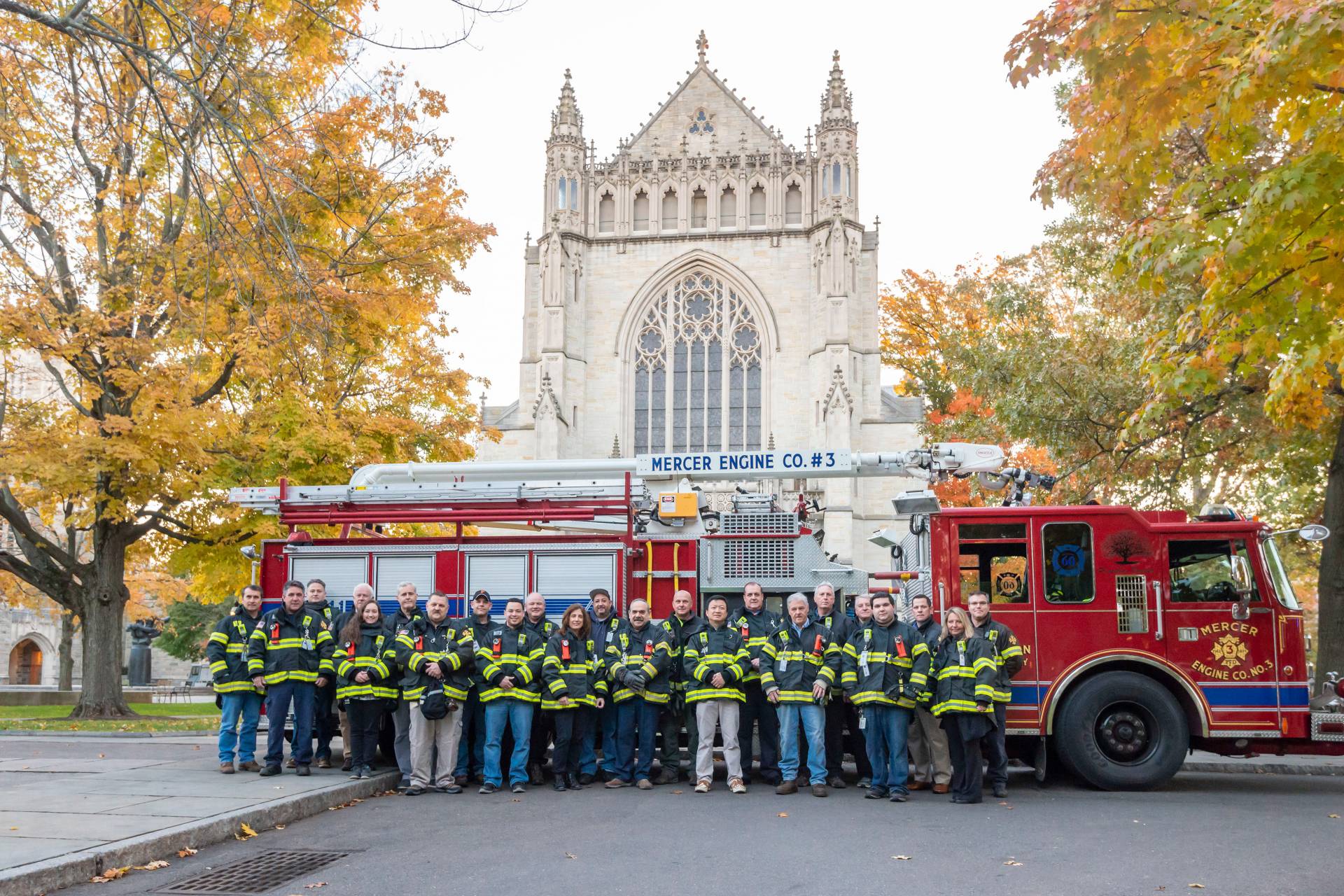 Princeton University employees volunteer as municipal firefighters through the Princeton Fire Department Associate Member Program. Here, the associate members gathered for a group photo last fall in front of the University Chapel. The University volunteers respond to calls on and off campus, augmenting the department’s ranks during critical daytime hours.

When the Princeton Fire Department sounded the alarm for more volunteers, Princeton University responded to the call. In fact, University employees have responded to nearly 1,950 fire and rescue calls over the past 10 years as part of a unique partnership.

The Princeton Fire Department Associate Member Program allows University employees to volunteer as firefighters during their work shifts, augmenting the municipal department’s ranks during critical daytime hours. The University volunteers respond to emergencies both on and off campus.

The program launched as a pilot in 2009 as the fire department experienced a decline in members, particularly during the day when volunteers were busy working, many far from Princeton. While University employees and students have long volunteered on their own with the fire department (as well as the Princeton First Aid and Rescue Squad), the program was the first formal partnership of its kind between the University and Princeton Fire Department.

“A University associate is a full member of the Princeton Fire Department and is rightly considered a Princeton firefighter on equal standing with those who live in Princeton,” said Princeton Councilman and Fire Commissioner Tim Quinn. “There’s no doubt the University program has enabled the fire department to remain all volunteer for longer than it would have otherwise. This has allowed the municipality to hold down taxes and utilize revenue for other services.”

Quinn said the partnership exemplifies a spirit of cooperation between the University and town that extends into other areas of civic life.

“There’s a camaraderie among firefighters that I’ve witnessed between University staff and our homegrown members,” Quinn said. “They’ve gone through the same training and share a strong desire to serve and a sense of duty that reflects the importance of their work.”

“I’m not aware of any other partnership that exists like this anywhere,” Loh said. “This is a benefit to the Princeton community and beyond because staff also volunteer as firefighters in their hometowns on nights and weekends.”

The associate program is open to all staff and faculty and no prior experience is required. The University will provide release time for employees to attend firefighter certification classes and trainings during business hours, with approval from supervisors. Employees interested in joining can contact Loh for more information.

“We have trained 29 new firefighters since the program began. They range in age from 25 to 55 years old,” said Craig Stapfer, assistant director of life safety in Facilities Site Protection. “We are always looking for new volunteers and we’re actually putting the final touches on sending another group to the Firefighter 1 class. Our only requirement is that you have the interest; we will provide the training and support.”

Caitlin Root, who worked in Environmental Health and Safety and recently moved to Oak Ridge, Tennessee, never would have become a firefighter without the associate program.

“The University is so supportive of employees who want to join,” she said. “It’s definitely hard work, but well worth it.”

University volunteers are assigned one duty day per week, though they are not required to respond to every call. The volunteers use a fire truck at the 306 Alexander Road substation so they can travel to calls together and meet other department firefighters on scene.

And sometimes the University volunteers don’t have far to travel if the emergency call is coming from campus.

“Many of us work in Facilities and have the floor plans of University buildings in our heads,” said Kevin Durham, manager for critical systems in Facilities. “We can get to the building quickly and know right where to go once we’re inside.”

Quinn hopes the associate program will continue to grow, even as the Princeton Fire Department transitions to a combination of paid and volunteer firefighters.

“The rate of volunteerism continues to decline nationwide. While our days are covered by the University associates, the town is having increasing difficulty attracting volunteers who can commit to being on call evenings and weekends,” Quinn said. “Even though we are now transitioning to a combination department, our University associates will remain a crucial part of fire safety in Princeton.”