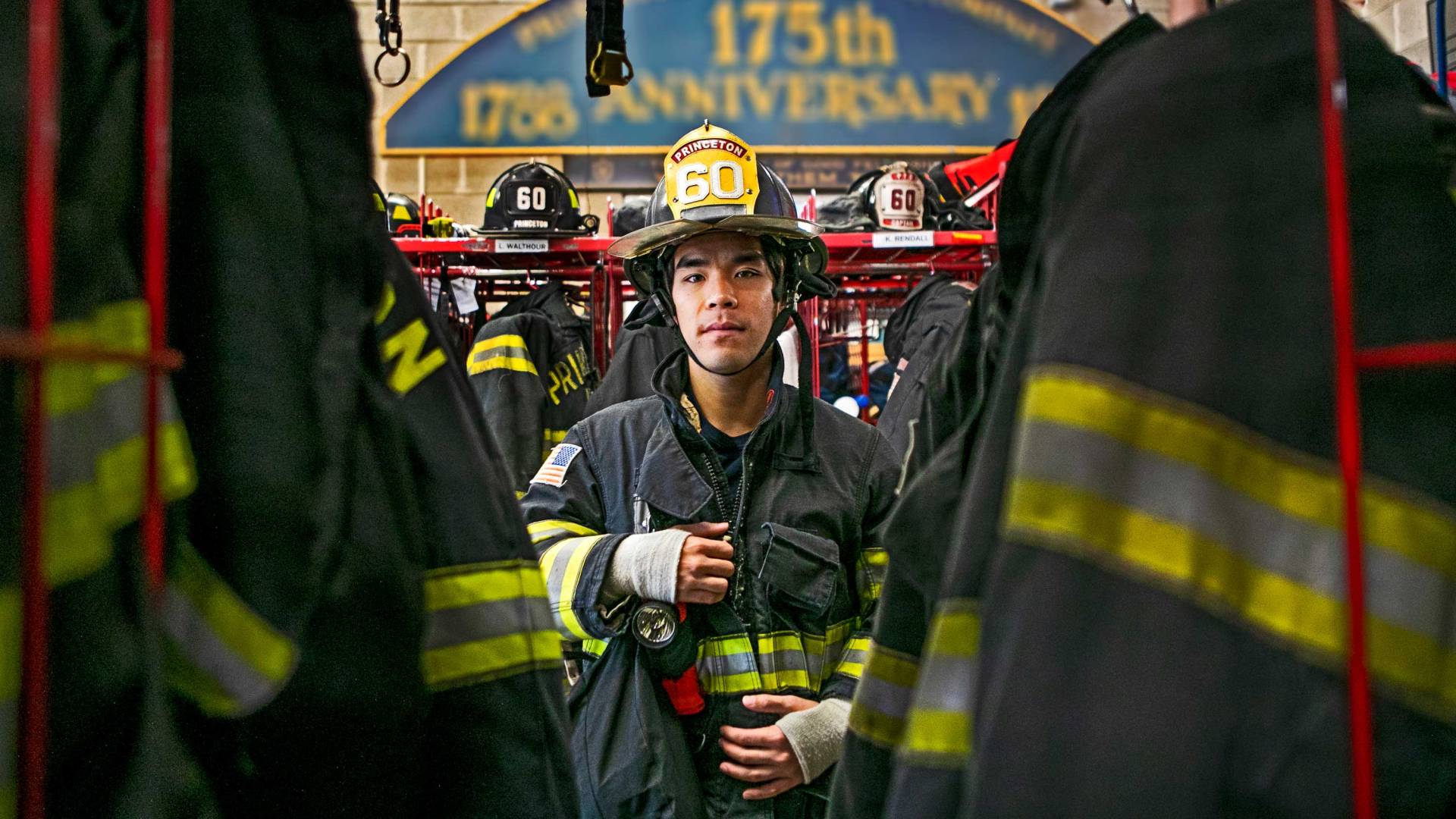 Max Nguyen, a Princeton University graduate student in integrative genomics, suits up for duty as a firefighter for Princeton Engine Company No. 1.

Four Princeton University graduate students have been inducted as members of the Princeton Fire Department. The largest number of Princeton graduate students to join the town’s fire brigade at one time, they follow in the footsteps of countless others from the University community who have stepped up to protect the campus and its surrounding municipality. 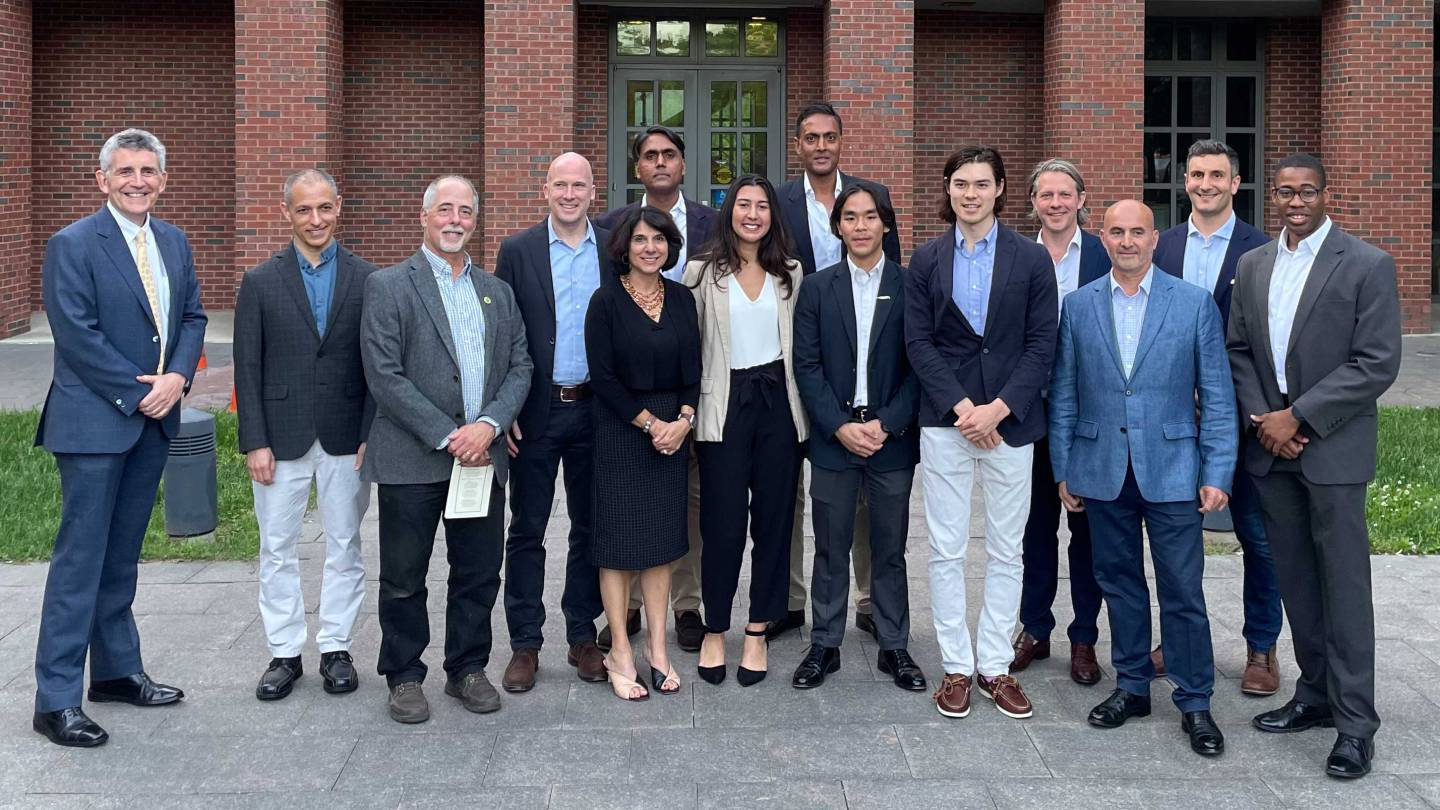 Among the 11 new members of Princeton Fire Department’s sworn in on May 25 were Max Nguyen, a graduate student in the Lewis-Sigler Institute for Integrative Genomics, and Johana De la Cruz, Jonathan Lowry and Shua-Kym McLean, graduate students in the Princeton School of Public and International Affairs. Nguyen is assigned to Princeton Engine Company No. 1. De la Cruz, Lowry and McClean are assigned to Mercer Engine Company No. 3.

“We have had a long history of very active Princeton students,” said Deputy Chief Alexander Ridings. “At a time when volunteerism is in such decline — across the country, really — having a base group of people who are interested in service is a huge benefit that Princeton has that many of our surrounding communities don’t.”

The four Princeton University graduate students will join a department comprising approximately six career firefighters, 35 volunteers and 31 associate members. Until 2020, the Princeton Fire Department was one of the oldest remaining all-volunteer fire departments in New Jersey, largely thanks to the cadre of Princeton University-affiliated members who have volunteered with the department over many years.

Volunteers must be over age 18 to apply and are required to complete a 200-hour, state-mandated firefighter training.

De la Cruz said since training was held primarily in the evening, she was able to balance her academic work with her volunteerism. She found that both her classmates and her fire department colleagues were supportive of her throughout.

“I wanted to feel connected to the town of Princeton and contribute in a way that was necessary and impactful,” she said. “Princeton and the surrounding areas are our homes during the years in which we live here. I think it is important to leave places we call home better than we found them and use our privilege to help the community.”

Nguyen said he joined the Princeton Fire Department for much the same reason. “To want to help others and to take an active role in the community that you are a member of are both fundamental values that I think everyone can get behind,” he said.

For Nguyen, being a firefighter and a student can feel at times like living two separate lives, he said. “By day, I am handling my responsibilities as a student and taking care of the other things that go with daily life, and then night comes, and now I am suiting up for the firefighter training academy or I am waiting for emergency calls in the middle of the night when on duty,” he said.

Fortunately, Nguyen has found his superiors to be flexible and accommodating of his academic responsibilities. “The two have been quite complementary in terms of scheduling,” he said. “The Princeton Fire Department realizes all of the volunteers already lead very busy lives and has been very accommodating in setting up training time and schedules that work for everyone.”

The Princeton Fire Department’s daytime staffing is supplemented through its Associate Member Program, which allows University employees to volunteer as firefighters during their work shifts, augmenting the municipal department’s ranks during critical daytime hours. The University volunteers respond to emergencies both on and off campus.

“Because of changing demographics, as a town we don’t have that population of volunteers that is available during the day,” Ridings said. “And so typically, that is when we are most short staffed. This is a very helpful partnership that allows us to ensure adequate staffing.”

Nguyen said he is glad to be able to give back to the community as a full volunteer member.

“I think it can be very easy to get isolated inside the Princeton University bubble dealing with your own mountain of academics and your own personal life,” he said. “At the same time, I think it is important to realize that all of us students eventually have to transition from the shelter of university life to the regular world, where we will have the chance to be leaders and difference-makers within the community. Why not take this chance to learn and to start practicing ways to make an impact on our community now?"