Princeton legal philosopher and constitutional scholar Robert George has been awarded the Honorific Medal for the Defense of Human Rights of the Republic of Poland, which recognizes outstanding achievement in the field of human rights.

George was chosen for the honor by Poland's Commissioner for Civil Rights Protection Janusz Kochanowski, who died in the April 10 plane crash that also killed the country's president and dozens of political and military leaders. 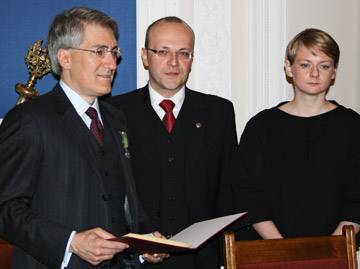 At Princeton, George is the McCormick Professor of Jurisprudence, a professor of politics and the director of the James Madison Program in American Ideals and Institutions. He is the author or co-author of several books, including "Body-Self Dualism in Contemporary Ethics and Politics," "Embryo: A Defense of Human Life," "The Clash of Orthodoxies: Law, Religion and Morality in Crisis," "In Defense of Natural Law" and "Making Men Moral: Civil Liberties and Public Morality."

He has served as a presidential appointee to the U.S. Commission on Civil Rights and as a member of the President's Council on Bioethics. He was a judicial fellow at the Supreme Court of the United States, where he received the Justice Tom C. Clark Award. He currently serves on UNESCO's World Commission on the Ethics of Scientific Knowledge and Technology, and is a member of the Council on Foreign Relations.

Among George's other honors are the Presidential Citizens Medal, the Bradley Prize for Intellectual and Civic Achievement, the Philip Merrill Award for Distinguished Contributions to the Liberal Arts, and honorary doctorates of law, ethics, letters, science, civil law, humane letters and juridical science.