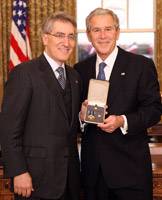 Robert George, Princeton's McCormick Professor of Jurisprudence, received the Presidential Citizens Medal at a ceremony at the White House on Dec. 10. The medal, awarded in recognition of exemplary deeds of service to the nation, is one of the highest honors a president can confer on a civilian.

Two Princeton alumni, Wendy Kopp and James Billington, also were among the 24 recipients honored by President George W. Bush. More than 100 people have received the medal since it was established in 1969.

George, a distinguished constitutional scholar, is the director of Princeton's James Madison Program in American Ideals and Institutions and a member of the U.S. President's Council on Bioethics. Last spring he received the Heritage Foundation's $25,000 Salvatori Prize for American Citizenship for embodying the virtues of America's founders. He was selected in November as the U.S. member of the World Commission on the Ethics of Scientific Knowledge and Technology, an advisory board of the United Nations.

George previously served as a presidential appointee to the United States Commission on Civil Rights and as a judicial fellow at the Supreme Court of the United States. He is the author of several books, including "In Defense of Natural Law," "Making Men Moral: Civil Liberties and Public Morality" and "Embryo: A Defense of Human Life."

Kopp, a 1989 Princeton graduate, is the founder of Teach for America, which trains teachers to work in low-income communities. Billington, a member of the class of 1950, has served as the librarian of Congress since 1987 and previously was a faculty member in history at Princeton.