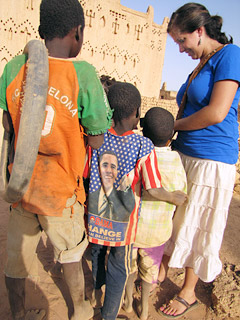 Princeton in Africa celebrates its 10th anniversary this year with 25 fellows currently on yearlong fellowships with a range of nongovernmental organizations that work across the continent helping underserved populations. Jessica Grody, shown here visiting with children in Bani, Burkina Faso, is researching ceramic water filters as a cost-effective and culturally appropriate way for rural communities to purify their drinking water. (Photos: Courtesy of Princeton in Africa)

Ten years ago, Princeton alumnus Steven Feldstein spent a year in Rwanda assessing orphanages and documenting the lives of street children as part of his work for a humanitarian relief organization. Feldstein was in Africa with the first group of University graduates to participate in the Princeton in Africa program, an experience that has shaped his working life.

Today, as a professional staff member for the U.S. Senate Foreign Relations Committee, Feldstein works on allocating foreign assistance to developing countries and often reflects upon his time with Princeton in Africa.

"Having had that experience on the ground -- and seeing from both ends how the system works -- I got an important insight into crafting policies from this end," said Feldstein, a member of the class of 2000 who majored in politics. After his time in Rwanda, Feldstein studied international law and worked for the State Department on development issues. Princeton in Africa "was my first entry point into this field, and I've engaged in these issues on a daily basis since," he said.

Now marking its 10th anniversary, Princeton in Africa has expanded significantly over the last decade, and many of its graduates have remained involved with issues in Africa. Founded by a group of alumni, faculty and staff, Princeton in Africa is an independent affiliate of the University funded by donations. The program offers yearlong fellowships with a range of nongovernmental organizations that work across Africa with the goal of effectively supporting the continent's underserved populations.

"Our fellows have studied Africa and development work in college, and they want to take the experience out of books and into the field," said Cordelia Persen, executive director of Princeton in Africa. "Seeing Africa firsthand is a totally different learning experience."

In 2000, Feldstein was one of four Princeton alumni who headed to Africa for a fellowship. This summer the program will send 26 students to 18 countries to work in public health, education, conservation, post-conflict reconstruction and other areas.

In the past the program has accepted only Princeton seniors and alumni, but for the first time this year, those without a Princeton affiliation may apply. The new parameters have led to a fourfold increase in applicants.

"Our fellows asked us to open the program to non-Princetonians" because they frequently met people who wanted to apply but didn't attend the University, Persen said. "They told us they knew so many qualified people who could bloom with this opportunity."

By admitting qualified applicants from any school, the program is offering a broader array of skill sets and talents to partner organizations, Persen said.

Feldstein is among many of the program's 200 alumni who have continued to pursue work or study related to Africa. 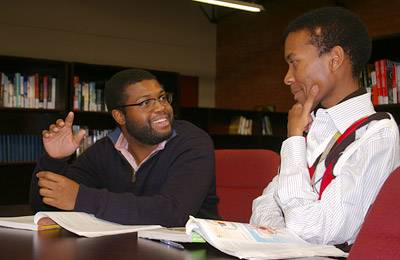 Ettie Philitas, left, a member of the class of 2007, helps a student prepare for A-level exams at African Leadership Academy in Johannesburg, South Africa.

"A huge portion of our fellows stay involved in Africa, and a lot of them go into service fields," Persen said. "Our mission is to create young leaders who are committed to Africa's development."

Students in medical school have done monthlong rotations in Africa. Former fellows who became lawyers have undertaken pro bono work for African governments. Many fellows have returned during their summer breaks from graduate school.

After completing her fellowship with a South African program that grooms teenagers from 54 African nations to be future leaders on the continent, alumna Yuting Beverly Lien stayed for a second year -- as about 20 percent of Princeton in Africa participants do -- to witness the opening of the school, called African Leadership Academy, that she helped to create in Johannesburg. She now is working for a nonprofit organization in New York.

"Living in Africa was the most rewarding two-year period of my life," said Lien, a graduate of the class of 2006 who was a concentrator in the Woodrow Wilson School of Public and International Affairs. "I think I will forever have this special place in my heart for Africa."

"I wanted to continue to be engaged in international development and emerging economies," she said. "Professionally, Princeton in Africa opened me up to understand what it's like to work in an emerging market and apply that to many different contexts."

Ettie Philitas, who graduated in the class of 2007, currently is finishing his fellowship in Johannesburg, also with African Leadership Academy, and like Lien, he plans to stay in South Africa for a second year.

"The cultural and professional opportunities here can't be fully explored within one year," Philitas said. "Coming to a nation with 11 official languages and a plethora of ethnicities has catalyzed my curiosity beyond belief."

Philitas, who earned his degree in French and Italian, has carried out many assignments for African Leadership Academy, from developing an SAT preparation program to helping execute renovations at the academy's facilities. In his spare time, he works with students in the Umuzi Photo Club teaching visual literacy to youngsters in poor neighborhoods of Johannesburg.

"While these neighborhoods can be depicted as dangerous and crime-ridden, I've found them to be the most culturally rich, and those which most poignantly evoke the spirit of the South African people," he said.

After graduating from Princeton last year, Jessica Grody is finishing her year in Burkina Faso, where she is researching ceramic water filters as a cost-effective and culturally appropriate way for rural communities to purify their drinking water. Her research combines microbiology and social science, so in addition to testing filtered water for bacterial content, she is interviewing residents about their water consumption habits and their concerns about the filtering system.

"It has been wonderful to experience an entirely new environment while still being able to rely on a Princeton support network to help navigate the challenges of living and working abroad," said Grody, who earned her degree in ecology and evolutionary biology with a certificate in environmental studies.

She also is learning that living in another country means adapting to the ways of another culture.

"When you see people you know, you absolutely must stop, say hello and ask how they are doing," Grody wrote in an article for the Princeton in Africa newsletter. "This means I have to allow an extra 10 minutes to get anywhere to make sure I have time to greet everyone I meet."

This summer, a new class of Princeton in Africa fellows will disperse across the continent to begin their work. Senior Chris Courtin will head to Kenya to help build a village near Kitui for orphaned children. A major in mechanical and aerospace engineering, he will work on the design of a rainwater harvesting system to collect water during the rainy season and store it for later use. He applied to Princeton in Africa after taking trips to Ethiopia and Sierra Leone with the Princeton chapter of Engineers Without Borders, which works to improve quality of life in developing communities through sustainable engineering initiatives.

"I found those very exciting and rewarding experiences, so different from anything I would have experienced anywhere else," he said. "It's a nice feeling to know you're able to do even a little bit to help those who need it most."

At Reunions, Princeton in Africa will host a panel celebrating its 10th anniversary, with several past fellows, including Feldstein, talking about their experiences in Africa.

"My fellowship was an unparalleled opportunity," Feldstein said.

Princeton in Africa will commemorate its 10th anniversary during Reunions with a panel of former fellows discussing their yearlong fellowships with nongovernmental organizations that help Africa's underserved populations. The panel will take place at 10 a.m. Saturday, May 29, in McCosh Hall, Room 62. For more information, call (609) 258-7215 or visit Princeton in Africa.

Project_55, in the nation's service