During her freshman writing seminar, "Wit and Folly in the Age of Shakespeare," Princeton senior Marguerite Colson experienced a moment that changed her approach to every class she took after that.

The seminar's close analysis of essay structure and the methods a writer uses to develop an argument convinced Colson that "the way I had written before wasn't going to cut it," she said. When working on an essay for the class, she realized she needed to finish the assignment a few days before the deadline to leave time to "analyze it and take it apart and put it back together."

The development of her writing skills helped Colson to become the highest-ranking history major in the class of 2010 and the class salutatorian. As such, she will continue the Princeton tradition of delivering a speech in Latin, one of her key areas of study, at Commencement on Tuesday, June 1.

Colson's proficiency in Latin is matched by her incisive critical writing about the material, said Professor of Classics Andrew Feldherr.

"I consider her one of the most gifted analysts of literature I have taught at Princeton," said Feldherr, who taught Colson in a course on Latin elegy. "Her translations were consistently letter perfect, and her oral presentation and essay set a very high standard for sophisticated and informed literary engagement with the material." 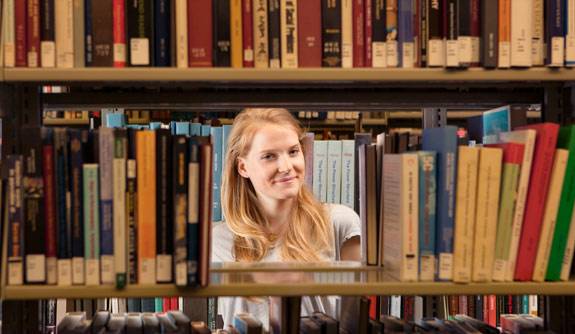 Salutatorian Marguerite Colson loves "the neat combination of logic and math and literary analysis" in Latin classes. She will continue the Princeton tradition of delivering a speech in Latin at Commencement on Tuesday, June 1. (Photo: Brian Wilson)

Colson is earning a certificate in the language and culture of ancient Rome. She started studying Latin in sixth grade, and said she loves "the neat combination of logic and math and literary analysis" in Latin classes. She especially liked her Princeton courses on Virgil's "Aeneid" and the Roman Republic, which she took her first year at Princeton.

Colson won the Shapiro Prize for Academic Excellence and the Quin Morton '36 Writing Seminar Essay Prize her freshman year. Over the course of her Princeton years, she applied her writing and analytical talents to excel in her major in history.

A native of Manhattan, Colson wrote a junior paper about a 1741 slave conspiracy in colonial New York City. She wrote another about the American involvement in the 1953 coup in Iran; however, her true love is 20th-century American history, she said. For her senior thesis, she examined the life of Edward Stettinius, who served as U.S. secretary of state under presidents Franklin Roosevelt and Harry Truman and oversaw the creation of the United Nations. No biography of Stettinius has been written, perhaps because he lasted just seven months in the position before being fired by Truman, who inherited him when Roosevelt died in office.

"Stettinius was kind of a lost figure in history," Colson said. "I saw this as an opportunity to give him a second look."

She traveled to Truman's presidential library in Missouri and made some tantalizing discoveries, such as a letter in which Truman referred to Stettinius' replacement by the same title "secretary of state" three weeks before firing Stettinius.

The greatest pleasure of writing the senior thesis, Colson said, is that it enables you to "surround yourself with material and let yourself find evidence for an argument."

Colson also has relished taking a variety of courses outside her major and getting involved in a number of extracurricular projects.

"You don’t have to settle down here. You can do a lot of things you love," she said.

Inspired by her experience in her freshman writing seminar, Colson became a fellow at the Writing Center, where for three years she helped graduate students with fellowship applications, seniors with their theses and freshmen with their first college papers.

"I think you can learn a lot about your own writing from reading other people's," she said.

At the Writing Center, she has excelled at providing "that crucial outside perspective and sympathetic ear for other writers," said Amanda Irwin Wilkins, director of the Princeton Writing Program, which oversees the center. "The students she has worked with remark on what a good listener she is, always attentive and encouraging as they develop their ideas and refine their arguments."

Colson also has served as a tutor for English as a Second Language and a volunteer at Princeton Nursery School through the University's Community House civic engagement organization.

Starting this summer, she will be a yearlong fellow with the Project 55 alumni service group, working as an intern for the next year at the Manhattan District Attorney's Office in the Investigation Division Central unit, which prosecutes white-collar crimes. She hopes the fellowship will help her decide whether to go to law school.

"I love the idea of marshalling evidence and looking at many different perspectives and counterarguments before forming your argument," she said. "It's a career that would keep me reading and writing."