A Princeton University-led research team has developed the capability to produce realistic movies of earthquakes based on complex computer simulations that can be made available worldwide within hours of a disastrous upheaval.

The videos show waves of ground motion spreading out from an epicenter. In making them widely available, the team of computational seismologists and computer scientists aims to aid researchers working to improve understanding of earthquakes and develop better maps of the Earth's interior.

"In our view, this could truly change seismic science," said Princeton's Jeroen Tromp, a professor of geosciences and applied and computational mathematics, who led the effort. "The better we understand what happens during earthquakes, the better prepared we can be. In addition, advances in understanding seismic waves can aid basic science efforts, helping us understand the underlying physics at work in the Earth's interior. These visualizations, we believe, will add greatly to the research effort.''

In a scientific paper describing the system, which appeared online Sept. 16 and will be published in the October 2010 Geophysical Journal International, the team describes how it creates the videos. The movies will be made available for free to scientists and members of the public and news organizations interested in featuring such images on television and the Internet. The easily downloadable videos can be viewed at: global.shakemovie.princeton.edu. They tell the story in a language that is easy to understand, said Tromp, who also is the director of the Princeton Institute for Computational Science and Engineering (PICSciE).

Watch one of the earthquake videos(Video by Jeroen Tromp)

When an earthquake takes place, data from seismograms measuring ground motion are collected by a worldwide network of more than 1,800 seismographic stations operated by members of the international Federation of Digital Seismograph Networks. The earthquake's location, depth and intensity also are determined. The ShakeMovie system at Princeton will now collect these recordings automatically using the Internet.

The scientists will input the recorded data into a computer model that creates a "virtual earthquake." The videos will incorporate both real data and computer simulations known as synthetic seismograms. These simulations fill the gaps between the actual ground motion recorded at specific locations in the region, providing a more complete view of the earthquake.

The animations rely on software that produces numerical simulations of seismic wave propagation in sedimentary basins. The software computes the motion of the Earth in three dimensions based on the actual earthquake recordings, as well as what is known about the subsurface structure of the region. The shape of underground geological structures in the area not recorded on seismograms is key, Tromp said, as the structures can greatly affect wave motion by bending, speeding, slowing or simply reflecting energy. The simulations are created on a parallel processing computer cluster built and maintained by  PICSciE and on a computer cluster located at the San Diego Supercomputing Center.

After the three-dimensional simulations are computed, the software program plugs in data capturing surface motion, including displacement, velocity and acceleration, and maps it onto the topography of the region around the earthquake. The movies then are automatically published via the ShakeMovie portal. An e-mail also is sent to subscribers, including researchers, news media and the public.

The simulations will be made available to scientists through the data management center of the Incorporated Research Institutions for Seismology (IRIS) in Seattle. The organization distributes global scientific data to the seismological community via the Internet. Scientists can visit the IRIS website and download information. Due to the research team's work, they now will be able to compare seismograms directly with synthetic versions. 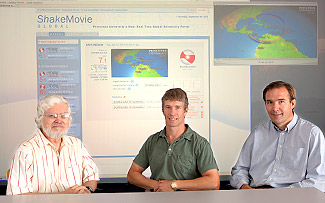 A Princeton University-led team has developed realistic movies of earthquakes based on complex computer simulations. The group of researchers includes (from left): Dennis McRitchie, a lead high-performance computing analyst in Princeton's Office of Information Technology; Curtis Hillegas, director of research computing in the Office of Information Technology; and Jeroen Tromp, a professor of geosciences and applied and computational mathematics, who led the effort. (Photo by Brian Wilson)

Advanced computing power made the synthetic seismograms possible, according to Dennis McRitchie, another author on the paper and a lead high-performance computing analyst for Princeton's Office of Information Technology. "This is computationally intensive -- it takes five hours to produce a 100-minute simulation," McRitchie said. The effort to numerically solve the differential equations that govern how the waves propagate through these complicated earth models requires 384 computers operating in parallel to analyze and process the numbers.

When an earthquake occurs, seismic waves are generated that propagate away from the fault rupture and course along the Earth's surface. The videos show the up-and-down motion of the waves in red (up) and blue (down). Strong red waves indicate rapid upward motion. Strong blue waves indicate the Earth's surface is moving quickly downward. The simulation shows that the waves are of uneven strength in different areas, depending on the quality of the soil and the orientation of the earthquake fault. When the waves pass through soft, sedimentary soils, they slow down and gain strength. Waves speed up through hard rock, lessening the impact on surface areas above. A clock in the video shows the time since the earthquake occurred.

The ShakeMovie portal showing earthquakes around the world is similar to one maintained at the California Institute of Technology that routinely does simulations of seismic events in the Southern California region.

Earthquake movies will be available for download about 1.5 hours after the occurrence of a quake of magnitude 5.5 or greater.

In addition to Tromp and McRitchie, other Princeton scientists on the paper include Ebru Bozdag and Daniel Peter, postdoctoral fellows, and Hejun Zhu, a graduate student, all in the Department of Geosciences. The development of the simulations also involved staff at PICSciE as well as Robert Knight, a lead high-performance computing analyst and others in Princeton's Office of Information Technology.

Other authors on the paper include: Dimitri Komatisch of the Universite de Pau et des Pays de L'Adour in Paris; Vala Hjorleifsdottir of Lamont-Doherty Earth Observatory of Columbia University; Qinya Liu of the University of Toronto; Paul Friberg of Instrumental Software Technologies in New York; and Chad Trabant and Alex Hutko of IRIS.