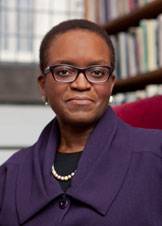 Valerie Smith, a distinguished scholar of literature who led a major expansion of Princeton's interdisciplinary Center for African American Studies, has been named the University's next dean of the college.

Smith's appointment as the senior officer responsible for Princeton's undergraduate academic program is effective July 1, 2011. She will succeed Nancy Weiss Malkiel, the longest-serving dean of the college, who will step down from that position after 24 years at the end of this academic year.

"As an eminent scholar, exceptional teacher and experienced leader, Val Smith is ideally suited to serve as the next dean of the college and to enrich Princeton's commitment to undergraduate education," said Princeton President Shirley M. Tilghman. "During her tenure as director of the Center for African American Studies, she forged successful collaborations with departments campuswide. In that position and in her roles as scholar and teacher, she has impressed colleagues and students with her collegial and collaborative attitude, her personal warmth and her deep understanding of Princeton's animating values. I am delighted that she has agreed to take on the enormously important responsibilities of her new office."

As part of its oversight of Princeton's undergraduate curriculum, the Office of the Dean of the College is responsible for supervising the residential college system and other services and agencies designed to promote the intellectual development of undergraduates, including study abroad and fellowships. The dean of the college also oversees the admission and financial aid offices.

Provost Christopher Eisgruber, to whom Smith will report, said, "Val is just what Princeton needs: a visionary and empathetic leader who will build on the great strengths of this University's undergraduate program and cooperate enthusiastically with faculty members, students and administrators to develop new initiatives and respond to emerging needs. She resonates with the unique synthesis of a research university and a teaching college that we have here at Princeton. I expect that she will be eager to listen to viewpoints from throughout the Princeton community and to work collaboratively with students and colleagues to define priorities for the college."

"I am honored to have been selected to be the next dean of the college," Smith said. "Princeton occupies a unique role as a premier research institution with a profound commitment to undergraduate education. I look forward to building on Nancy Weiss Malkiel's distinguished legacy as dean. Both within and beyond the world of higher education we face myriad rapid and profound changes, including the impact of globalization, the rise of new media and the uncertain economic climate. I am committed to working with students, faculty, administrators and alumni both to maintain the college's historic excellence and distinctive role within the University and to respond to these challenges thoughtfully and creatively."

Smith was a faculty member at Princeton from 1980 to 1989, then returned to the University in 2001 after 11 years at the University of California, Los Angeles. She became director of the Program in African American Studies in 2002 and oversaw its expansion into an academic center beginning in 2006.

Under Smith's direction, the Center for African American Studies built the number of core faculty positions allocated to the center from two members to its current total of 17. Associated and affiliated faculty members in other departments now contribute an additional 18 faculty. The center also has increased courses by more than 40 percent as part of its efforts to encourage students of varying backgrounds to encounter and reflect on the history of race in the nation through a unique interdisciplinary approach.

In 2009 Smith received the President's Award for Distinguished Teaching, which recognizes excellence in undergraduate and graduate teaching by Princeton faculty members. Students who nominated Smith for the award noted that she inspired them to think critically, encouraged them to speak their minds and listened carefully to their ideas.

Eisgruber, who chaired the search committee for the position, said, "Val emerged from an exceptionally strong field of candidates for this deanship. The position of dean of the college at Princeton is one of higher education's most attractive leadership roles, and the opening drew talented applicants from both inside and outside the University."

"I'm personally very happy and excited about Professor Smith's appointment," said senior Veronica Shi, a search committee member. "She deeply impressed me with her graceful and methodical grasp of the important issues and challenges facing Princeton's undergraduate program. In particular, she showed a heartfelt understanding of the importance of a liberal education, and was able to articulate its necessity in a way that inspired the listener while translating into a well-thought-out set of policies. She has everything it takes to be a valuable and persuasive spokesperson for liberal education both within Princeton for the undergraduate body and outside of Princeton on a national stage.

"Another strength the committee saw in her was a graceful balance of gravitas and approachability: She has the quiet dignity of an effective and well-respected leader, but the warmth of an esteemed mentor," Shi added. "I think students will find her a compassionate and understanding dean who will listen carefully to their concerns, and whom they will see much outside of West College."

Senior Michael Weinberg, a search committee member and chair of the Undergraduate Student Government's Undergraduate Life Committee, said, "Professor Smith is an extraordinary scholar, teacher and mentor with a deep commitment to liberal arts education. She is an inspiring leader who will think creatively and consult widely in order to improve an already outstanding undergraduate program. Professor Smith is intellectually stimulated by interactions with students and she will engage the student body as a part of her decision-making process."

Smith is the author of "Not Just Race, Not Just Gender: Black Feminist Readings," "Self-Discovery and Authority in Afro-American Narrative" and the forthcoming "Toni Morrison: Writing the Moral Imagination." She has edited "African-American Writers," "New Essays on Song of Solomon" and "Representing Blackness: Issues in Film and Video." She also has published more than 50 articles, essays and reviews. Smith currently is working on a book about memory and the civil rights movement.

A Phi Beta Kappa graduate of Bates College, Smith holds a Ph.D. from the University of Virginia.