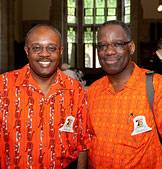 Jerry Blakemore (left) and Fred Dashiell of Princeton's class of 1976 enjoy a reception in Firestone Lounge of Rockefeller College while celebrating their 35th reunion. They were among thousands of alumni returning to campus to participate in the University's annual Reunions festivities. 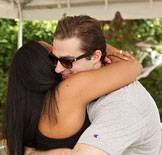 Krysta Banfield (left), a member of the class of 2007, welcomes Tim Boardman, a 2008 graduate, back to campus. 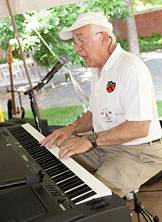 James Freund of the class of 1956 performs during the Battle of the Alumni Bands outside on the Frist South Lawn. 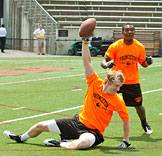 Alumni return to the gridiron for a game of touch football at Princeton Stadium.

Nancy Rickerson (left) and her daughter, Lucy, enjoy a visit to the Outdoor Action rock-climbing wall inside Princeton Stadium.

Princeton alumni, family members and friends have arrived on the Princeton campus for Reunions activities, which run through Sunday, May 29.

More than 20,000 attendees are expected to participate in Reunions events, which began Thursday, May 26.

Among the alumni returning on Thursday was Donald Carey, a member of Princeton's class of 1951, who joined with his wife, Barbara, to ride their bicycles to Reunions from New Hampshire. 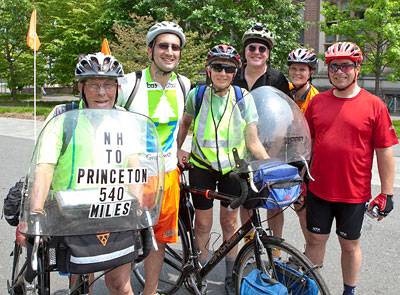 Some alumni, family members and friends biked to Reunions to demonstrate their commitment to environmental sustainability. From left are: Donald Carey, a member of the class of 1951; Dennis Markatos-Soriano, a 2008 graduate alumnus; Barbara Carey, wife of Donald; Stoney Emshwiller, who accompanied his wife, Margaret McGlynn, a member of the class of 1986; and Andrew Besold, the New Jersey events and outreach coordinator for the East Coast Greenway Alliance. (Photo by Denise Applewhite)

The couple -- he is 81, she is 82 -- climbed on their 17-year-old bikes on May 2 and departed Portsmouth, N.H., about 50 miles from their home in Gilford. They spent the next 24 days traveling through Massachusetts, Rhode Island, Connecticut and New York before arriving in Princeton on Thursday afternoon.

This is the fourth time the Careys have made the 540-mile trip by bike over the last 35 years -- they also came for Donald Carey's 25th, 30th and 50th reunions. This year they biked an average of six hours a day to join in his 60th reunion.

"It's a challenge," said Barbara Carey. Added her husband, "I haven't been on a bike in more than a year."

The Careys were part of a group of alumni who rode to campus in an effort to promote environmental sustainability, arriving in time for a "green tour" of campus hosted by the Office of Sustainability. 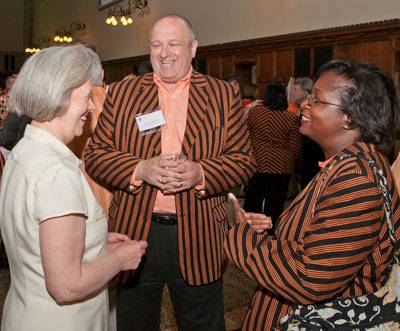 Other highlights of this year's Reunions include: 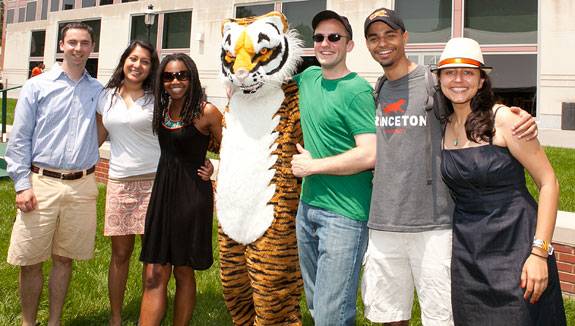 Members of the class of 2006 meet the Princeton tiger outside of the Frist Campus Center. (Photo by Denise Applewhite)

All alumni and University representatives again will be required to have wristbands to participate in Reunions activities in the major reunion headquarters courtyards. Wristbands are not required for attending lectures or performances or watching the P-rade, which are open to alumni, friends and the campus community. The concert and fireworks are open to the campus and local communities.

Faculty and staff members and their guests must pick up their wristbands in person in the parlor of Maclean House (enter at the front of the house) between 7 and 11 p.m. Friday and Saturday, May 27-28. A University ID card and valid driver's license with photo will be required for pickup. 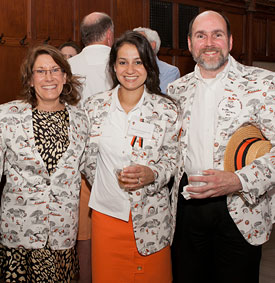 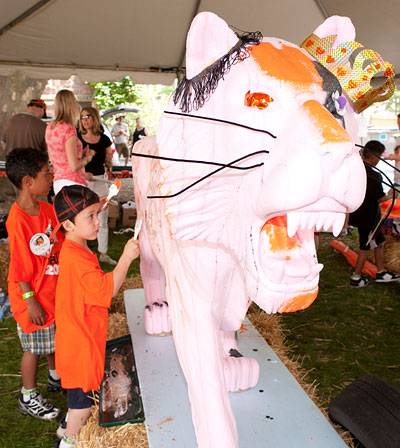 Children of alumni take their turn at painting an oversized tiger outside the Frist Campus Center. (Photo by Denise Applewhite) 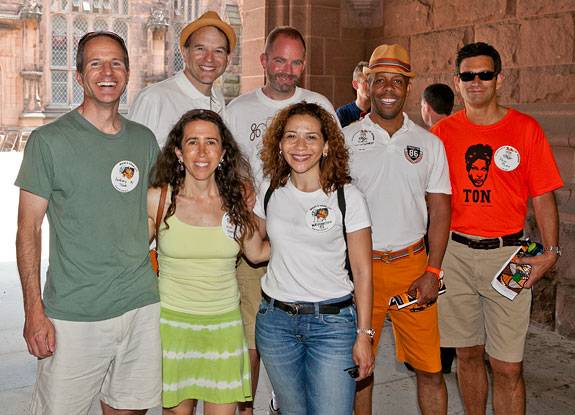 Members of classes from the late 1980s and early 1990s gather outside of East Pyne Hall en route to Reunions activities. (Photo by Denise Applewhite) 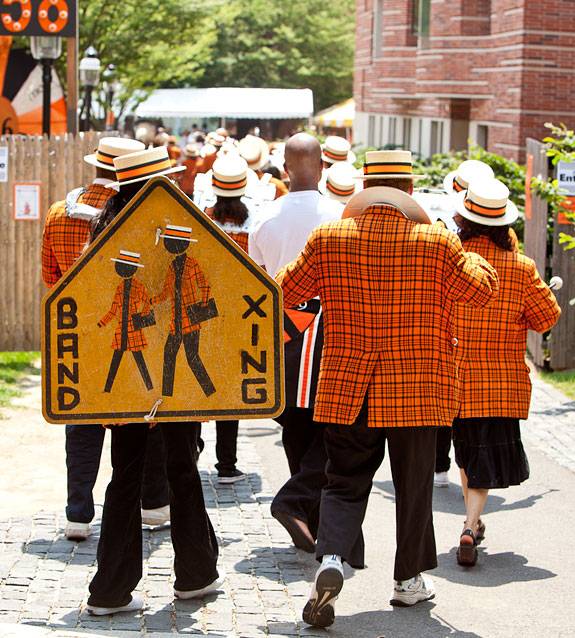 The Princeton University Band marches into the class of 1956 headquarters site near Scully Hall. (Photo by Brian Wilson)

Alumni of all ages return for Reunions

Reunions 2010 celebration is under way

Generations of alumni return for Reunions