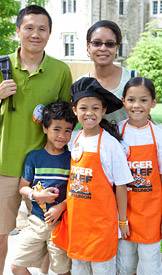 Some 20,000 Princeton University alumni, family and friends are expected on campus for Reunions 2012, which features performances by student groups, bands, alumni-faculty forums and the annual P-rade through campus. Among the attendees is Class of 1992 graduate Yuen Chau, his wife, Natasha, and children (from left to right) Aidan, Emilie and Anna, who dressed up in honor of the class' "Tiger Chef" theme.

Some 20,000 Princeton University alumni, family and friends began arriving on campus Thursday, May 31, to reconnect with classmates, enjoy performances by student groups, attend panel discussions and show off their most colorful orange and black fashions during Reunions 2012.

Carola Ibanez, a member of the Class of 2002, traveled from Spain with her husband, Sergio de la Calle, and young daughter, Isabel, to attend the celebration.

"I was here for my 5th Reunion, now I'm back for my 10th and we plan to be here for the 15th," Ibanez said. "This is my time to really cherish Princeton. Everything I didn't have a chance to do while I was a student here, I can do now." 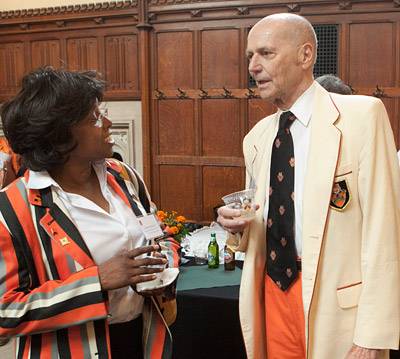 Also among this year's attendees was Colleen Holmes, a member of the Class of 1981, who said it was her first visit to campus since graduating. Her reason for returning: the inaugural reunion of the eXpressions Dance Company, which she founded as an undergraduate. Holmes quickly fell back into place as she joined current and former eXpressions dancers at a workout session in the Wilson College Dance Studio on Thursday.

By Friday afternoon, the University was abounding with alumni laughing, snapping photos together and enjoying events across campus. As part of its 25th Reunion, the Class of 1987 sponsored a large outdoor yoga class on Poe Field. People young and old spread orange mats across the grass, stretching, bending and twisting their bodies.

Actress and author Brooke Shields (second from left), a member of the Class of 1987, speaks at the alumni-faculty forum "Tigers in the Arts." She was joined on the panel by (from left to right) 1997 alumnus Davis McCallum, 1982 alumna Molly Hickok, 1977 alumnus Robert Taub, 1972 alumnus Christopher Janney and Michael Cadden, acting chair of the Lewis Center for the Arts.

Earlier in the day, actress and author Brooke Shields, of the Class of 1987, reflected on her undergraduate days during the discussion "Tigers in the Arts," which was one of the many alumni-faculty forums scheduled throughout the weekend.

"I came in already being an artist, but I was never able to fully own being an artist until I spent my four years here as a French literature major," Shields said, referring to her experience as a child actress before attending Princeton.

This year's event marks the 100th anniversary of class jackets, which are featured in an exhibit in the Frist Campus Center. The traditional jackets, designed by seniors when they graduate and worn by alumni during Reunions, began with denim jackets sported by some seniors from the Class of 1912. 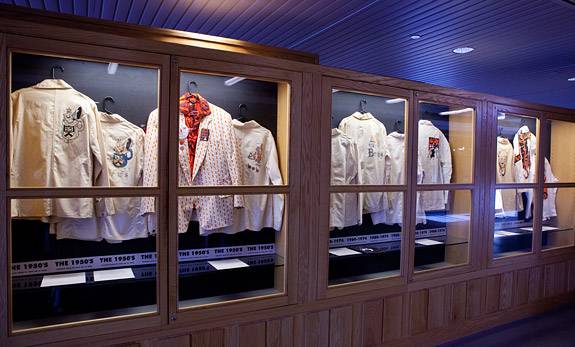 An exhibit in Frist Campus Center marks the 100th anniversary of class jackets, which are worn by alumni during Reunions.

Other highlights of Reunions 2012, which runs through Sunday, June 3, include: the annual P-rade throughout campus beginning at 2 p.m. Saturday; department open houses during the day Friday and Saturday; theatrical and musical shows by the Princeton University Players, Theatre Intime, Triangle Club and other student organizations throughout the weekend; and evening receptions and student/alumni arch sings Friday and Saturday.

The festivities will light up the sky on Saturday with the annual fireworks scheduled for 9:15 p.m. on Finney and Campbell fields. A lawn concert by the University Orchestra will precede the display at 8 p.m. In the event of inclement weather, Reunions attendees may call 609-258-8100 for a fireworks update. 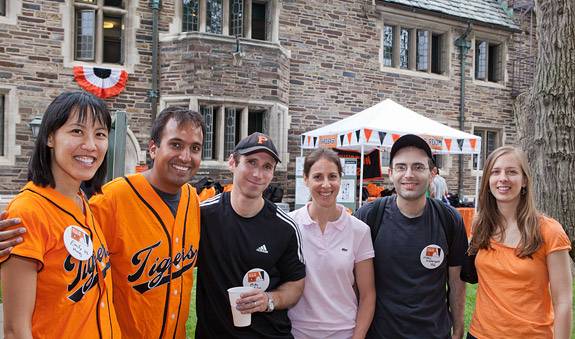 (From left to right) Emily Hung, Neil Vachharajani, Mike Cohen and his wife Joy Cohen, Marc Schreiber and Nellie Bronner reconnect at the Class of 2002 Reunion.

All alumni and University representatives again will be required to have wristbands for entry to all Reunions headquarters sites for evening entertainment as well as alcoholic and non-alcoholic beverages. Wristbands are not required for attending lectures or performances, watching the P-rade, or attending the concert and fireworks, all of which are open to alumni, friends and the campus community.

Faculty and staff members may register for a wristband for themselves and one additional guest. The wristbands are not transferable, and applicants and guests must be 21 or older. The cost for a wristband is $40 per person. Online registration for wristbands closed earlier this week, though individuals may still register in person in the Frist Campus Center, Room 309, from 5 to 10 p.m. Friday and Saturday, with payment accepted in cash or check only. A University ID, plus a valid driver's license with photo or valid passport, is required for pickup. 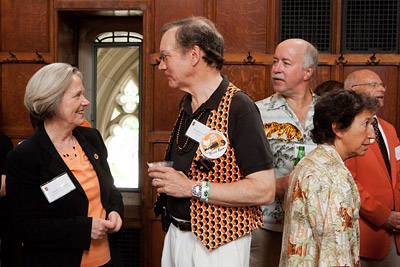 President Shirley M. Tilghman talks with Dick Bott, a member of the Class of 1969, at a reception preceding the Alumni Council Annual Reunions Luncheon. 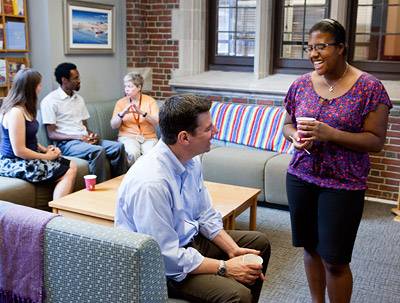 Dave Brown, director of the Student Volunteers Council, talks with Shayla Reid, a member of the Class of 2015, at the Lesbian, Gay, Bisexual, Transgender Center (LGBT) Open House, where the University community is invited to visit the LGBT Center in Frist Campus Center during Reunions. 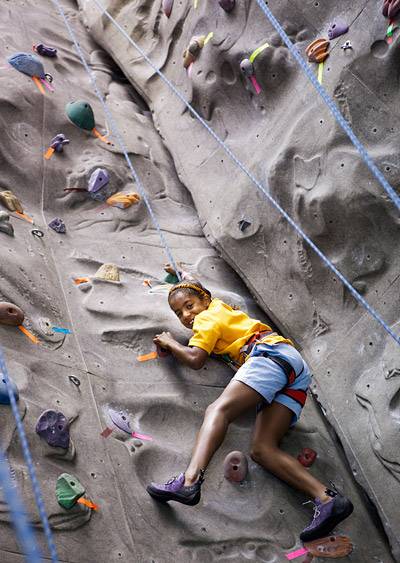 Ten-year-old Zoe Crute scales the Outdoor Action indoor rock climbing wall. It was one of many activities for children attending Reunions with their parents. 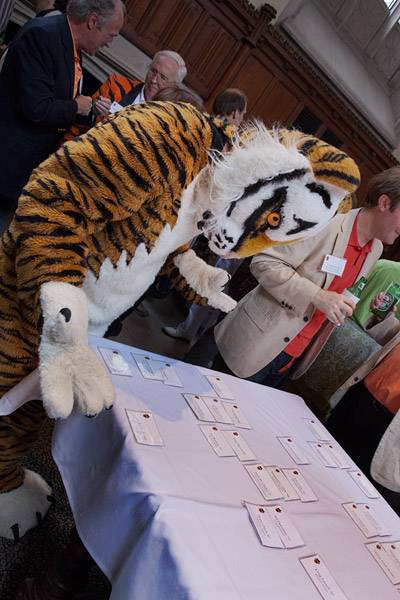 The Princeton Tiger mascot searches for a name tag at an alumni reception during Reunions 2012. 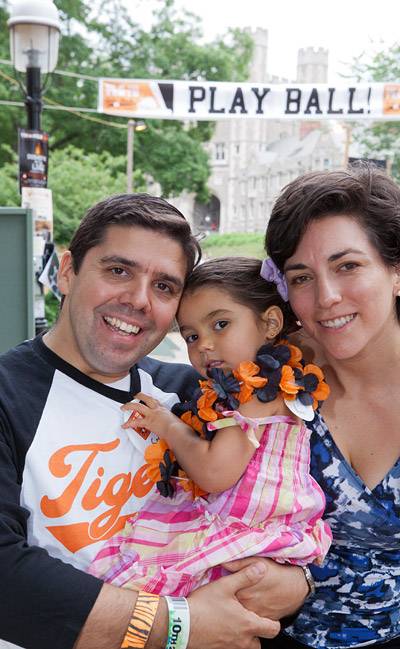 Carola Ibanez, a member of the Class of 2002, traveled from Spain with her husband, Sergio de la Calle, and young daughter, Isabel, to attend Reunions. 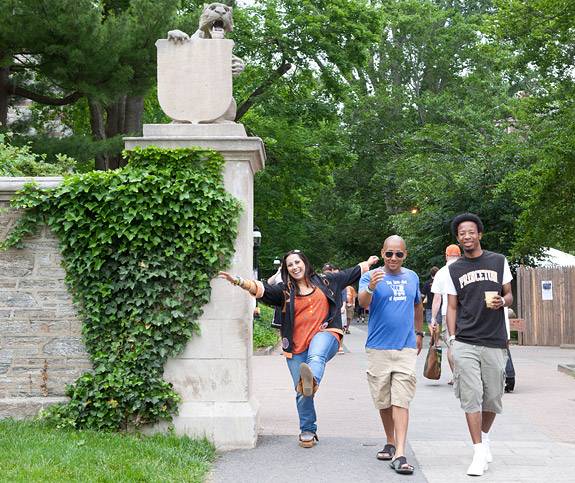 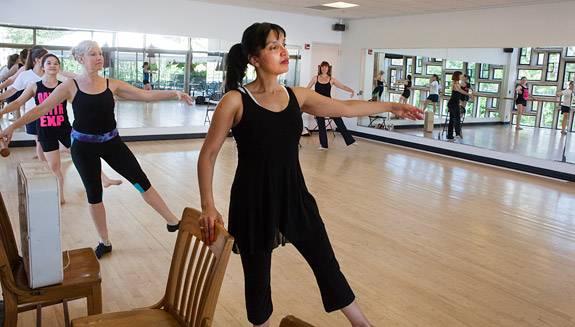 Colleen Holmes, of the Class of 1981, practices with current and former members of the eXpressions Dance Company. Holmes said she returned to campus for the first time since graduating to reunite with the student dance group she founded as an undergraduate. 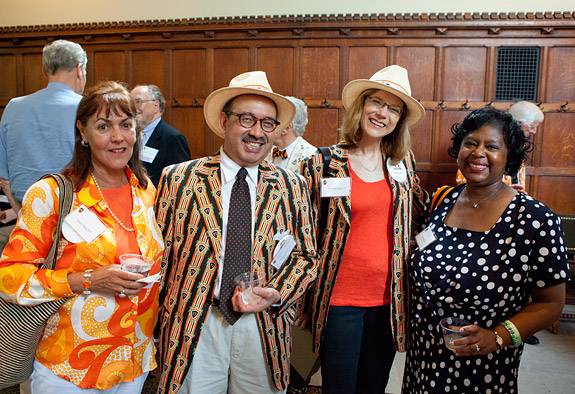 Class of 1977 alumnus Jose Pincay-Delgado (second from left) and his wife, Lucy Puig (far left), reconnect with friends from the Class of 1977, Beth Rose (second from right) and Jamie Reed (far right). 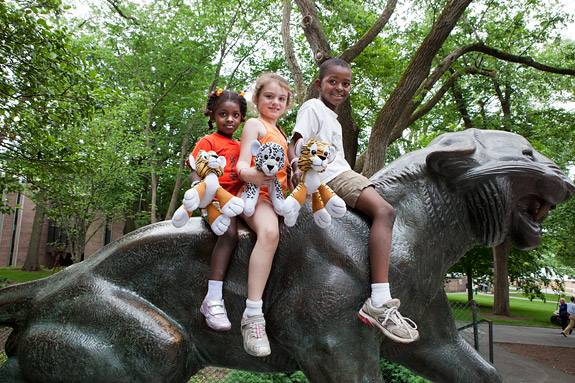 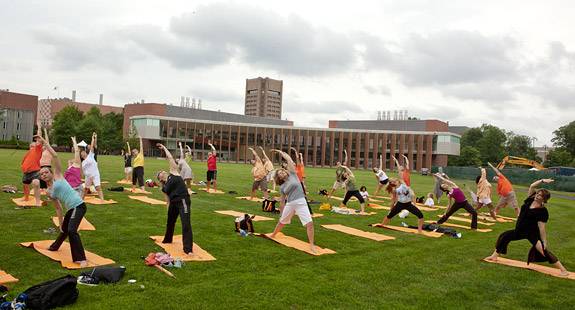 As part of its 25th Reunion, the Class of 1987 sponsored a large outdoor yoga class on Poe Field, where participants of all ages did poses on orange mats spread out across the grass.