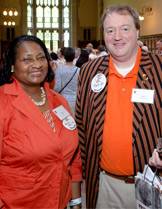 Class of 1984 graduates Valerie Kelly (left) and Rhett Dunaway are among the nearly 25,000 Princeton University alumni, family and friends expected on campus for Reunions 2014. The event began Thursday, May 29, and will run through Sunday, June 1.

Class of 1984 graduates Valerie Kelly (left) and Rhett Dunaway are among the nearly 25,000 Princeton University alumni, family and friends expected on campus for Reunions 2014. The event began Thursday, May 29, and will run through Sunday, June 1.

From bandanas, pants, class jackets, socks and shoes, Princeton alumni show off their orange and black colors in countless ways.

From bandanas, pants, class jackets, socks and shoes, Princeton alumni show off their orange and black colors in countless ways.

Nearly 25,000 Princeton University alumni, family and friends converged on campus Friday, May 30, for Reunions 2014 to catch up with classmates, attend panel discussions with faculty and alumni, and celebrate Princeton traditions. The event began Thursday, May 29, and will end Sunday, June 1.

Alumni traveling from across the world reconnected as they walked around the sunny campus Friday. Class of 2013 graduates Siofra Robinson, Chloe Ferguson and Mohit Manohar traveled from France, China and India, respectively, to attend their first Reunions as alumni.

"Even though my time as an undergraduate is over, it's nice to know I'll always have Reunions as a reason to be at Princeton," Robinson said.

"This is the longest time I've gone without seeing Princeton people," said Chism, who flew in from Los Angeles. "I can't wait." 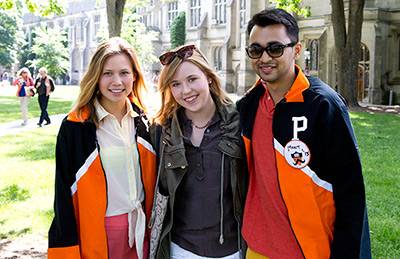 On Thursday afternoon, President Christopher L. Eisgruber helped kick off the event at the Class of 1959 Reunion Seminar, where he spoke about the value of a liberal arts education. His remarks were followed by comments from H. Vincent Poor, dean of the School of Engineering and Applied Science, and Keith Wailoo, vice dean of the Woodrow Wilson School of Public and International Affairs.

"We are engaged in higher education and at Princeton in a long-term enterprise," Eisgruber said. "We are investing in our students with the idea that in 20, 25 or 30 years after their graduation they are going to make a difference in the world in a way that justifies the extraordinary investment that this university makes in them. And they are going to make that difference in ways that we can't possibly predict right now."

Before the seminar began, Class of 1979 graduate Mimi Chen couldn't resist snapping a photo of herself with her phone as she sat among the rows of wooden desks in McCosh Hall, Room 50.

"I never could have taken a 'selfie' in class before, so figured I'd do it now," Chen said with a smile. "It's fun to feel like a student again."

"Princeton Alumni in the Service of All Nations" was one of the many alumni-faculty forums taking place during Reunions. From left to right: João Biehl, the Susan Dod Professor of Anthropology and co-director of Princeton's Program in Global Health and Health Policy; George Hritz, a Class of 1969 graduate and counsel at Kaplan, Fox and Kilsheimer; Christine Brady, a Class of 1979 graduate and president of The Americas Foundation; University Trustee Jaime Ayala, a Class of 1984 graduate and chief executive officer and founder of Hybrid Social Solutions; and Philip Zabriskie, a Class of 1994 graduate and managing editor of publications and web for Doctors Without Borders.

At the alumni-faculty forum "Princeton Alumni in the Service of All Nations" on Friday morning, panelists spoke of how their continued connections to alumni and current students have benefited their work with humanitarian aid and other service organizations. University Trustee Jaime Ayala, chief executive officer and founder of Hybrid Social Solutions, said Princeton students often serve as summer interns with his organization to help provide solar energy to rural communities in the Philippines.

"It's fantastic the number of students today going out and spending time on the ground," said Ayala, a Class of 1984 graduate. "If you want to help people, you really have to get out there and see it for yourself." 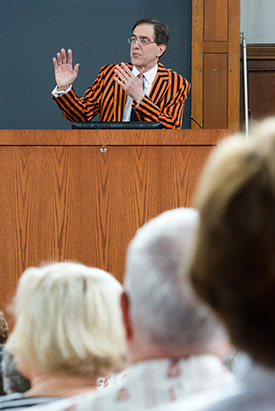 President Christopher L. Eisgruber helped kick off Reunions on Thursday afternoon at the Class of 1959 Reunion Seminar, where he spoke about the value of a liberal arts education.

Outside the New South building, alumni were engaged in hands-on service work packaging meals for the Kids Against Hunger Coalition. The community project was organized by the Class of 1989 in collaboration with the classes of 1979, 1999 and 2004.

"I think it's extremely important to find a way to give back as part of Reunions," said Class of 1989 Reunions co-chair Christie Coates.

Event organizer and Class of 1989 graduate Bernard Hooper added: "Princeton in the nation's service is being realized right here. We are very proud of this effort."

Across campus at the Friend Center, current students and alumni gathered for the PrincetonEN Business Plan Competition. Entrepreneurs showcased their startup businesses and projects, and networked with fellow entrepreneurs and investors.

"It's great to host an event like this at Reunions because a lot of alumni entrepreneurs are already on campus. I get to see my friends and pitch my idea," said Andrew Ng, a member of the Class of 2016. Ng is co-founder of Chess Academy, a personalized, online curriculum for learning chess.

The fun and festivities will continue throughout the weekend. Highlights will include: 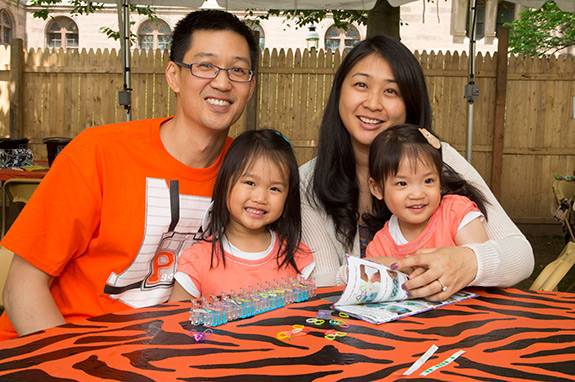 Class of 1994 graduate Nicholas Lee traveled from Seattle with his wife, Joanne, and daughters Jillian and Audrey to attend his 20th Reunion.

All alumni and University representatives are required to have wristbands for entry to all Reunions headquarters sites for evening entertainment as well as for alcoholic and non-alcoholic beverages. Wristbands are not required for alumni attending lectures or performances, watching the P-rade, or attending the concert and fireworks.

Faculty and staff members may register for a wristband for themselves and one additional guest. The wristbands are not transferable, and applicants and guests must be 21 or older. Online registration for wristbands closed earlier this week, though individuals may purchase wristbands for $60 each in East Pyne, Room 111, through Saturday. 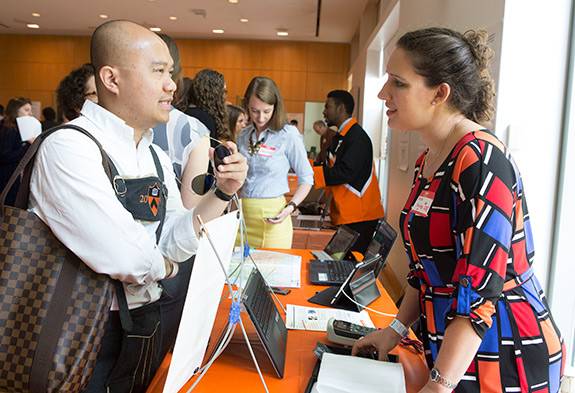 Binh Dang (left), a Class of 2009 graduate, talks with Katie Hughes, a Class of 2008 graduate alumna, at the PrincetonEN Business Plan Competition in the Friend Center. The event brought together student and alumni entrepreneurs. 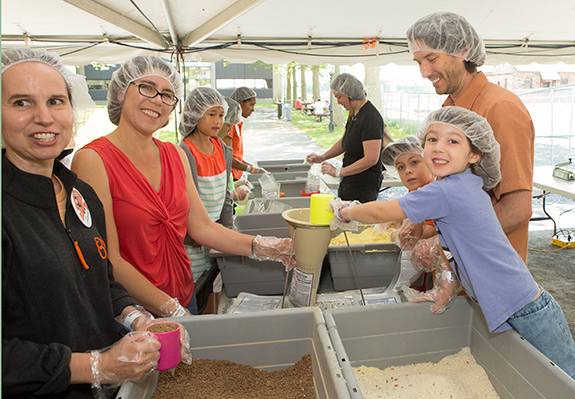 Class of 1989 alumni and their families help package meals for the Kids Against Hunger Coalition as part of a Reunions community service project. 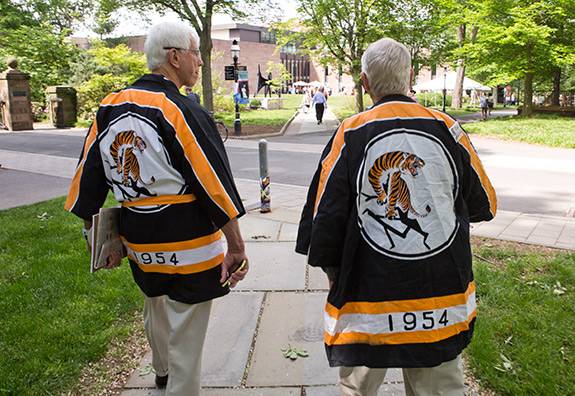 Class of 1954 alumni Richard Schulze (left) and Eric Wohlforth stroll through campus in their class jackets on Friday, May 30.

Alumni will return to campus for Reunions 2014