Seven-year-old Timothy Warneck balances on a tightrope during Princeton University Reunions on Friday, May 31. Circus games were one of the many activities that Princeton alumni and their families could enjoy during the annual celebration on campus. More than 24,000 people were expected to attend the event.

Seven-year-old Timothy Warneck balances on a tightrope during Princeton University Reunions on Friday, May 31. Circus games were one of the many activities that Princeton alumni and their families could enjoy during the annual celebration on campus. More than 24,000 people were expected to attend the event.

Elizabeth Patterson, a graduate of the Class of 1994, considers Princeton University Reunions both a college and family reunion. Her husband, father, brother and sister — all Princeton alumni — are together on campus this weekend to celebrate Reunions 2013.

"Everyone seems to enjoy coming back and seeing how the campus has changed," said Patterson, who traveled from Houston with her husband, Adrian Clarke of the Class of 1994, and young children Marshall and Maribel.

Patterson was among the more than 24,000 Princeton alumni, family and friends expected to reconnect with classmates, enjoy performances by student musical and theater groups, attend alumni-faculty discussions, and participate in community service projects from Thursday, May 30, through Sunday, June 2. 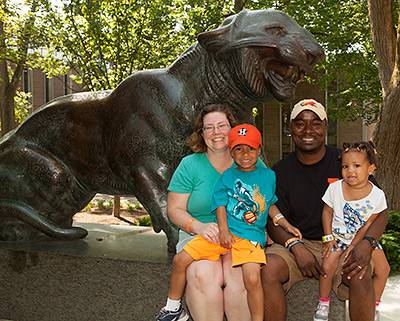 (From left to right) Elizabeth Patterson of the Class of 1994 traveled from Houston to Princeton with her son Marshall, husband Adrian Clarke, also of the Class of 1994, and daughter Maribel. Patterson's father, sister and brother also are on campus for the annual alumni gathering. (Photo by Denise Applewhite)

Across campus Friday, alumni and their families were playing games, enjoying food and showing off vibrant orange and black attire.

At the 20th Reunion headquarter site, the Class of 1993 set up a "93 Ring Circus" where children juggled balls and walked a tightrope.

"Being typical Princeton alumni, we don't do punch and cookies. We have to do something different," joked Class of 1993 graduate Maria McElroy, who helped organize the activities. "The idea is for parents and children to have fun together."

For a different kind of fun, W. Barksdale Maynard, Class of 1988, led alumni on a tour of campus titled "Princeton, America's Campus: Explore 260+ Years of Architecture."

"How do you improve on the campus? It's almost a hopeless task," Maynard said, remarking on the architectural beauty of the University's historic buildings as the group gathered near 1879 Hall archway. 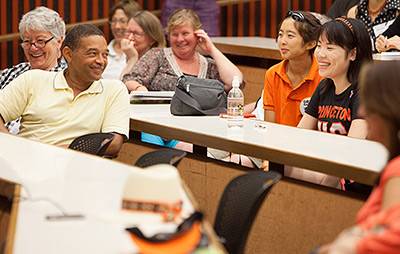 At a reception in Rockefeller College, President Shirley M. Tilghman and Provost and President-elect Christopher L. Eisgruber talked with alumni volunteers. Among the crowd were Donnica Moore of the Class of 1981 and Dwight McKay of the Class of 1984, organizers of Parent-Net, an online discussion group about parenthood for Princeton alumni. Although Moore enlisted McKay nearly 16 years ago to provide technical support for the virtual network, the two had never met in person.

"It's amazing that until today Dwight's and my connection had only been online and through email," said Moore, who also is a parent of a Princeton sophomore. "Through Parent-Net, we have built an extremely close virtual community that spans Princeton alumni across the globe. It really has broken class lines, racial lines, socioeconomic lines." 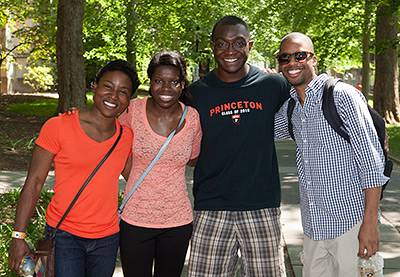 Throughout the day, alumni attended alumni-faculty forums on a range of topics. Eisgruber, a Class of 1983 graduate, moderated the panel "Is the Judicial Confirmation Process Broken?" Christopher Schroeder, Class of 1968 and the Charles S. Murphy Professor of Law and Public Policy at Duke University School of Law, joked that the caliber of judges remains high as demonstrated by the three Princeton alumni serving on the U.S. Supreme Court.

In the forum "Books That Changed Your Life," Jeff Gordinier, staff writer for The New York Times and Class of 1988 graduate, recalled the wonder of taking undergraduate classes with authors John McPhee, the Ferris Professor of Journalism, and Joyce Carol Oates, the Roger S. Berlind '52 Professor of the Humanities and professor of creative writing. 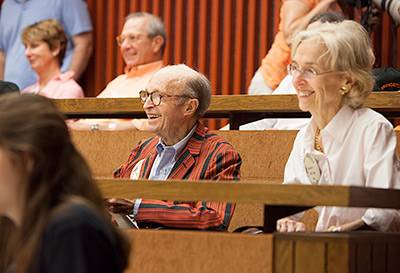 Attendees listen to alumni authors and writers speak during a panel discussion on "Books that Changed Your Life." (Photo by Denise Applewhite)

Alumni also participated in community service projects while attending Reunions. Members of the Class of 1993 and seniors from the Class of 2013 painted a mural that will be installed at the Family Resource Center (El Centro) in Trenton, N.J. Junior Amanda Santillo designed the canvas mural featuring colorful animals.

"I wanted it to be a kid-friendly mural that captured a sense of collaboration and friendship," Santillo said. 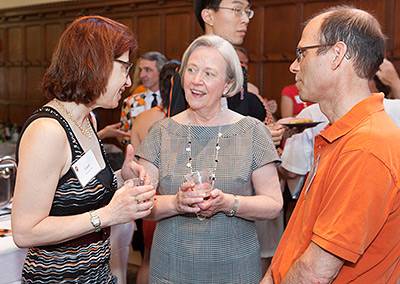 Other highlights of Reunions 2013 include:

All alumni and University representatives are required to have wristbands for entry to all Reunions headquarters sites for evening entertainment as well as for alcoholic and non-alcoholic beverages. Wristbands are not required for alumni attending lectures or performances, watching the P-rade, or attending the concert and fireworks.

Faculty and staff members may register for a wristband for themselves and one additional guest. The wristbands are not transferable, and applicants and guests must be 21 or older. Online registration for wristbands closed earlier this week, though individuals may purchase wristbands for $40 each at East Pyne, Room 111, through Saturday. More information about Reunions wristbands is available on the Alumni Association website. 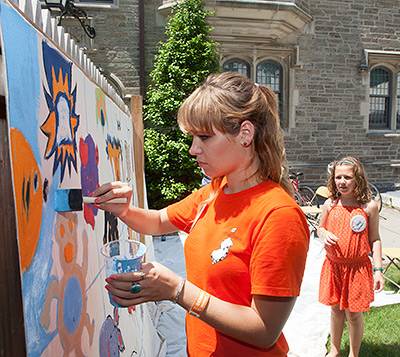 (Left to right) Junior Amanda Santillo and Daisy Freeman paint a mural that will be installed at the Family Resource Center (El Centro) in Trenton, N.J., as part of a Reunions community service project sponsored by the Classes of 1993 and 2013. (Photo by Denise Applewhite) 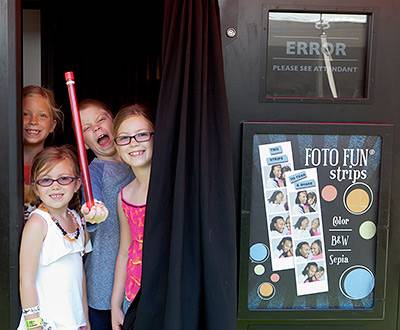 (From left to right) Anya Potsiadlo, Abby Bojko, Tyler Potsiadlo and Sophia Bojko have fun in the photo booth at the 20th Reunion headquarter site. (Photo by Denise Applewhite) 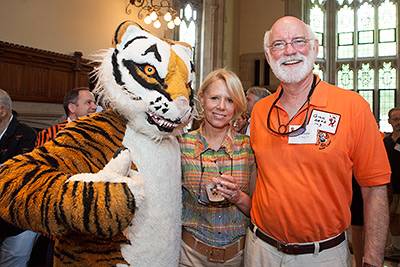 The Princeton Tiger celebrates with Amy Berg and Gilchrist Berg, Class of 1973. (Photo by Denise Applewhite) 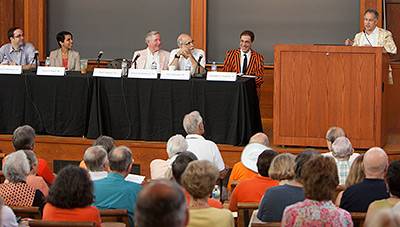 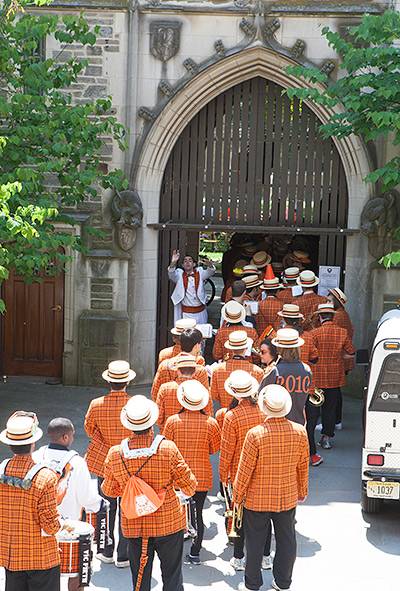 The Classes of 1978 and 2013 performed together Thursday night in a talent show "Seniors and Senior Citizens United!" (Top left) The co-ed modern dance troupe BodyHype; (bottom left) The Generation Tap performed "Turn It Off" from the Broadway musical "The Book of Mormon"; (right) Princeton's hip-hop dance troupe Sympoh. (Photos by Danielle Alio)