They came from as far away as Thailand, India, Greece, New Zealand and Serbia — to don their beloved class jackets (and anything else orange and black), reunite with friends and enjoy the festivities. Approximately 26,000 Princeton alumni and guests are on campus for Reunions 2017, which runs Thursday through Sunday, June 1-4.

This year, returning classes range from the "Old Guard" — Joe Schein, a 1937 alumnus, who will travel from his home in New York City to participate in the P-rade on Saturday, and Norm Carter, a 1938 alumnus who comes every year from Point Pleasant, New Jersey — to the "youngest" alumni, the Class of 2016.

About a month ago, Hanenberger mentioned to her husband, Frank, who owns two Subaru dealerships, that it would be fun to drive to Reunions in an orange Subaru Crosstrek. "Last Friday, I drove home from work and found this TigerMobile parked in our driveway," she said. "I had no idea that he would take it to the next level and have the black tiger stripes added!"

She noted that this Reunion, her 25th, is especially poignant because her father, Keith Brodie, and uncle, Robert Barrowclough, members of the Class of 1961, both died in the last six months. "Our Princeton education was something we all cherished and a bond that we shared," she said. "I will march in the P-rade in their honor and pay a special tribute to the Class of 1961." 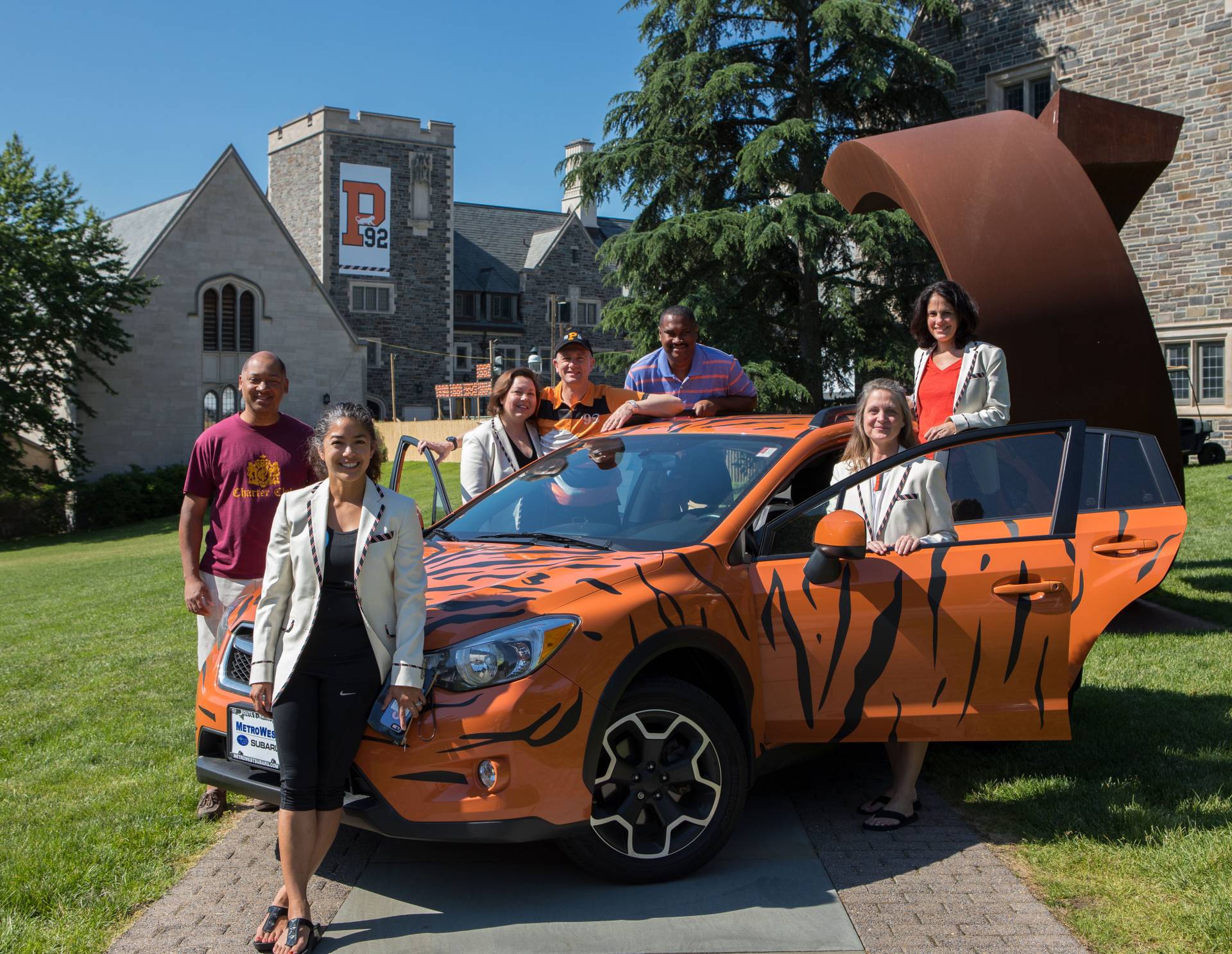 Jim Newcomer, a member of the Class of 1957, and his wife took a red-eye flight Wednesday night from Portland, Oregon, for his 60th reunion. He said he looks forward to "talking with classmates about their lives and mine. These are the people, mind you, with whom I measure my life, the people who were there when some terribly important parts of my life occurred." He last came to campus for his 50th Reunion and tries to make it every 10 years. "Reunions is like a weekend date with 200 people you're in love with," he said.

Newcomer, who serves on the Alumni Schools Committee in Portland, said, as a white male, he is full of admiration for the way the University has reached out to diverse populations since his time as a student. Newcomer said: "Sixty years ago the world and Princeton were very different from now. It needed to change. ... When the Civil Rights movement burst out, the avenues to connect with students of color opened up and the urgency to reach out grew. I cried a little with pride at our 50th Reunion as we marched through the younger classes and the graduates cheering for us grew more diversified in gender as well as in race and ability. These are the kind of people I want around me." 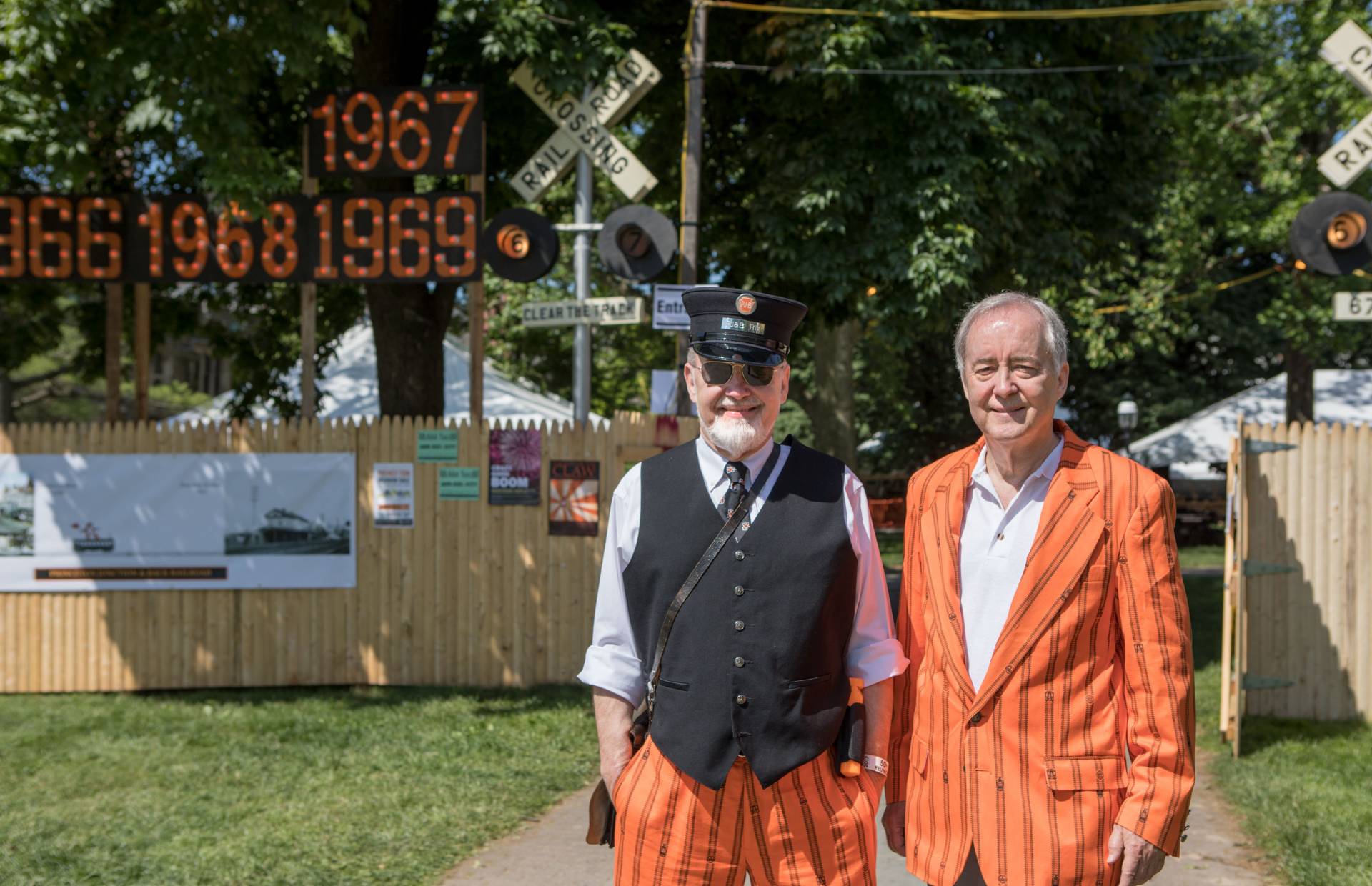 Back on track: Tim Tulenko, left, and his brother Tom Tulenko, members of the Class of 1967, on campus for their 50th Reunion, are in charge of designing and organizing the railroad-themed clothing, headquarters signage and P-rade float (a railroad car, naturally) for their class's major reunions.

Tora Harris, a 2002 alumnus, flew in Wednesday night from China, where he was visiting the factory for his San Diego-based electric bicycle company, JuicedBikes. Harris and classmate Juan Venturi, both mechanical and aeronautical engineering majors, reminisced about the start of the business while Venturi's children enjoyed the eXpressions dance company's hip-hop workshop at the Lewis Center for the Arts.

Harris, who competed in the high jump at Princeton, said he hatched the idea for electric bikes while training in Germany and the Netherlands for the 2004 Olympics. Noticing how so many people rode bikes, he recalled the electric golf cart Venturi had used to drive him to and from class at Princeton while Harris was recovering from a foot injury. "I connected the electric cart and the bikes and started messing around with electric vehicles," Harris said. "Now, we distribute all over the world." He said Venturi, an early investor in and adviser for JuicedBikes, "also gives me feedback the same way we did in school as we worked on senior projects together."

For identical twins Tom and Tim Tulenko, members of the Class of 1967, Reunions means All Things Railroad, inspired by the "Dinky" train from Princeton to Princeton Junction, the shortest passenger train route in the United States. 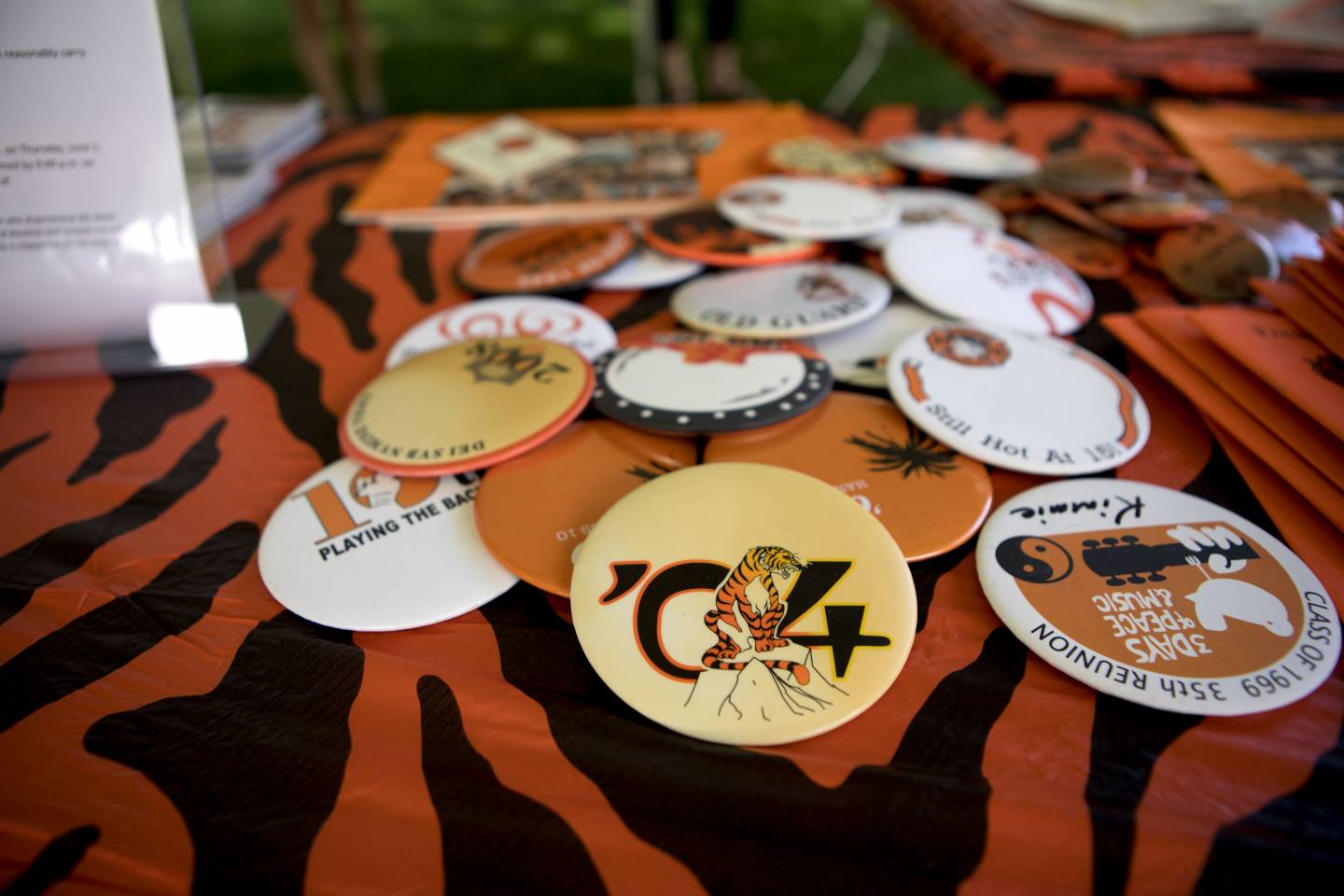 Something old, something new: Class buttons from decades past wait for a new home at the Princetoniana "Take It or Leave It" table, where alumni can drop off unwanted Princeton memorabilia and discover new treasures.

As costume chair for his class, Tim designs and produces the costume for major Reunions — dressing the class as old-time passengers on a railroad-themed float in the P-rade. This year he hopes to help their 50th "achieve a level of whimsical facetiousness in keeping with the finest traditions of Reunion rah-rah." That includes a train-themed "timetable" flyer touting events such as the "Chattanooga Chew-Chew" lunch buffet and the "Bar Car" reception at the Princeton University Art Museum.

As the Class of 1967 marshal for the P-rade, one of Tom's tasks is "leading the cheers and begging classmates to stop ambling so much on the march," he said. Every five years he pulls out two life-size blinking railroad crossing signs to flank the entry gate to the class tent. On Friday afternoon in McCosh Hall, he gave a public talk "PJ&B — Before the 'Dinky': The Princeton Junction & Back Railroad, 1865 to 1967."

Reunions weekend features the talents of a variety of student groups including Princeton Shakespeare Company's production of "The Tempest" in East Pyne courtyard, Princeton University Ballet's Reunions show at Frist Campus Center's Film and Performance Theater, and Quipfire! Improv Comedy at Hamilton Murray Theater. On Friday afternoon, members and alumni of the Princeton University Glee Club filled the stage and balcony at Richardson Auditorium with the hauntingly beautiful "Spem in Alium," a Renaissance motet for eight choirs.

Before participating in the Glee Club event, Amy Beth Treciokas, a 1987 alumnus, pulled out her orange-and-black tiger tights — a gift from her classmate and former roommate Susan Cummings — and headed to Poe Field to lead an outdoor yoga class. Five years ago, for her 25th Reunion, Treciokas — the founder of Yoga Now in Chicago, where she is executive vice president of the Princeton Club of Chicago — held a similar class and it proved so popular she held it again this year.

She has attended the five-year Reunions regularly over the years. "I look forward most to seeing old friends and reconnecting with other classmates," said Treciokas, who often gets together in Chicago with another alumna and yoga studio owner, Dani Petrie, a member of the Class of 1990.

A panel on "Reflections on Class and Race" in Maeder Hall Auditorium in the new Andlinger Center for Energy and the Environment featured Charlie Shorter, Class of 1962, senior adviser, Davis Brody Bond; Sharon Fairley, Class of 1982, chief administrator, City of Chicago, Independent Police Review Authority; and Joseph Barnett, Class of 2012, distribution analyst, Universal Pictures and a graduate student at the University of California-Irvine. Eddie Glaude Jr., a 1997 graduate alumnus and the William S. Tod Professor of Religion and African American Studies, moderated.

While introducing the panelists, Glaude referred to a May 30 column in The New York Times that gave examples of the changing socioeconomic diversity of Princeton's student body. Glaude said the column noted that 21 percent of Princeton's Class of 2020 and the incoming Class of 2021 are Pell Grant-eligible, as compared with only 6.5 percent of the Class of 2007.

Barnett, a first-generation student who grew up in a rural community in a single-parent household, came to Princeton via QuestBridge, an organization that connects high-achieving, low-income students with top universities. "Princeton is doing a wonderful job of gaining access for these students," he said.

Shorter, one of three African American students in his class, came to Princeton before the civil rights movement. He said his path to the University was paved by a group of undergraduates who were concerned by the lack of diversity and got permission from the Office of Admission to visit area public high schools. While in Philadelphia, they met Shorter's father, then head of the Philadelphia branch of the NAACP.

"In terms of an education, it doesn't get any better than Princeton," Shorter said. "It made me feel really good to read in that New York Times piece that [President] Eisgruber says he wakes up in the morning expecting to make changes in diversity. He and the University have really worked on it. Because of that, there's no reason why Princeton can't serve as a model for the nation in how you make the intersection between race and class." 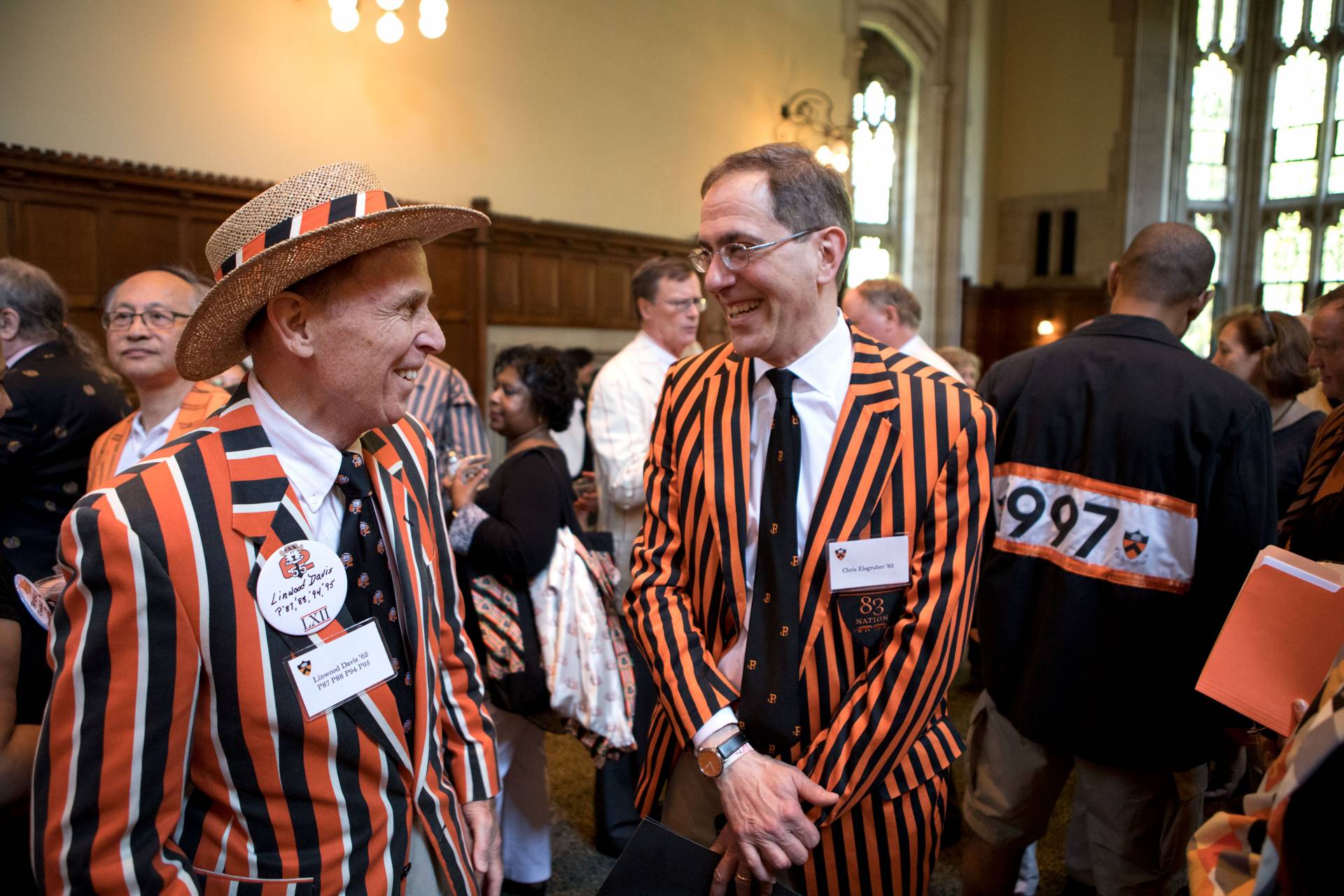 Tiger stripes optional: Linwood Davis, a member of the Class of 1962 (and father of four Princeton alumni from the classes of 1987, 1988, 1994 and 1995), left, and President Christopher L. Eisgruber, a 1983 alumnus, enjoy a lighthearted moment at the annual reception for alumni volunteers in Rockefeller Common Room.

Behind the scenes: Preparing for Reunions and service projects

While wrapped up in the whirlwind of Reunions activities, alumni may not even know about all the work that goes on behind the scenes to prepare for the festive weekend.

Facilities has also learned a thing or two about trash over the decades. A large clean-up crew always follow the last P-raders in order to clean up while the parade is still winding its way down Elm Drive. Last year, the clean-up was so fast — literally minutes behind the parade — only decades' worth of tradition (and plenty of selfies) confirmed the P-rade actually happened! And thanks to the Sustainability EcoReps — a group of students who work with the Office of Sustainability — 70+ bags of P-rade waste gets recycled.

Another "behind the scenes" element of Reunions are the service projects alumni engage in. Reflecting the University's informal motto "Princeton in the nation's service and the service of humanity," some of the events and initiatives this year include: 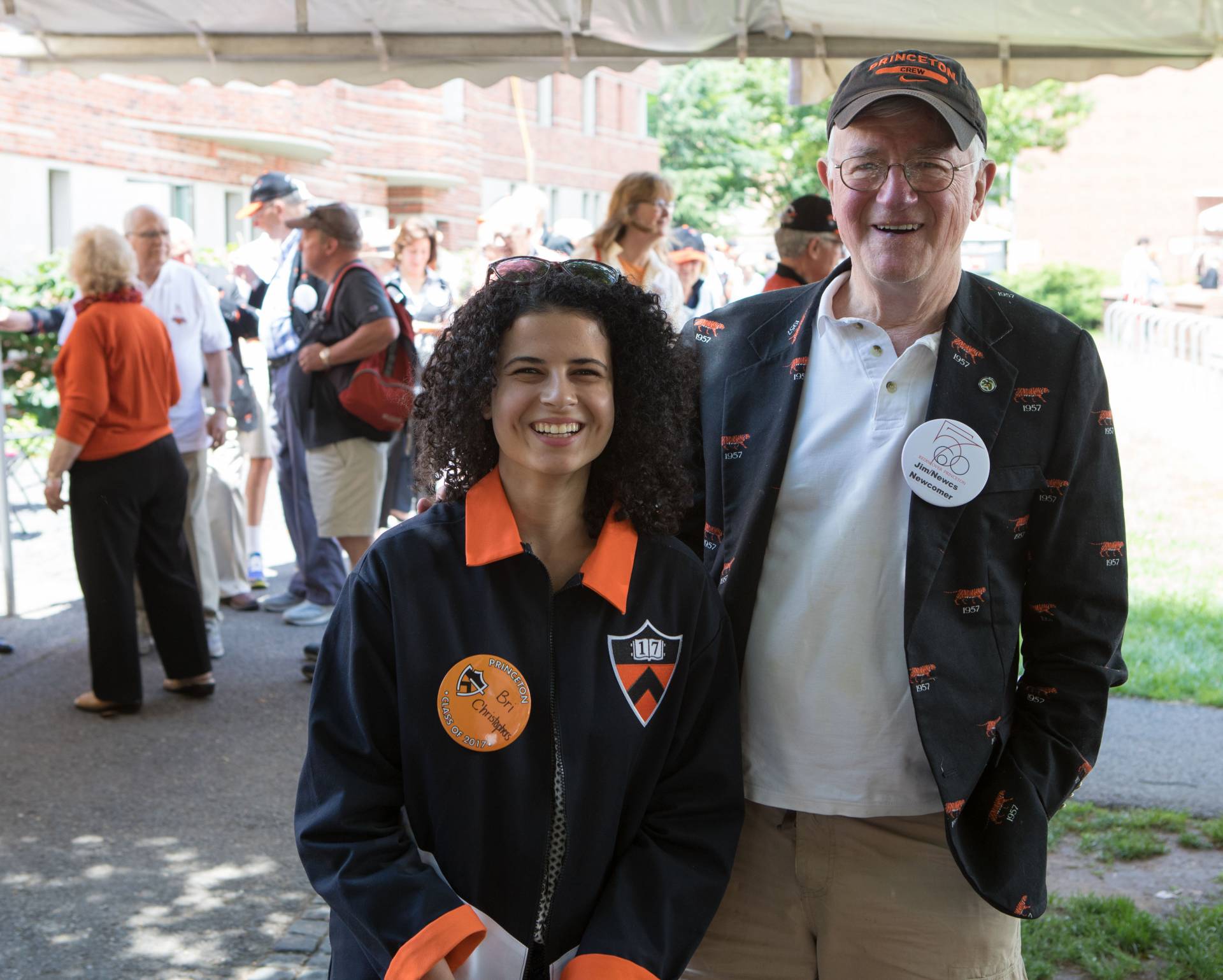 Across the decades: Briana Christophers, a member of the Class of 2017, left, pictured with Jim Newcomer, a 1957 alumnus, gets a taste of Reunions to come at the lunch line at the 60th Reunions tent.

Reunions festivities will continue through the weekend. Highlights include:

Alumni, guests, faculty and staff are required to have wristbands for entry to all Reunions headquarters sites for evening entertainment as well as alcoholic and non-alcoholic beverages. Wristbands are not required for attending lectures or performances, watching the P-rade, or attending the concert and fireworks.

Alumni may visit the Reunions 2017 website for information about wristband policy and wristband pickup locations and hours. 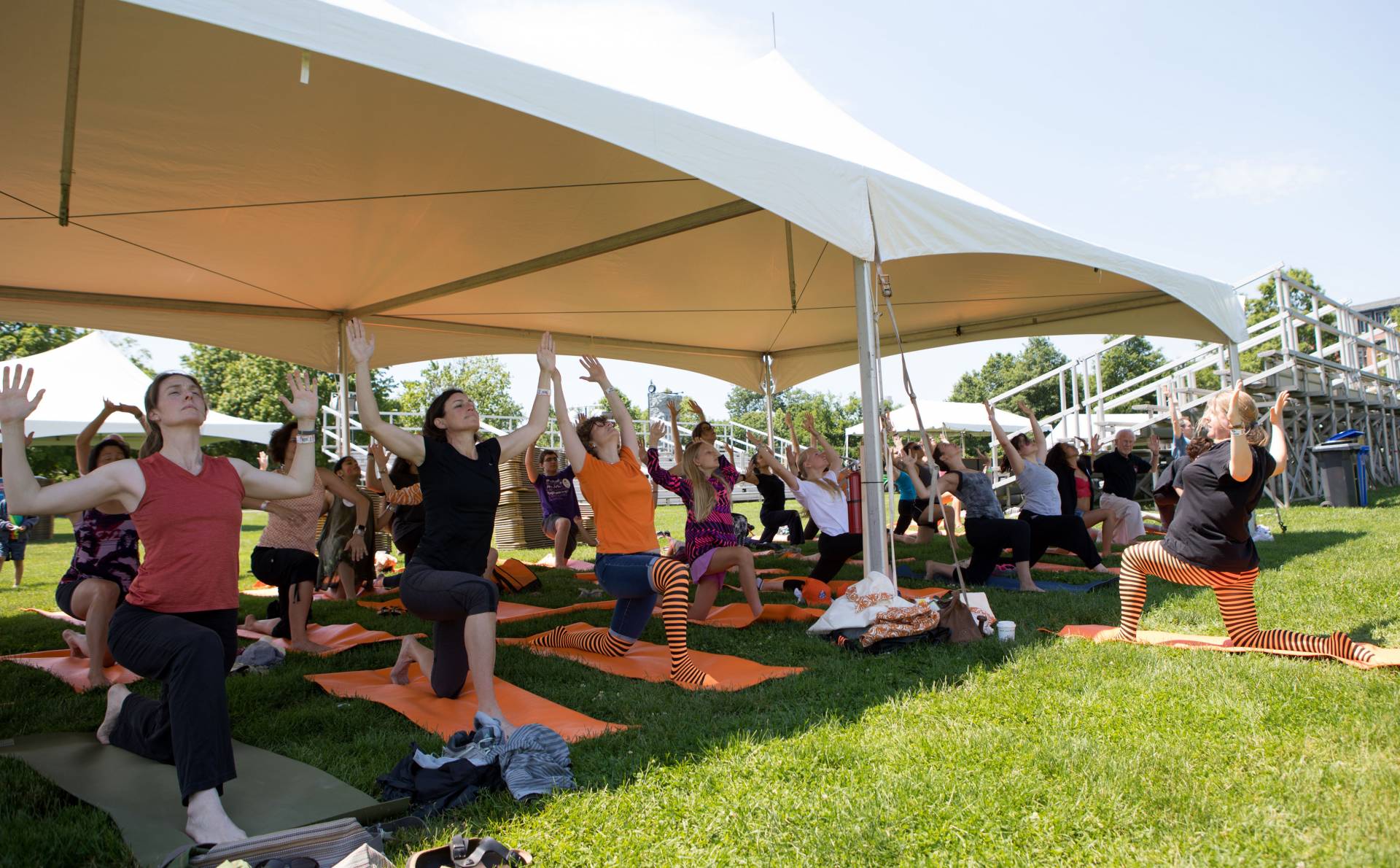 Just say "ohm": Amy Treciokas, a member of the Class of 1987 and founder of Yoga Now in Chicago, leads a yoga class on Poe Field. 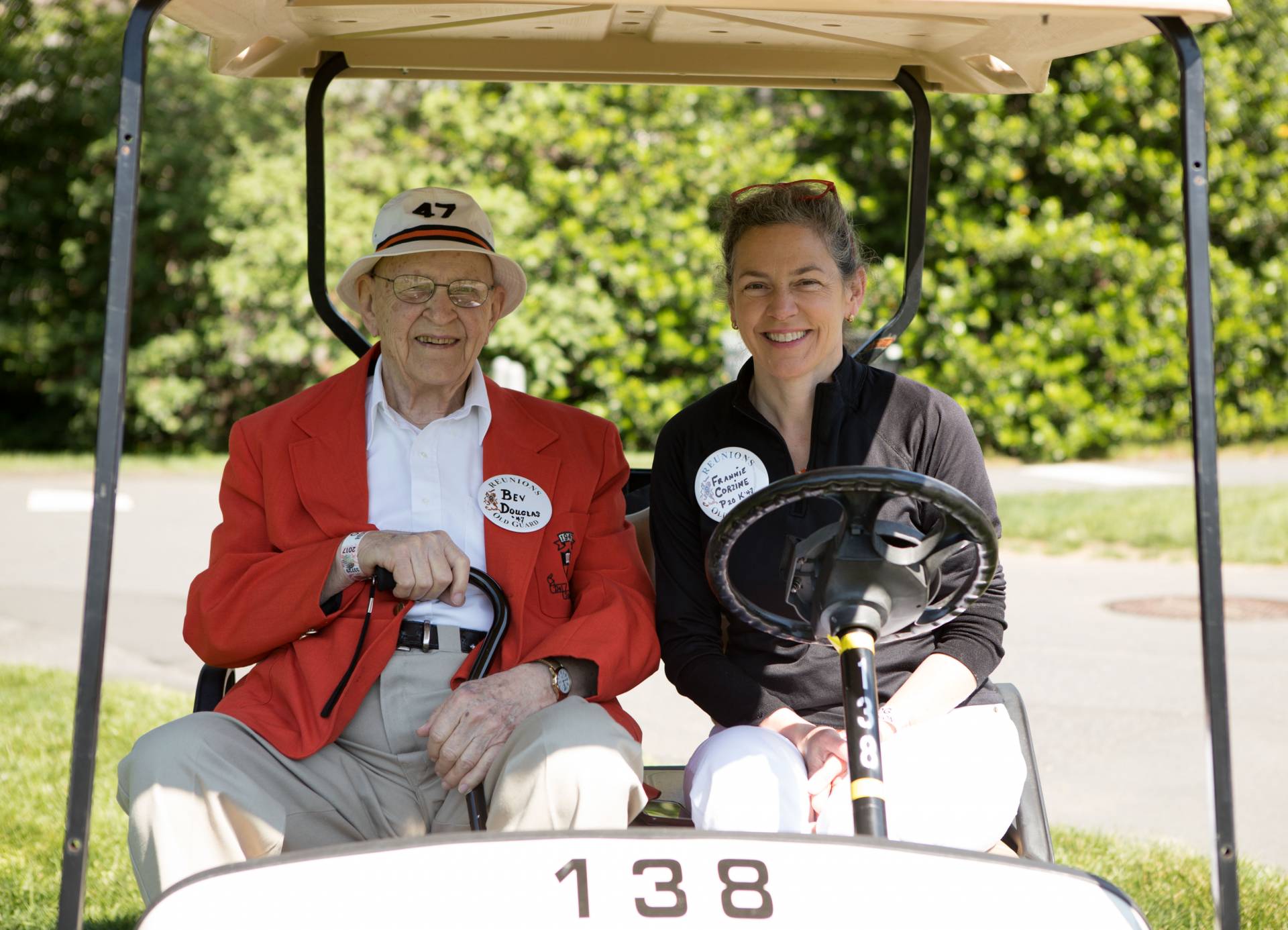 The Old Guard rides in style: Beverly Douglas, left, a 1947 alumnus from Columbia, Tennessee, takes in the sunny view from a golf cart driven by his daughter, Frannie Corzine. 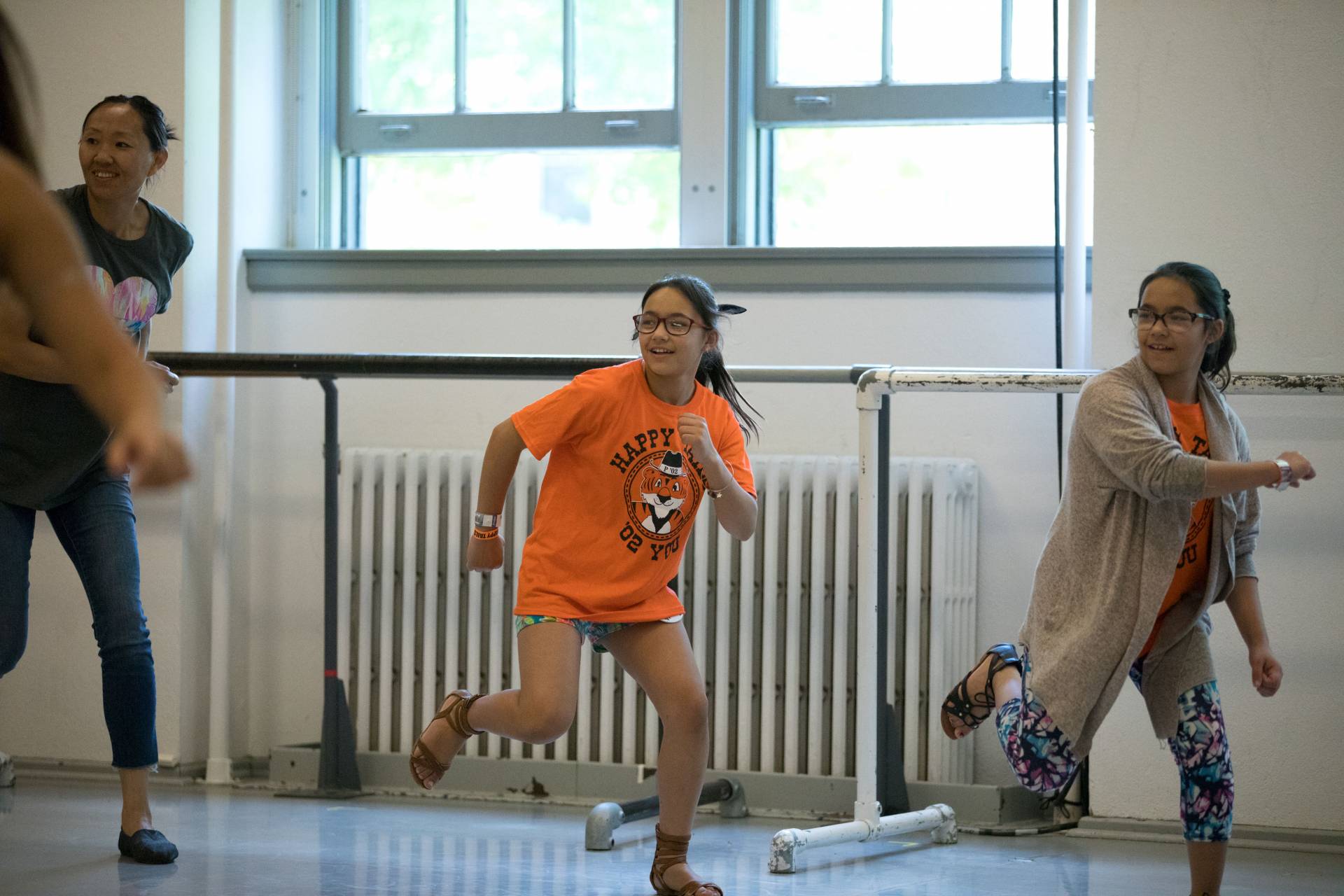 Tigers, the next generation: Antonía and Bernadette Venturi, daughters of 2002 alumnus Juan Venturi, take to the dance floor of the Hagan Dance Studio for a hip-hop workshop led by members of the student dance troupe eXpressions.