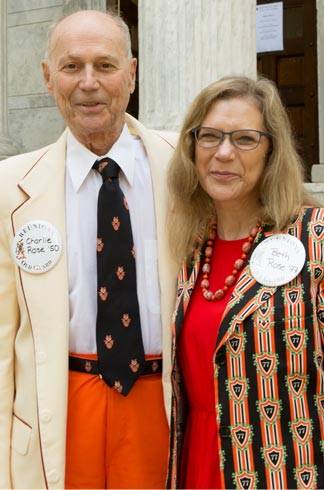 Approximately 25,000 Princeton alumni and friends are expected to attend Reunions 2016 Thursday, May 26, through Sunday, May 29. Class of 1977 graduate Beth Rose traveled all the way from New Zealand for the celebration and to visit her father, Charles Rose, president of the Class of 1950.

Approximately 25,000 Princeton alumni and friends are expected to attend Reunions 2016 Thursday, May 26, through Sunday, May 29. Class of 1977 graduate Beth Rose traveled all the way from New Zealand for the celebration and to visit her father, Charles Rose, president of the Class of 1950.

Princeton University alumni are arriving on campus by plane, train, car, foot and even float — P-rade float that is — for Reunions 2016. Approximately 25,000 alumni and friends are expected to attend the celebration Thursday, May 26, through Sunday, May 29.

Among the alumni on campus Thursday were Class of 1986 graduates Jim Cohen and Ed Zschau, who drove from Houston in Cohen's orange and black Jeep with "86" emblazoned on the hood, doors and seats. The vehicle will serve as the lead 30th Reunion float in the P-rade on Saturday.

"It was definitely worth the drive to come to Reunions," Cohen said. "We had a great road trip seeing different parts of the country and visiting other Princetonians along the way." 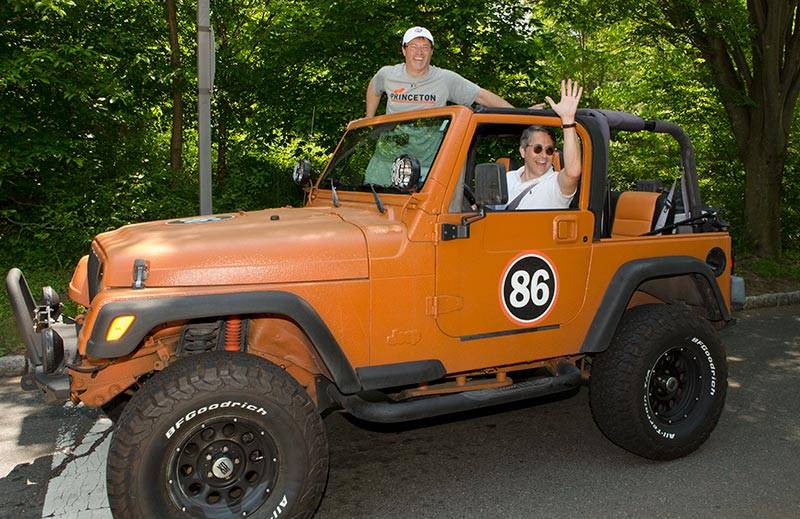 Class of 1986 graduates Jim Cohen (right) and Ed Zschau drove to Princeton from Houston in Cohen's orange and black "86" Jeep. The vehicle will be the lead 30th Reunion float in the P-rade on Saturday.

Class of 1977 graduate Beth Rose was not first to arrive, but may have come the farthest. Rose has traveled from New Zealand to Reunions every year since 1997. She said the journey is worth it because she gets to visit her father, Charles Rose, president of the Class of 1950.

The weekend also is about family for Nisha Cartee of the Class of 1998. Her husband Todd Cartee, father Sri Gupta and brother Anoop Gupta are all alumni. Nisha Cartee spent Friday afternoon with her young daughters and niece at the 20th Reunion's arts and crafts tent.

"It's kind of like a family reunion, but it's also a Princeton Reunion," said Nisha Cartee, who attended her first Reunion with her father when she was 2 years old. "It's also wonderful that there are so many fun things for the kids. We just go from tent to tent checking out the different activities." 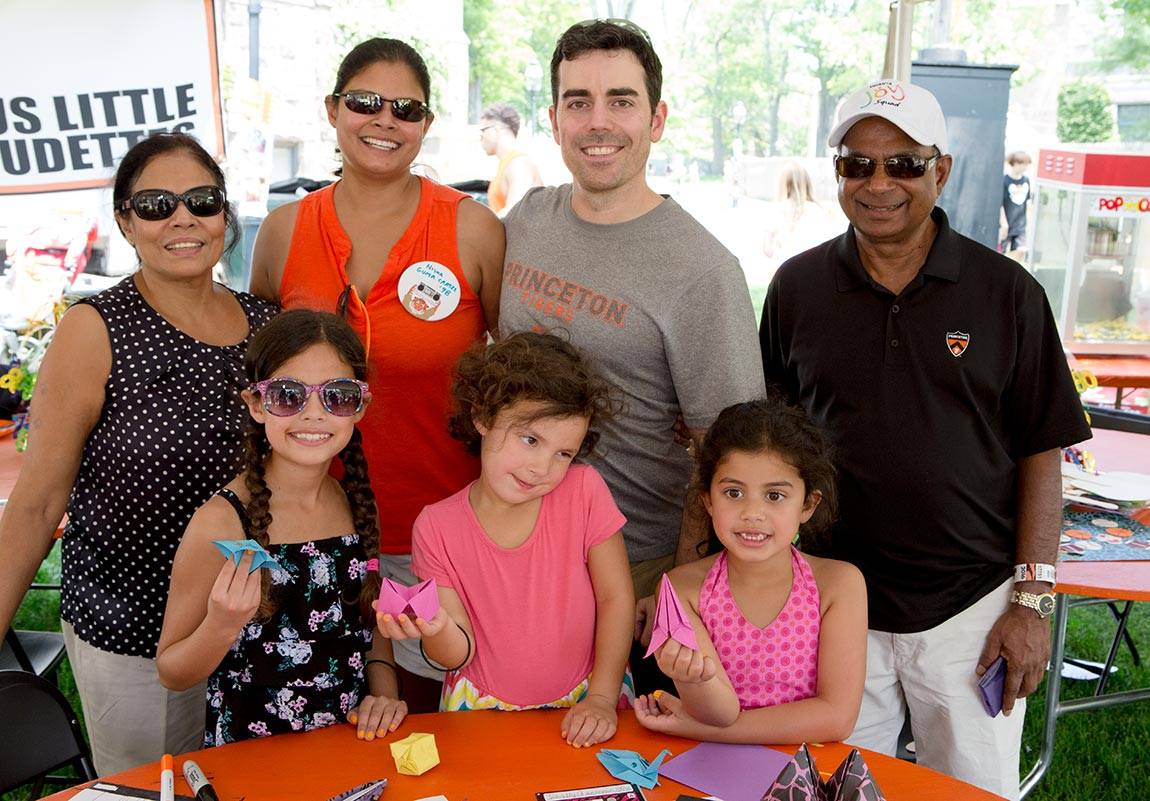 Nisha Cartee of the Class of 1998 (second from left in back row), says Princeton Reunions are also like a family reunion because her husband (second from right), father (far right) and brother (not pictured) are all alumni. Here, the family enjoys arts and crafts at the 20th Reunion headquarters.

The weekend features the talents of a variety of student groups, including a Juggling Club workshop on Cannon Green, Fuzzy Dice improv comedy in the U-Store Courtyard and an eXpressions Dance Company showcase at the Lewis Center for the Arts.

A schedule of events and other key content is available on the Reunions 2016 website and the Reunions Mobile website for mobile devices. Alumni can follow Princeton Reunions on Facebook,Twitter and Instagram. Attendees also can engage in social media by using the hashtag #PrincetonReunions and signing up for Vivoom to shoot and share a special Reunions video. 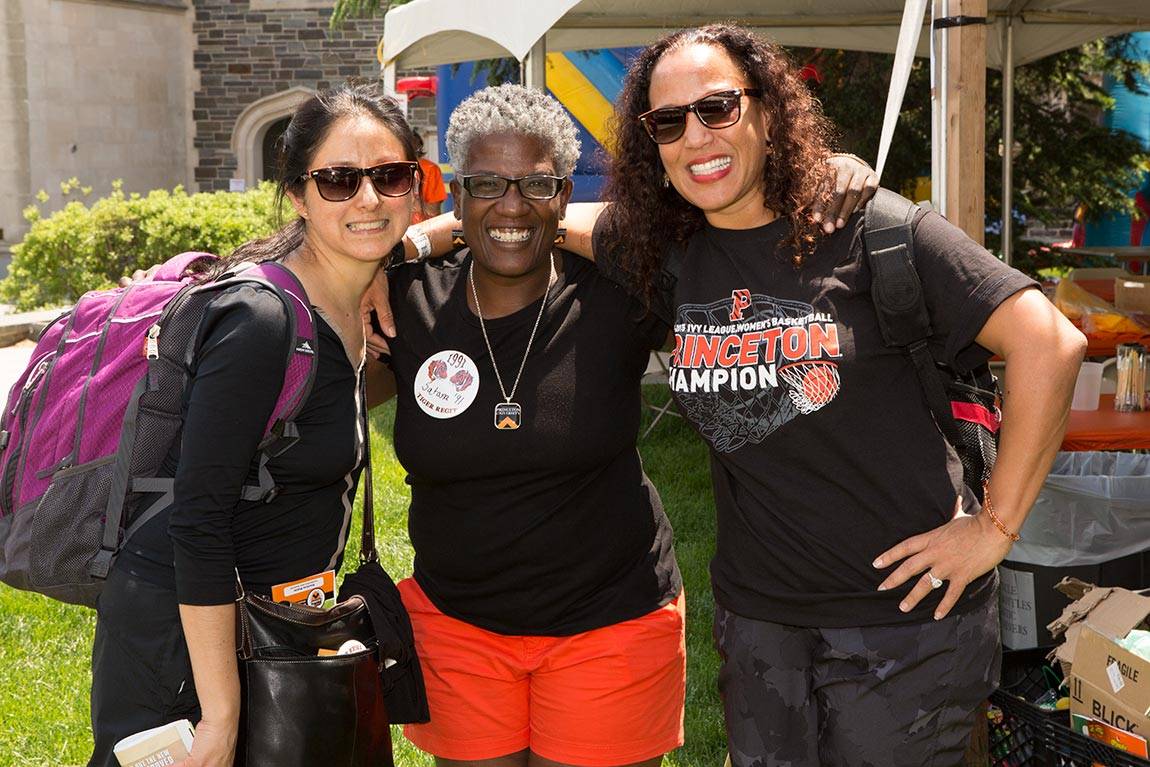 (Left to right) Alumnae Irma Martinez, Satana Deberry and Julianna Edwards reconnect at the 25th Reunion headquarters in Whitman College courtyards. Deberry said she "really grew up" while attending Princeton and tries to come back for every Reunion.

Satana Deberry, Class of 1991, reunited with friends at the 25th Reunion headquarters in Whitman College courtyards. Deberry drove to Princeton with her daughters from North Carolina, where she is executive director of the nonprofit North Carolina Housing Coalition.

"Everything about Reunions is my favorite part," Deberry said with a laugh. "Princeton was the best time of my life. I feel like I really grew up here. It was a big culture shock at first coming from a small town in North Carolina, but after being here for a while I felt like I could do anything. There is just so much opportunity for students at Princeton." 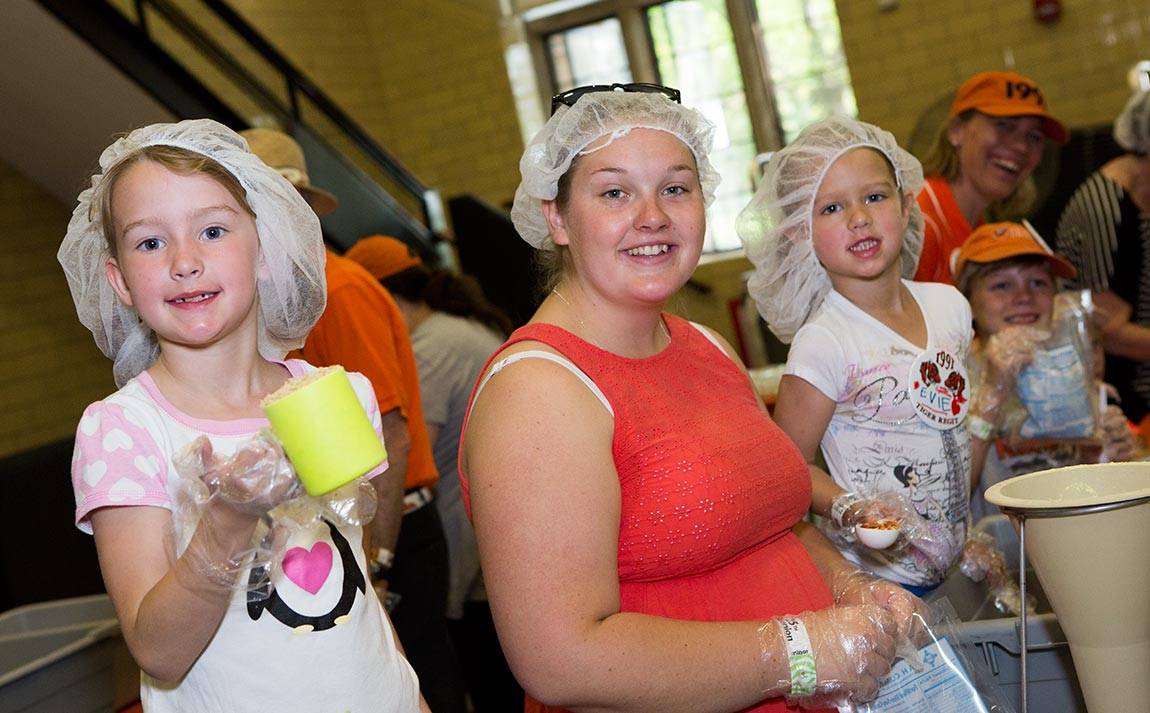 On Friday morning, Deberry and other alumni gathered in Dillon Gymnasium to pack food for the Kids Against Hunger Coalition. The community service project was sponsored by the Class of 1991, along with the classes of 1990 and 2011 and the Association of Princeton Graduate Alumni.

"Our goal is to pack 40,000 bags in four hours," said Class of 1991 graduate Jennifer Lublin. "A third will be given locally to the Mercer Street Friends Food Bank, a third will be donated across the country and a third will be sent abroad for disaster relief efforts." 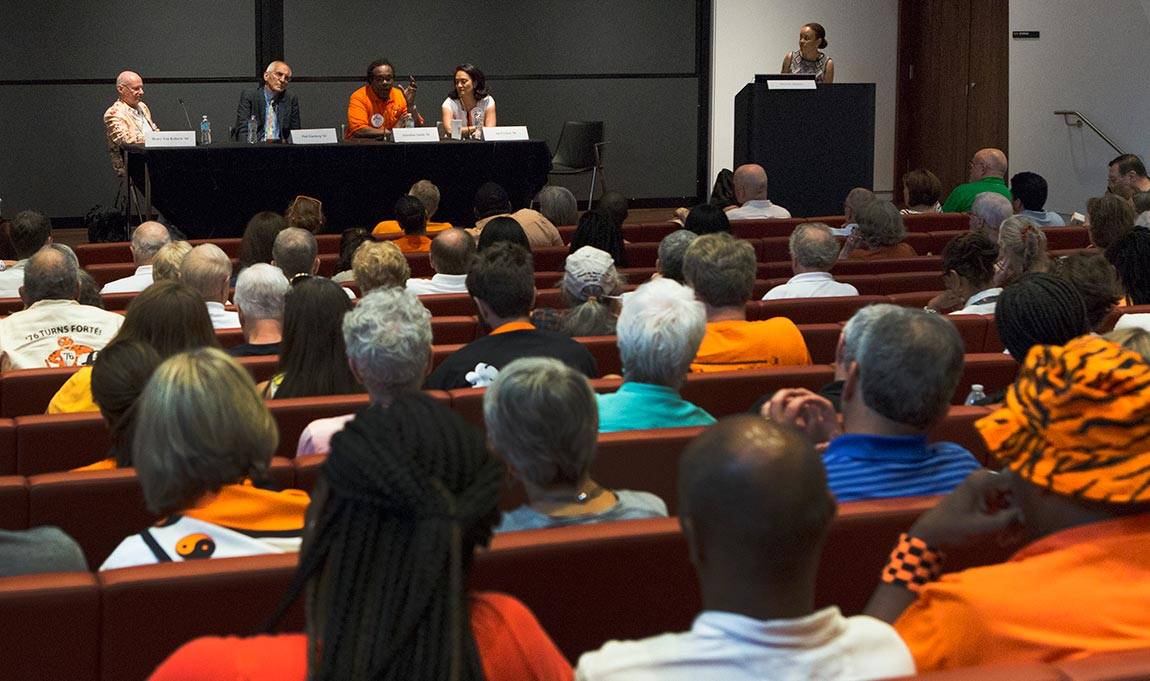 Princeton Professor of History and African American Studies Tera Hunter (far right) moderates the Alumni-Faculty Forum "Race Relations: Are We All Seeing the Same Issues?" on the Friday afternoon of Reunions in Maeder Hall Auditorium.

A panel on "The Future of the University Experience" in Whig Hall Senate Chamber featured, among others, Mitch Daniels, Class of 1971, president of Purdue University and former governor of Indiana; Jared Polis, Class of 1996 and a U.S. Representative from Colorado; and Jill Dolan, Princeton's dean of the college, Annan Professor in English and professor of theater in the Lewis Center for the Arts.

"The kind of education that higher education is committed to is education for life; not education for careers," said panelist Vanessa Schwartz, Class of 1986 and professor of history, art history and film at the University of Southern California. "Princeton students who undergo a liberal arts and science education … are really prepared for a life of learning and a life of change and adaptability."

In McDonnell Hall, alumni debated the topic "Entrepreneurs — Are They Wired Differently?" Class of 1996 graduate Sabrina Parsons, CEO of Palo Alto Software, addressed the question as it relates to women entrepreneurs. She said there are not as many women entrepreneurs as there should be in 2016.

"I feel like women have more of an opportunity being entrepreneurs today, but they definitely have to be contrarians," she said. "They have to fight against people telling you it can't work or it shouldn't work. Being CEO of my tech company allowed me to choose where my company is located, to choose my schedule. I've made choices that have allowed me to be completely invested in my company while still feeling like I can be a really good mom." 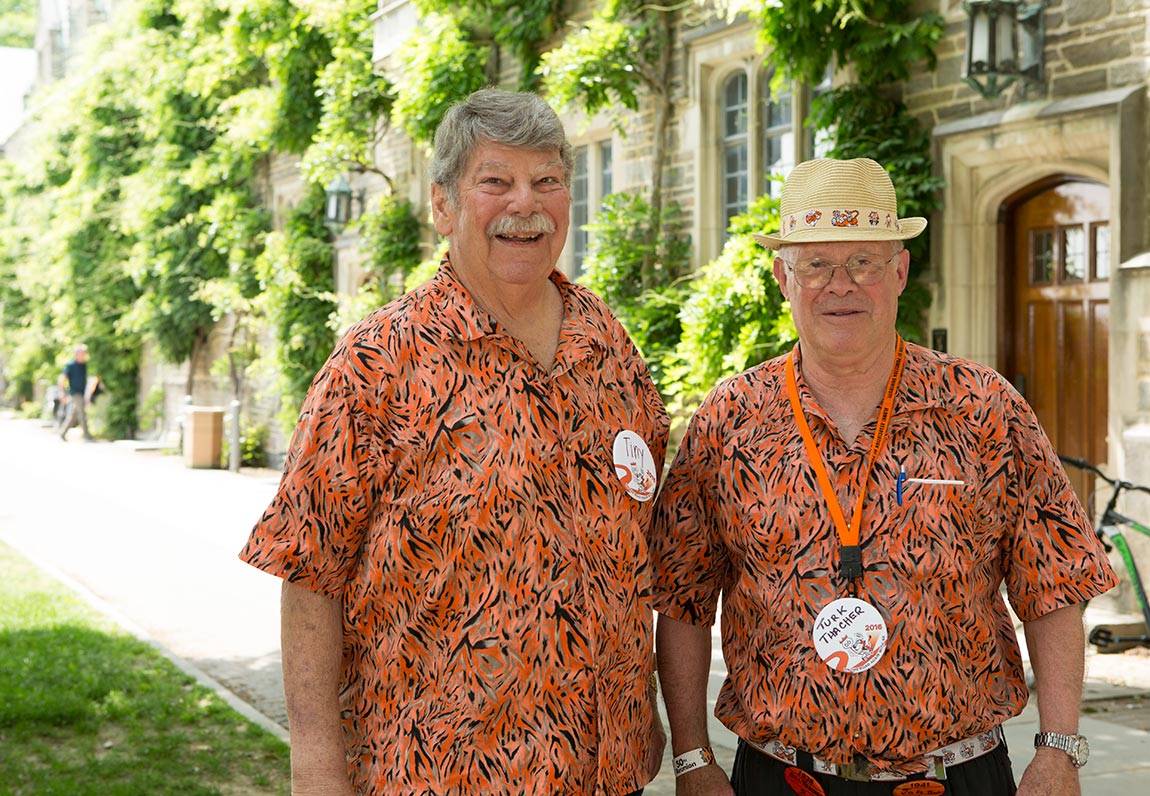 Richard "Tiny" Morgan (left) and John "Turk" Thacher have been co-chairs of the Class of 1966 Reunions Committee since their 10th Reunion in 1976. Thacher said they knew each other as undergraduates, but did not become "best buddies" until working together to plan Reunions.

Across campus in Blair-Joline Courtyard, Richard "Tiny" Morgan and John "Turk" Thacher greeted classmates at the 50th Reunion headquarters. Morgan and Thacher have co-chaired the Class of 1966 Reunions Committee since their 10th Reunion in 1976.

"We knew each other as undergraduates, but did not become best buddies until working together as alumni," Thacher said. He first attended Reunions as a 3-year-old with his father, who had graduated from Princeton in 1941.

Morgan said their goal is to organize a weekend of activities that will appeal, in some way, to every returning classmate.

"It is very important that we be inclusive in our planning," Morgan said. "Every Reunion is special to me because we get to visit with old and new friends, enjoy different entertainment and activities, and attend the exceptional Alumni-Faculty Forums on every conceivable topic that are organized by the University." 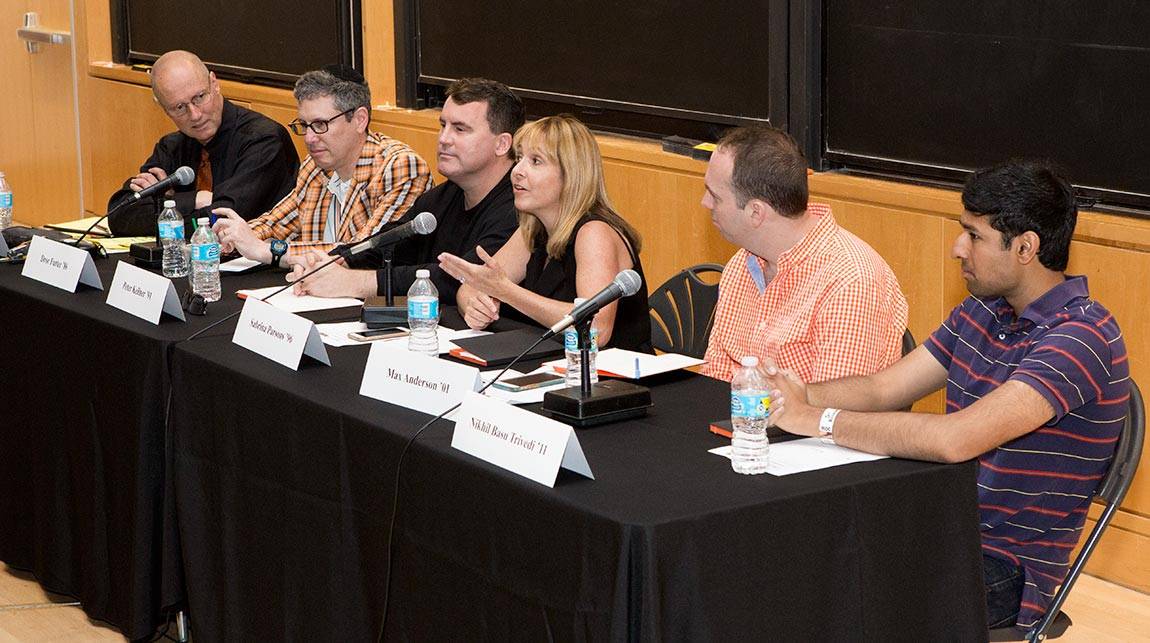 Class of 1996 graduate Sabrina Parsons (center) speaks at the Alumni-Faculty Forum "Entrepreneurs — Are They Wired Differently?" Parsons, CEO of Palo Alto Software, and other alumni shared their opinions on what it takes to be a successful entrepreneur.

Reunions festivities will continue through the weekend. Highlights include:

All alumni, guests, faculty and staff are required to have wristbands for entry to all Reunions headquarters sites for evening entertainment as well as alcoholic and non-alcoholic beverages. Wristbands are not required for attending lectures or performances, watching the P-rade, or attending the concert and fireworks.

Alumni may visit the Reunions 2016 website for information about registration and wristband pick-up locations. 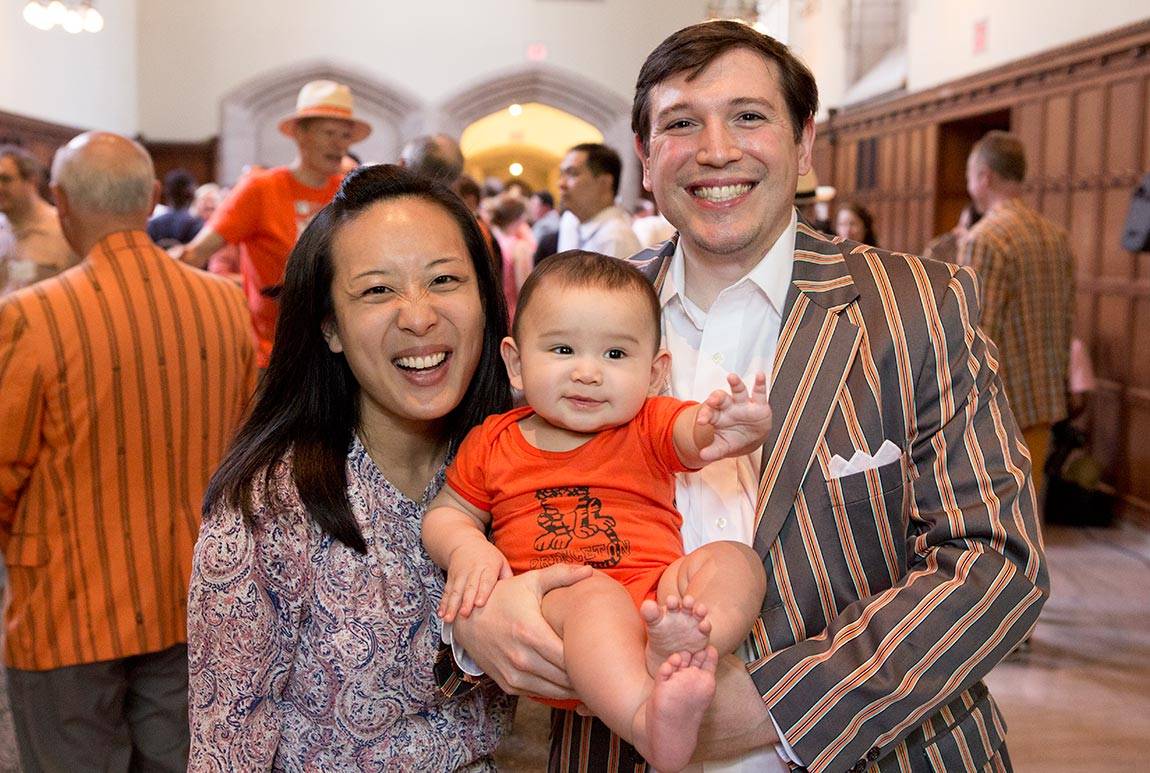 Kevin Smith, who earned a Master in Public Affairs from the Woodrow Wilson School of Public and International Affairs in 2012, traveled from Kentucky for Princeton Reunions with his wife, Tina, and their son, Theodore. 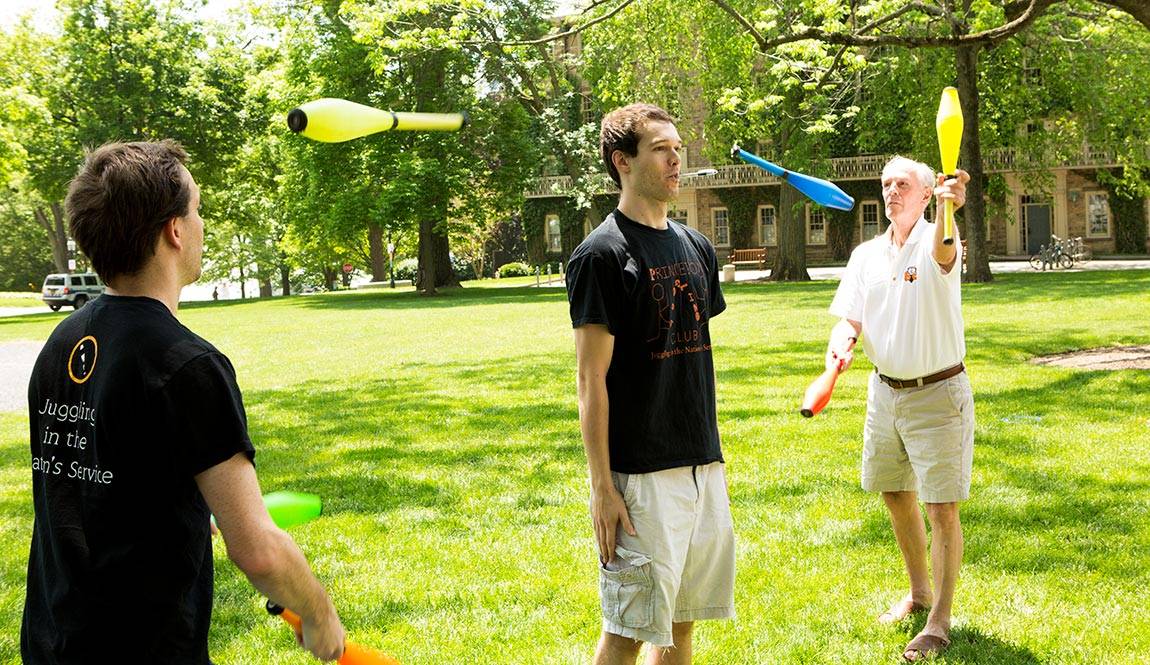 Class of 1962 graduate Robert Burkhardt (far right) shows off some tricks with students from the Juggling Club during Reunions. 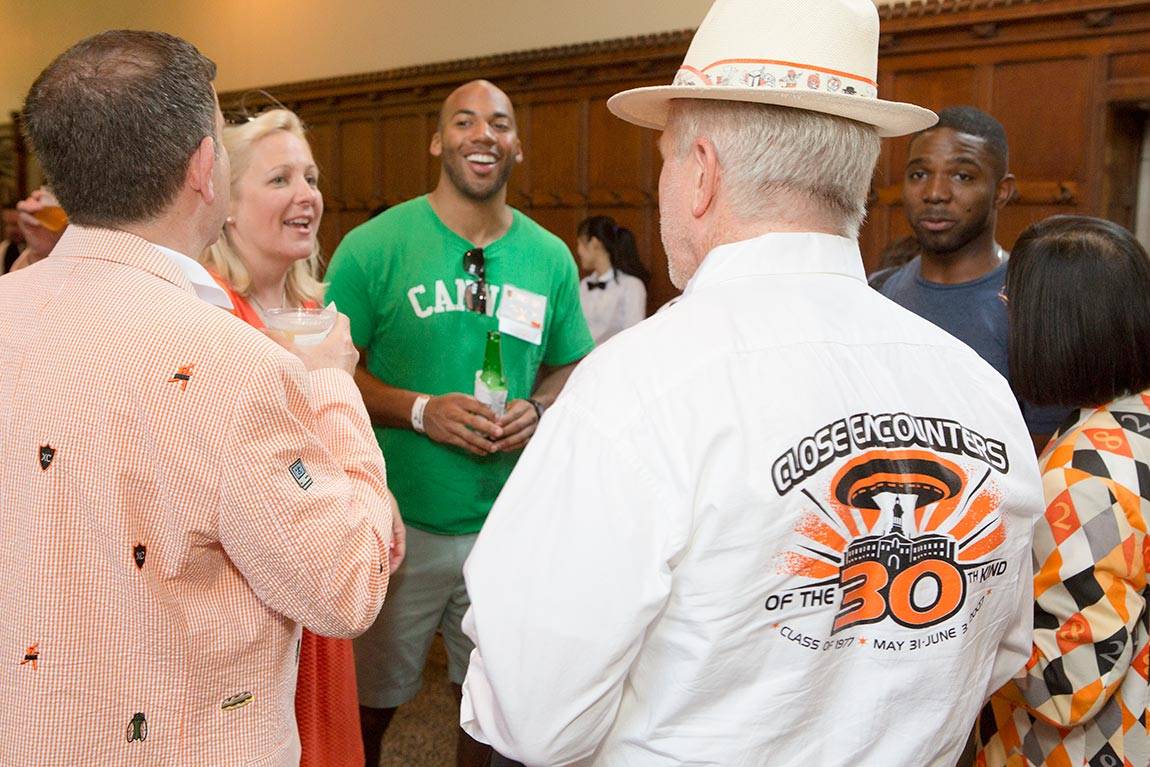 Alumni from a range of classes mingle at a reception in Rockefeller College Common Room for alumni volunteers. 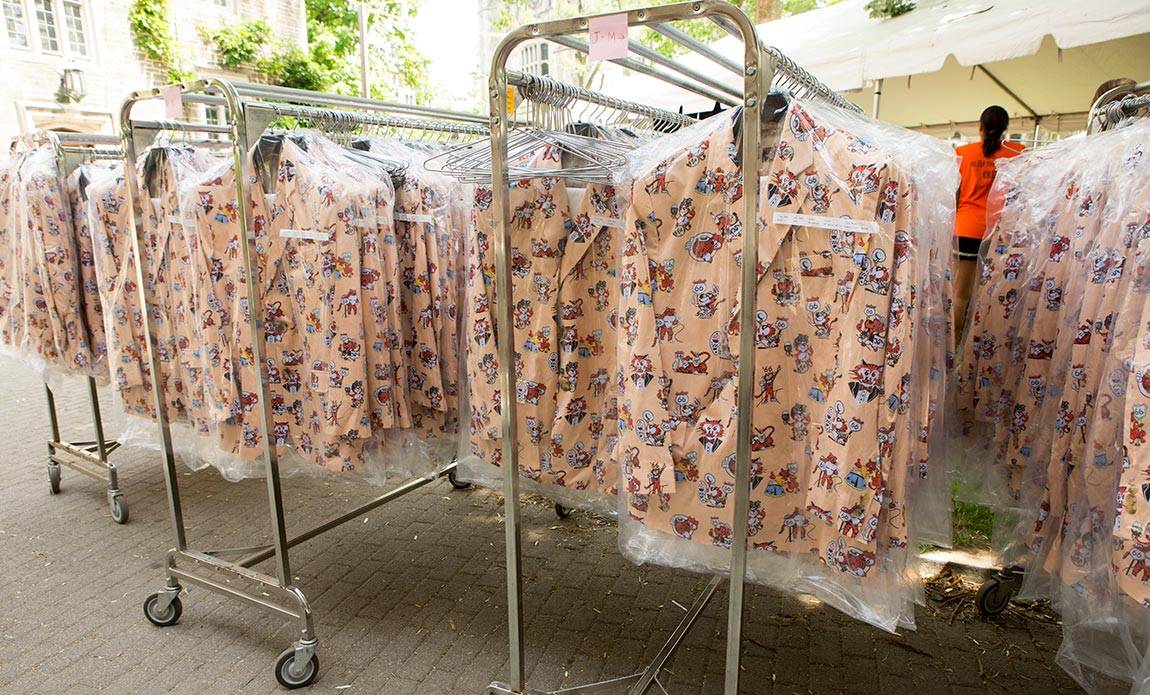