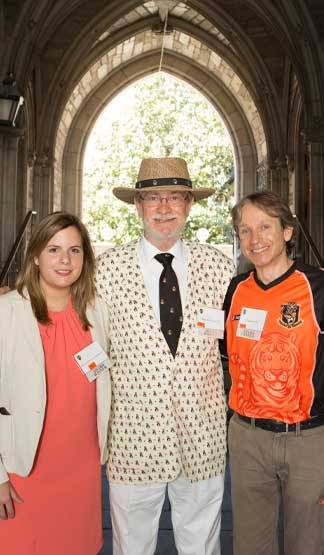 Nearly 25,000 Princeton University alumni, family and friends are on campus for Reunions 2015. The event began Thursday, May 28, and will run through Sunday, May 31. Above: Class of 2010 graduate Monica Ramirez de Arellano (left), who interviews prospective students in Brazil via video, joined Michael Royster, a 1964 alumnus and founder of the alumni club in Brazil, and Craig Leon, a member of the Class of 1985 — both residents of Brazil — to accept the S. Barksdale Penick Jr. '25 Award at the annual alumni awards reception.

Nearly 25,000 Princeton University alumni, family and friends are on campus for Reunions 2015. The event began Thursday, May 28, and will run through Sunday, May 31. Above: Class of 2010 graduate Monica Ramirez de Arellano (left), who interviews prospective students in Brazil via video, joined Michael Royster, a 1964 alumnus and founder of the alumni club in Brazil, and Craig Leon, a member of the Class of 1985 — both residents of Brazil — to accept the S. Barksdale Penick Jr. '25 Award at the annual alumni awards reception.

They filled tents, lawns, gardens, classrooms and the venerable stone arches and courtyards throughout the campus. They hugged, cheered and introduced new family members. They listened intently at panel discussions with faculty and alumni. And most of all, they celebrated Princeton traditions such as donning their class jackets — or anything in orange and black.

Nearly 25,000 Princeton University alumni and friends are on campus for Reunions 2015. The event began Thursday, May 28, and will end Sunday, May 31.

Amir Parsa, a member of the Class of 1990 and a native of Tehran, Iran, said he was looking forward to wearing his class jacket — along with his requisite orange socks and a black T-shirt — and reconnecting with friends at his 25th reunion. He returned to campus last year for the first time since graduation.

"The 'return' to my 24th reunion ended up being very revelatory and comforting," said Parsa, the director of academic transdisciplinary initiatives at the Pratt Institute in New York City. "There was an initial and strange sense of anxiety and dread, but it all dissipated once I was on campus. It felt like no matter how long you're away or how far, you're always connected."

Parsa only had to travel from New York to get to Reunions. Charles Slack, a 1950 alumnus and 1954 graduate alumnus, and his wife, Sue, flew halfway around the world from Perth, Australia, for his 65th reunion. The last time they visited campus was 10 years ago, for Slack's 55th.

A retired psychologist and pastor who is chairman of B-Attitudes, a drug rehabilitation program, Slack said he was looking forward to "showing I can still fit in my Class of '50 uniform — with the same belt size."

Princeton, the next generation: Several alumni had babies in tow as they enjoyed Reunions activities. From left: Olivia Albrecht, a member of the Class of 2005, and daughter Celestine Albrecht-Pieter; Justin Mikolay, a 2003 graduate alumnus of the Woodrow Wilson School of Public and International Affairs and head of the Association of Princeton Graduate Alumni, with his wife, Maggie, and son, Teddy; and Melissa Turitz, a 2003 alumna and spouse of Class of 2005 member Erik Williamson, and daughter Linnea Williamson.

At a reception hosted by Career Services to thank the alumni who work with them through the year, Suzanne Israel Tufts, a 1977 alumna, and Nina Lytton, a member of the Class of 1978, admired the newest gallery space on campus — in Career Services' revamped headquarters at 36 University Place. The gallery will feature rotating collections of student art throughout the year.

"We were neighbors across the arch in Little Hall," said Lytton, referring to Tufts.

Lytton and Tufts attended a "Career and Life Vision" workshop earlier in the day, in which alumni and undergraduates exchanged feedback on their aspirations. "Princeton adds light to your life and gives you a chance to shine that light back," said Lytton, whose nephew is a member of the incoming Class of 2019. 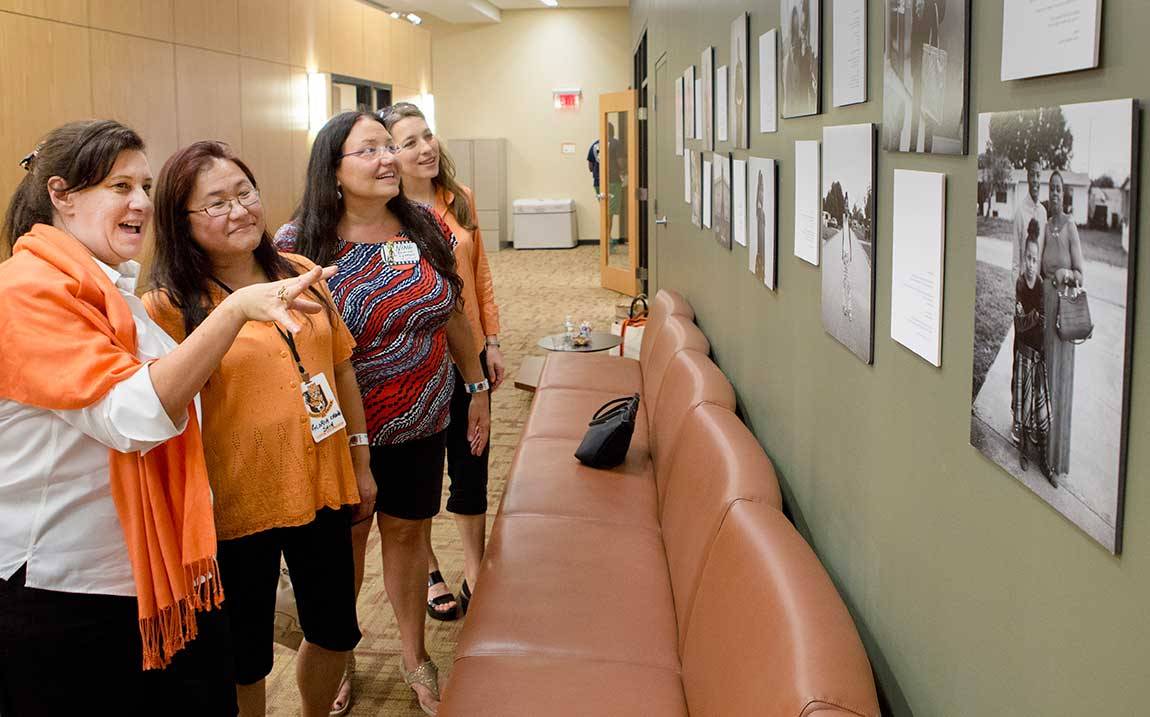 Class of 1977 graduate Suzanne Israel Tufts (left); Gloria Chang Shih, a 1985 alumna; Nina Lytton, a member of the Class of 1978; and Caroline Barna Manning, a 1995 alumna, admire artwork by senior Amber Stewart in the new gallery in the Office of Career Services.

On Friday morning in Dillon Gym, alumni and their families reflected the University's commitment to service by packaging meals for the Kids Against Hunger Coalition, an international organization whose mission is to reduce the number of hungry children in the United States and around the world. The Class of 1990 organized the community project.

Julie Camp, a 1990 alumna, said she came because "this is a great opportunity to give back and help others, and I wanted to bring my children as well." 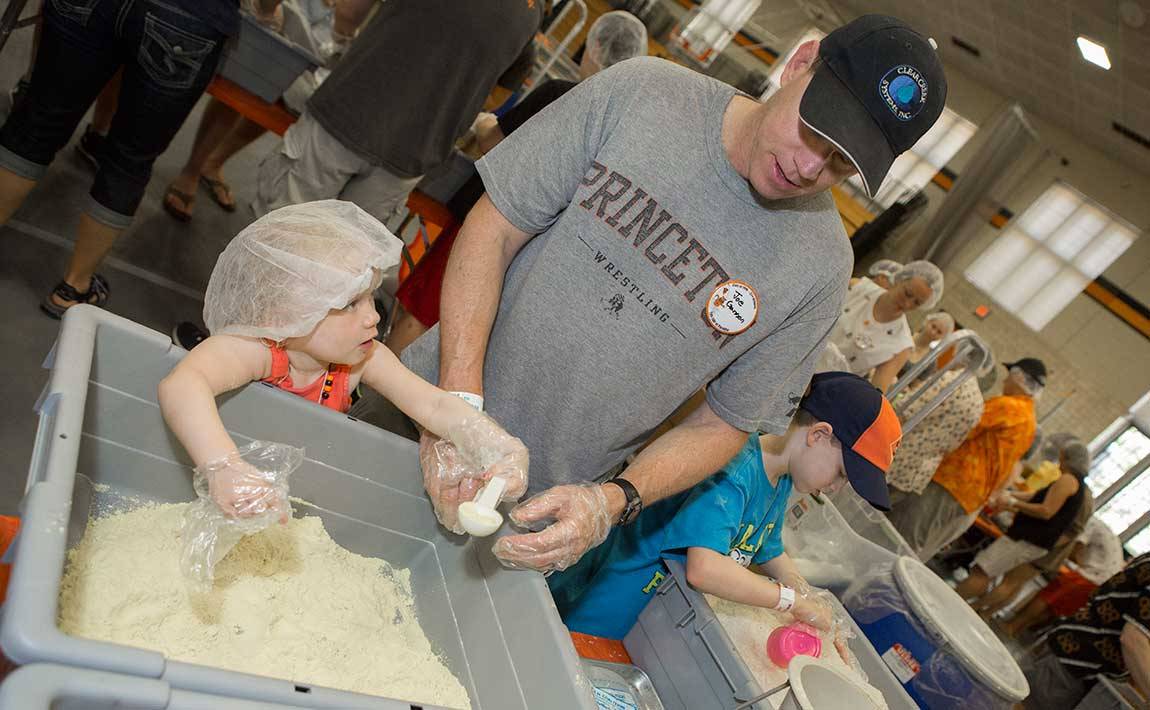 Class of 1990 alumnus Joe Gannon and his daughter Annabelle pitch in to help package meals for the Kids Against Hunger Coalition as part of a Reunions community service project.

Rory Truex, a 2007 alumnus and assistant professor of politics and public affairs at the Woodrow Wilson School of Public and International Affairs, served as the moderator at the alumni-faculty forum "What China Stands For in the New World Order." He asked the panelists to comment on the contradictions China faces — such as "human rights issues, its foreign policy in the South and East China Seas that borders on the absurd, and socialist rhetoric" — as its presence on the global economic stage grows.

"There is the Silk Road economic belt in one direction, extending from central China through Pakistan and Turkey into Europe … and the maritime Silk Road extending through Southeast Asia, Singapore, Sri Lanka and India to the east coast of Africa," Fung said. "All emphasis in terms of China's new economic relations is based on that."

"What China Stands For in the New World Order" was one of the many alumni-faculty forums taking place during Reunions. From left to right: Moderator Rory Truex, a 2007 alumnus and assistant professor of politics and public affairs at the Woodrow Wilson School of Public and International Affairs; panelists Ira Kasoff, a 1982 graduate alumnus and senior counselor at APCO Worldwide; Owen Nee Jr., a Class of 1965 graduate and senior counsel at Greenbert Traurig LLP; William Fung, a 1970 alumnus and former University trustee, group chairman of Li & Fung Limited and chairman of Global Brands Group Holding Limited; Anne-Marie Slaughter, a 1980 alumna and president and CEO of the New America Foundation; and Class of 1990 member Peter Winn, founder and CEO of Talent Education Group.

Walking into McCosh Hall, Room 10, for the alumni-faculty forum "The Crisis in Public Education," Artilie Wright, a 2006 alumna, said she looks forward to Reunions every year — and has brought her sister with her to three Reunions. "I'm excited to connect with classmates, be back on campus and engage in intellectual conversations," she said. 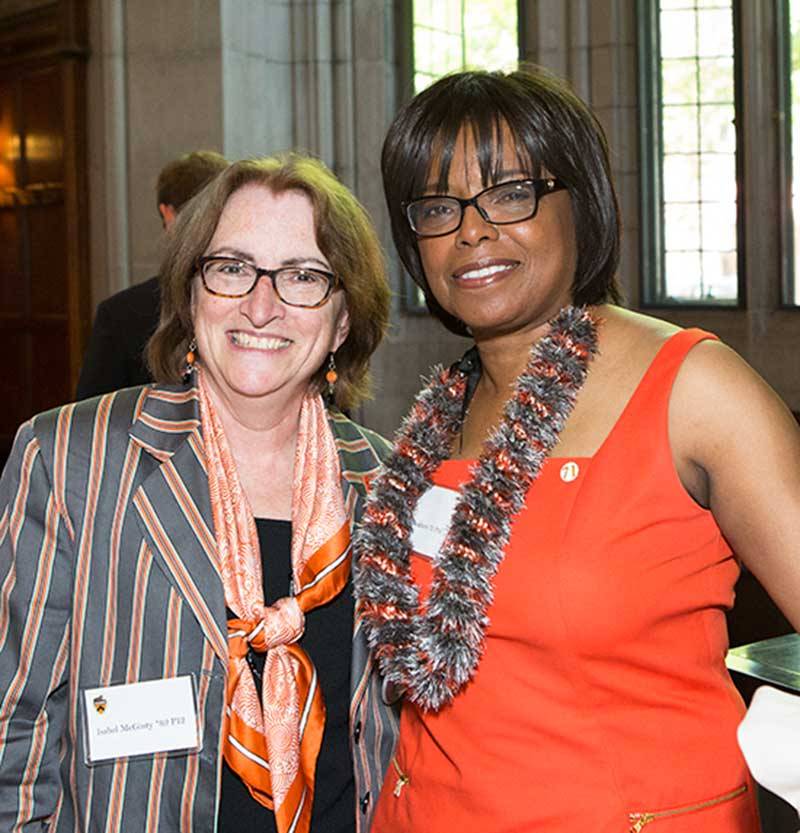 Isabel McGinty, a 1982 graduate alumna (left) and parent of a Class of 2012 graduate, and Linda Bell Blackburn, a 1971 alumna and parent of a member of the Class of 1995, enjoy a conversation at the annual alumni awards reception.

Michael Royster, a 1964 alumnus and the founder of the Princeton alumni club in Brazil, flew from Rio de Janeiro to accept the S. Barksdale Penick Jr. '25 Award at the alumni awards reception. He said the award, which recognizes the recruiting activities of the regional Alumni Schools Committee (ASC), shows Princeton's appreciation of the importance of recruiting Brazilian students.

"The more [students] we admit, the more we'll get our name in front of potential students," Royster said. Joining him were Brasília resident Craig Leon, a 1985 alumnus and filmmaker whose award-winning film "Modern Nature" was screened at a morning panel, and Monica Ramirez de Arellano, a 2010 alumna and recent graduate of New York University School of Law. She met Royster while doing senior thesis research in Brazil and now conducts ASC interviews by video for prospective students in Brazil. 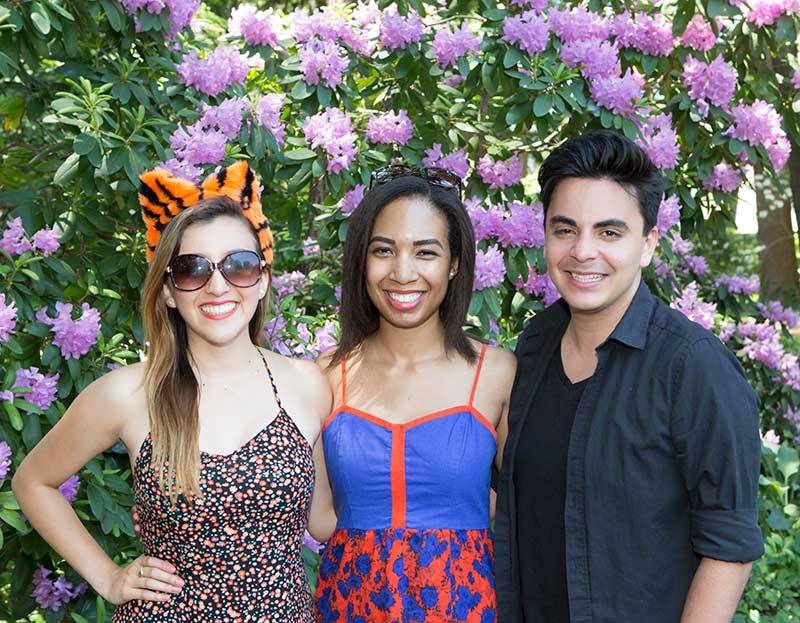 With rain in the forecast, Royster said he was looking forward to wielding his glow-in-the-dark Class of 1964 umbrella, along with all his official class gear — hat, jacket, tie and belt — and to getting the long-distance award from his class.

The fun and festivities will continue through the weekend. Highlights will include:
• A conversation with President Christopher L. Eisgruber at 10:30 a.m. on Saturday in Richardson Auditorium;
• The P-rade beginning at 2 p.m. Saturday;
• Alumni-faculty forums and department open houses Friday and Saturday;
• Evening performances by student groups Friday and Saturday; and
• The University Orchestra's lawn concert at 8 p.m. Saturday on Finney and Campbell fields, followed by fireworks at 9:15 p.m. 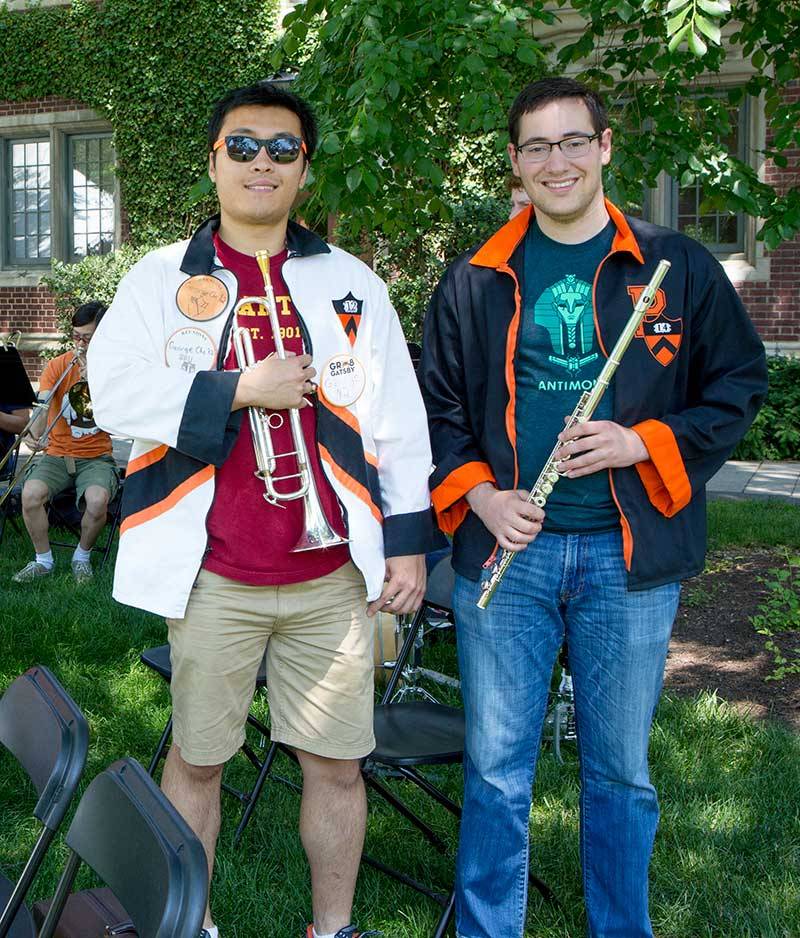 Trumpet player George Che, a member of the Class of 2012 (left), and flutist Ezra Spiro, a 2014 alumnus, tune up for the Princeton University Wind Ensemble Alumni Concert on the Class of 1879 Hall lawn.

Alumni and University representatives are required to have wristbands for entry to Reunions headquarters sites for evening entertainment as well as for alcoholic and non-alcoholic beverages. Wristbands are not required for alumni attending lectures or performances, watching the P-rade, or attending the concert and fireworks.

Alumni should visit the Reunions 2015 website for information about changes to registration and wristband pick-up locations for this year. The wristbands are not transferable, and applicants and guests must be 21 or older and have proof of ID. 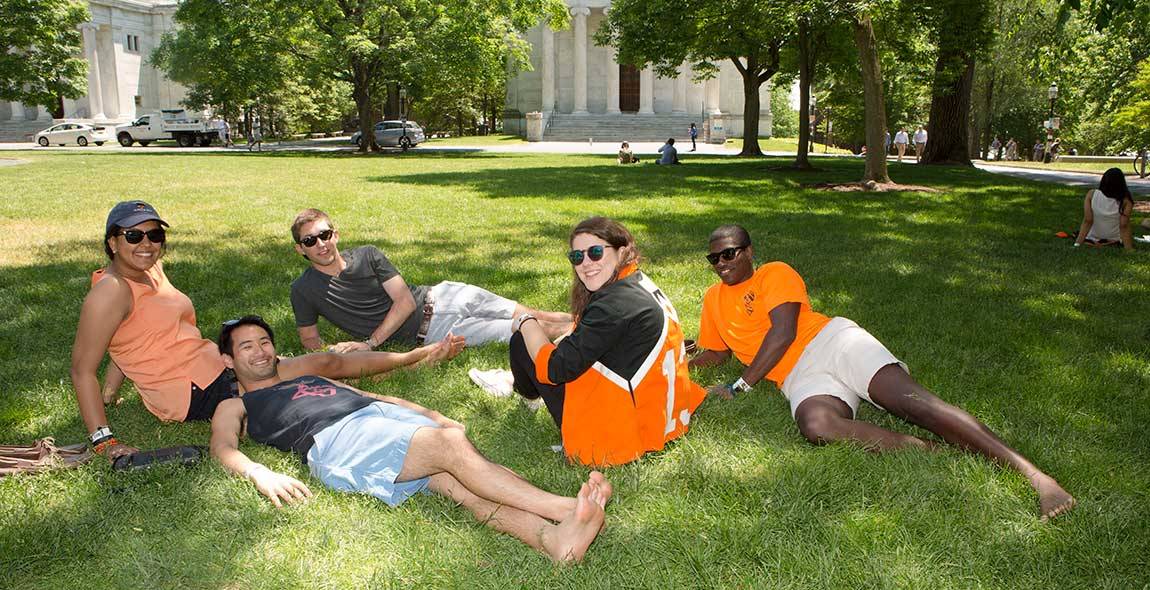 Reunions 2010 celebration is under way