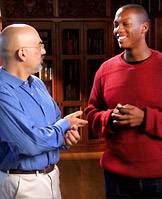 The Faces of Princeton video segment features Jared Crooks (right), a member of Princeton's class of 2011 who earned a degree in astrophysical sciences, and his mentor David Spergel, the Charles A. Young Professor of Astronomy on the Class of 1897 Foundation. "I think one of the empowering and demanding things about Princeton is a sense that you should do great things," said Spergel, who earned his undergraduate degree from the University in 1982.

Teacher. Adviser. Mentor. Professor David Spergel, a member of Princeton's class of 1982, has carried those titles for a generation of Princeton undergraduates.

"Thank you," Crooks says to Spergel, the Charles A. Young Professor of Astronomy on the Class of 1897 Foundation. "Your openness, strength and wisdom have been fundamental to my time at Princeton."

With a science policy career in his future, Crooks looks to add another title to his relationship with Spergel: colleague. Crooks, a scholar in the University's Scholars in the Nation's Service Initiative, now is about to embark on graduate studies in science policy at the Woodrow Wilson School of Public and International Affairs.

The video was produced as part of a series showcasing Princeton life and academics as part of "Aspire: A Plan for Princeton," which is the University's current $1.75 billion fundraising campaign.

'A New Way to Hire Tigers'