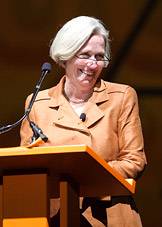 President Shirley M. Tilghman welcomes more than 1,000 alumni and friends to the Oct. 19 Aspire "thank you" celebration in Jadwin Gymnasium, noting that their contributions to the recently concluded fundraising campaign "helped to ensure that future generations of Princetonians will continue to receive the finest education of its kind." Many others joined the event via the Internet through live streaming.

Princeton University expressed its gratitude to more than 1,000 alumni and friends who contributed to the success of its recent fundraising campaign on Friday night by showcasing Aspire's impact.

The Oct. 19 "thank you" celebration, which took place in a transformed Jadwin Gymnasium, combined multimedia presentations with speeches and performances. A pair of 60-by-30-foot screens displayed images and video of programs and facilities that have been enhanced by the campaign, including recorded messages from Bridge Year students as they began their year of service abroad. On a stage in front of the screens, artists performed, Princeton faculty and researchers — including undergraduates — described their work, and alumni and students spoke of the ways in which the University has touched their lives.

President Shirley M. Tilghman, who served as emcee for the evening, told those attending in person and via the Internet through live streaming, "Together, you have helped to ensure that future generations of Princetonians will continue to receive the finest education of its kind and, thus equipped, will continue to make our world a better place for all."

The five-year campaign ended on June 30 after raising $1.88 billion, exceeding its goal of $1.75 billion. More than 65,000 donors — including more than 77 percent of all undergraduate alumni — contributed 271,559 separate gifts.

Aspire's areas of priority were Annual Giving, which provides unrestricted funds that the University can use immediately in the areas of greatest need and that typically provide significant support to the financial aid program; neuroscience; engineering and the environment; the arts; global initiatives; and "the Princeton experience," which encompasses all aspects of teaching, learning and campus life. 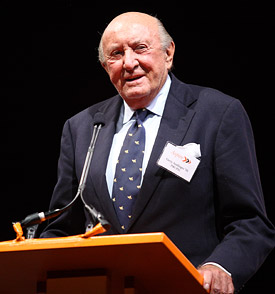 International business executive Gerhard Andlinger of the Class of 1952, whose 2008 gift created the Andlinger Center for Energy and the Environment, shares his story of arriving in Princeton from war-torn Europe. "Princeton offered me a whole new life," he said.

Speakers during the evening included international business executive Gerhard Andlinger of the Class of 1952, whose 2008 gift created the Andlinger Center for Energy and the Environment. He told of arriving in Princeton from war-torn Europe and finding a wealth of support and opportunities as a scholarship student at the University. Leslie-Bernard Joseph of the Class of 2006, a former Teach for America corps member who is now a student at Stanford Law School, and senior Brittany Sanders also shared personal stories of their Princeton experiences.

Lively performances throughout the evening featured the Princeton University Band; the breakdancing group Sympoh; Princeton Bhangra, which performed a South Asian folk dance; and the Triangle Club. Professional dancers Silas Riener of the Class of 2006 and Sydney Schiff of the Class of 2010 performed an original interpretive piece, accompanied by the Princeton University Orchestra conducted by Michael Pratt.

The program also showcased innovations in neuroscience and engineering. Jonathan Cohen, the Robert Bendheim and Lynn Bendheim Thoman Professor in Neuroscience and founding co-director of the Princeton Neuroscience Institute, presided over an experiment in which the audience saw the real-time brain activity of Research Specialist Jessica Jones as she viewed photos and live video from the event, while inside an fMRI scanner at another location on campus. Naveen Verma, assistant professor of electrical engineering, and Alexandra Landon and Eric Kuto, both of the Class of 2012, described their novel research projects. 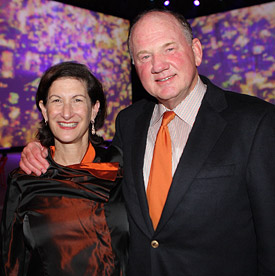 The evening concluded with several student a cappella groups leading the crowd in "Old Nassau," Princeton's anthem. The students then launched orange and silver streamers into the crowd while the "Cannon Song" played and photos of alumni, parents and friends appeared on the screens.

The festive evening was the culmination of a day of gatherings on campus sponsored by the Office of Development and the Alumni Association. Visiting alumni, parents and friends could choose to attend panel discussions and workshops led by faculty members and alumni. Panelists included Eric Schmidt of the Class of 1976, executive chairman of Google Inc.; Nobel laureate Paul Krugman, professor of economics and international affairs; and former Secretary of State George Shultz of the Class of 1942.

Activities concluded on Saturday with a panel discussion, the Tiger Tailgate and Princeton football's 39-34 victory over Harvard.

Tilghman now will travel around the country and abroad to thank donors at events in seven U.S. cities, Hong Kong and London. 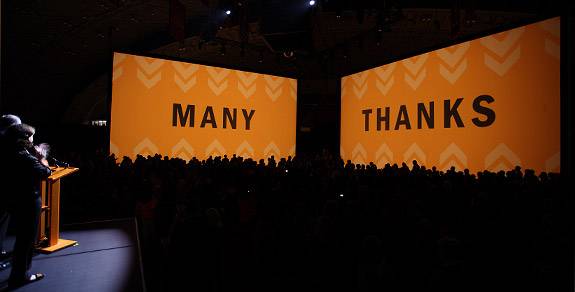 A multimedia presentation launches the celebration, showcasing enhancements made possible by Aspire. Alumni and friends gather in front of the words "many thanks" on a pair of 60-by-30-foot screens. 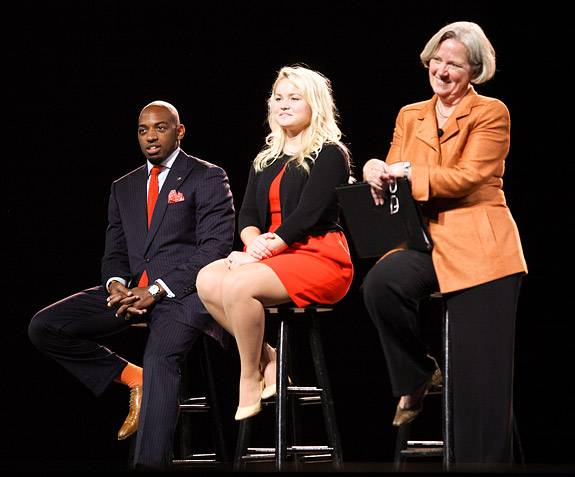 Leslie-Bernard Joseph of the Class of 2006 (left), a former Teach for America corps member who is now a student at Stanford Law School, and (center) senior Brittany Sanders listen to Gerhard Andlinger before sharing their own personal stories of Princeton experiences, as President Tilghman looks on. 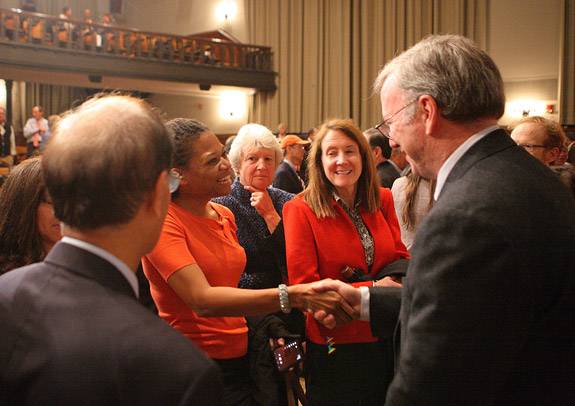 Earlier in the day, visiting alumni, parents and friends could choose to attend panel discussions and workshops led by faculty members and alumni. Panelists included Eric Schmidt of the Class of 1976, executive chairman of Google Inc., who chats with the audience following his panel on "The Future of Network Technology" in McCosh Hall, Room 50. 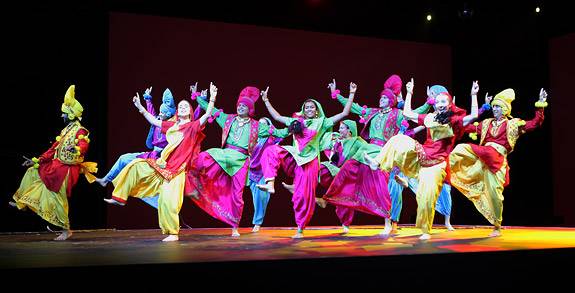 Princeton Bhangra, a South Asian folk dance group, performs — one of the many student groups showcased during the event. 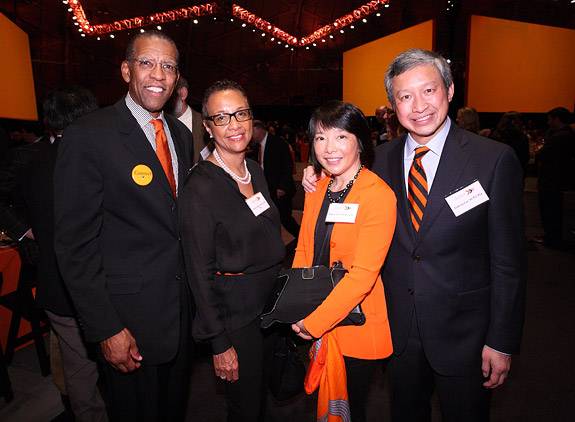 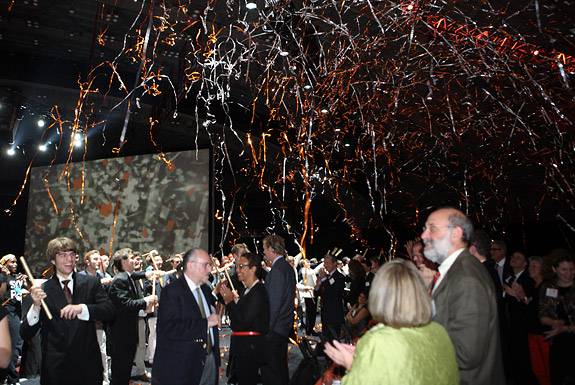 After leading the crowd in singing "Old Nassau," student a cappella groups launch orange and silver streamers while the "Cannon Song" plays for the celebration's finale.