Being at the very top of a social hierarchy may be more costly than previously thought, according to a new study of wild baboons led by a Princeton University ecologist.

A new study, "Life at the Top: Rank and Stress in Wild Male Baboons," published in the July 15 issue of the journal Science found that in wild baboon populations, the highest-ranking, or alpha, males have higher stress-hormone levels than the highly ranked males below them, known as beta males -- even during periods of stability. The findings have implications in the study of social hierarchies and of the impact of social dominance on health and well-being, a subject of interest among researchers who study human and other animal populations.

"An important insight from our study is that the top position in some animal -- and possibly human -- societies has unique costs and benefits associated with it, ones that may persist both when social orders experience some major perturbations as well as when they are stable," said lead author Laurence Gesquiere, an associate research scholar in Princeton's Department of Ecology and Evolutionary Biology. "Baboons are not only genetically closely related to humans, but like humans they live in highly complex societies." 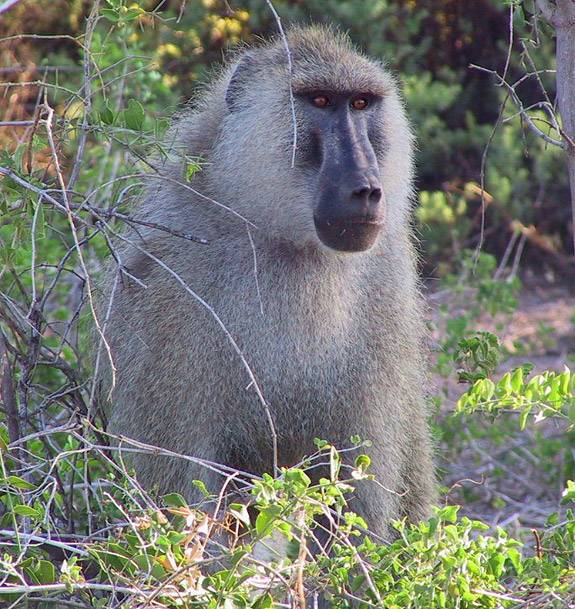 In a finding that has implications in the study of social hierarchies, researchers led by Princeton ecologist Laurence Gesquiere have learned that the highest-ranking, or alpha, males in wild baboon populations suffer higher stress levels than their lower-ranked counterparts. The study involved 125 adult male baboons in Kenya's Amboseli Basin. This adult male is vigilantly monitoring the activities of other members of his social group before taking action. (Photo by Jeanne Altmann)

For the new study, researchers measured levels of both a stress hormone called glucocorticoid and testosterone in fecal samples over a period of nine years. The data collected in the study is five to 10 times greater in duration, number of groups and number of individual males than any data previously available for any nonhuman primate, which allowed researchers to control for important variables that might have affected stress hormones, said Gesquiere.

According to study co-author and Duke University biology professor Susan Alberts, the large sample size and lengthy period of observation also meant the results didn't depend on characteristics of particular individual males, but rather reflect the long-term effects of dominance rank.

"We've known for decades that alpha males have an advantage in reproduction, but these results show that life at the top has a real downside, and that being an alpha male comes at a real cost," said Alberts.

Both Gesquiere and Alberts pointed out that the baboons' heightened stress levels are most likely based on the energy they must expend to maintain their social position, rather than psychological factors. For instance, alpha males are involved in a higher rate of fighting and mate guarding than beta males. They do not differ, however, in the rate of challenges to their status, which is considered a psychological stressor, or in the amount of grooming they receive from adult and juvenile females, which is a measure of psychological support.

"Baboons are likely to be good models to provide insights for identifying the ideal position in a complex society under different conditions," Altmann said of the study's potential insights into research on human behavior. "Humans also live in stratified societies, and social status is well known to be associated with some but not all health outcomes in humans.

"It has been difficult to identify many of the mechanisms behind these associations," she added. "Our results point to the need for research that will identify and evaluate the specific costs and benefits of various status positions, in various species, types of organizations and groups, and under different ecological conditions." 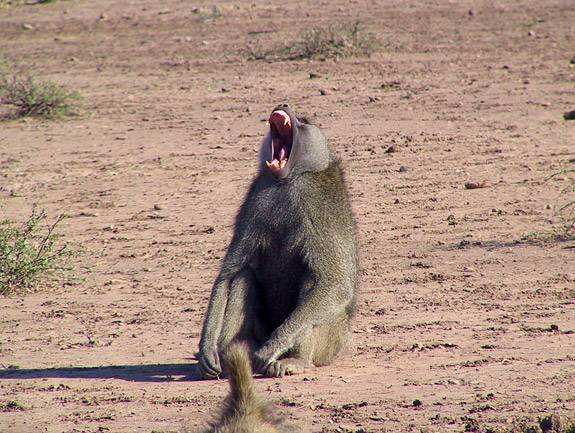 The study reveals long-term effects of dominance rank among alpha male baboons, who are involved in a higher rate of fighting and mate guarding than lesser-ranked males. This yawning adult male displays potentially dangerous canine teeth; yawns are often used as a threat between males. (Photo by Jeanne Altmann)