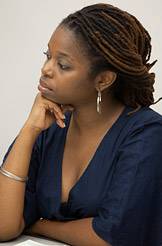 Fourteen undergraduates from colleges around the country are taking part in the annual Princeton Summer Undergraduate Research Experience (PSURE), a program run by the Graduate School for students who are interested in pursuing doctoral studies. Over the course of two months, the undergraduates are mentored through research projects that illuminate the rigors and challenges of independent research required of those seeking doctoral degrees. Kijon Bloomfield (above), a Princeton graduate student in the Department of Religion, brings her own academic experiences to the program discussions. 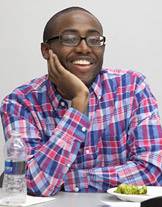 Eric Glover, a third-year Princeton graduate student in English, shares his story of how he came to study at Princeton.

For two years, Danielle Wiggins thought she had her future mapped out. During her freshman and sophomore years at Yale University, Wiggins thought she was destined to eventually apply to law school. It wasn't until her junior year that she realized she loved history and finally embraced her "secret ambition to be an academic."

This summer, Wiggins attended the Princeton Summer Undergraduate Research Experience (PSURE), a program run by the Graduate School for students interested in pursuing doctoral studies. Wiggins said she now can return to Yale knowing she's on the right path.

"I applied to PSURE so that I could assure myself that I wasn't making a mistake," Wiggins said. "Fortunately, the program has further confirmed that a career in academia is what I really want." 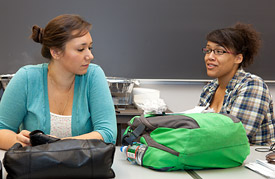 Nicole Perez (left), a sociology major from the University of California-Santa Barbara, and Molly Galloway, a sociology major from Grambling State University, share insights during a class session as part of the eight-week PSURE program. The full program includes research projects, a research seminar, lectures, group discussions and activities that teach the students about many aspects of graduate school, including workshops on the application process and financial aid, as well as a class designed to prepare them for the Graduate Record Examination.

PSURE lasts just eight weeks, but the benefits to the 14 participating college students from around the country are felt many years into the future. The annual program, which runs this year through Aug. 6, is designed for undergraduates who have completed their sophomore or junior years and who express a serious interest in pursuing a Ph.D. and a career in college or university teaching and research. Undergraduates who are underrepresented minorities, who are from socioeconomically disadvantaged backgrounds or who are from liberal arts colleges are especially encouraged to apply.

Research projects undertaken in a range of disciplines this year delve into race and politics, the interplay between neuroscience and computer science, the complexity of interfaith religious interactions, and the concept of literary protest, among other topics.

At the start of PSURE, students are matched with Princeton faculty, postdoctoral researchers and graduate students from myriad University departments. Over the course of two months, the undergraduates are mentored through research projects that illuminate the rigors and challenges of independent research required of those seeking doctoral degrees.

Additionally, PSURE includes a research seminar, lectures, group discussions and activities that teach the students about many aspects of graduate school, including workshops on the application process and financial aid, as well as a class designed to prepare them for the Graduate Record Examination. Students also practiced presenting their research at the annual symposium of the Leadership Alliance, a national consortium of student summer research programs held July 29-31 in Old Greenwich, Conn.

"PSURE is such an intellectually transformative experience. Our students are not only provided the opportunity to do work with preeminent scholars, but they also are able to take advantage of an immense array of resources while engaging in their independent research projects," said Karen Jackson-Weaver, associate dean for academic affairs and diversity in the Graduate School. Jackson-Weaver leads the PSURE program along with Elaine Willey, assistant dean for academic support programs.

"Our goal," continued Jackson-Weaver, "is to position these students for admission into the most competitive graduate school programs."

For Wiggins, the Yale undergraduate, the PSURE experience has been critical, she said, because "I wanted to prove to myself that a Ph.D. program was right for me." She has been mentored this summer by Kevin Kruse, a Princeton associate professor of history, who guided her through research focused on the relationship between the African American community and black Republicans in the Reagan administration. 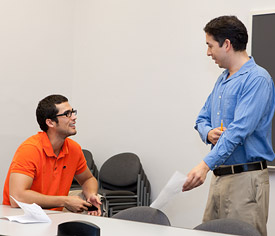 In addition to helping students affirm their certainty in taking the next step toward graduate school, PSURE also introduces the stringency and diligence required of graduate work through focused collaborations with professors and peers.

Monchette Gonda, a senior biology major from Stanford University, has spent her summer working beside Matthew Botvinick, an associate professor of psychology and the Princeton Neuroscience Institute. Gonda has assisted Botvinick and lab administrator Debbie Yee in experiments at the intersection of neuroscience, psychology and computer science, seeking to elucidate the computational and neural foundations of human behavior.

Gonda said that PSURE has not only illustrated that "the learning process can be tedious," but also how critical self-discipline is to the pursuit of a higher degree.

"I hadn't realized the level of commitment and work ethic required on a day-to-day basis in order to complete a Ph.D. in a timely manner," Gonda said. "Making one's own schedule can be difficult, and failing to stick to a schedule can result in a lot of delays in obtaining a degree." 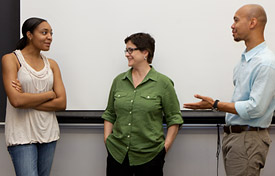 As an adviser, Botvinick said he values the eye-opening possibilities PSURE provides students.

"Doing research in these fields is obviously not for everyone, but what I want for my advisees is for them to really understand what this kind of work is like, and what opportunities lie open to them," he said. "Every once in a while there'll be a student who has that 'aha' experience, and that's what it's all about."

In addition, PSURE has compelled students to consider the career paths that may result from obtaining a Ph.D.

"The faculty has encouraged me to question the more practical aspects of my interest in graduate school," said Nathaniel Gonzalez, a senior sociology major from the University of Southern California. "For example, I've come to grapple with the question of whether I want to be called a sociologist when I receive my Ph.D. or a scholar of religion."

Gonzalez said he was also "hit with the reality of the job market," and that PSURE has allowed him to begin tailoring his career decisions in light of that realization. 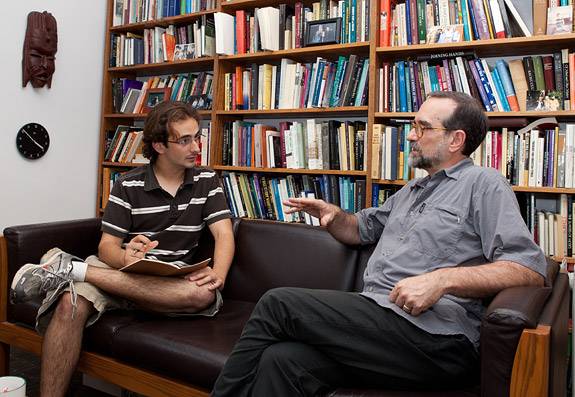 PSURE participant Nathaniel Gonzalez talks to his adviser Jeffrey Stout, a Princeton professor of religion. This summer, Gonzalez worked alongside Stout on an ethnographic study of an interfaith group on a U.S. campus whose meetings Gonzalez attended as a participant-observer.

This summer, Gonzalez has worked alongside Jeffrey Stout, a Princeton professor of religion, on an ethnographic study of an interfaith group on a U.S. campus whose meetings Gonzalez attended as a participant-observer. Through his observations, Gonzalez investigated what happens when young people from different religious traditions gather under an ecumenical umbrella on a highly diverse university campus. He also observed how they talk about their own traditions, how they avoid and manage potential conflicts over doctrine and morals, and what effects their interactions have on their conceptions of democratic citizenship.

Stout said he has sought to push Gonzalez's intellectual curiosity to a new level, encouraging him to question many of the assumptions he had taken on from existing scholarly literature on religion, reasoning and secularization. Additionally, Stout has tried to give Gonzalez "a sense of what it is to be held accountable for what you say and how you say it."

"I'm trying to give Nathan a sense of what lies beyond the horizon of the standard scholarship on his topic," Stout said. "I'm trying to draw him into a more active life of questioning than he has ever been exposed to before."

The PSURE program provides a forum for participants to discuss doing doctoral work in a range of academic disciplines. From left, Princeton graduate student panelists Rene Flores in sociology, Cory Hunter in music, Jessica Rowland in molecular biology and Matt Trujillo in psychology engage the group.

For Alexia Williams, a senior English major from Spelman College, PSURE has illustrated the value of interdisciplinary research across various academic interests. Under the mentorship of Daphne Brooks, a Princeton professor of English and African American studies, Williams studied how the composition and performance of Afro-Peruvian poetry can function as a means of peaceful protest, perhaps illuminating how marginalized communities can use poetry as a way of resisting discrimination in societies where other methods have not been successful.

"This kind of research requires collaborative efforts made by students and mentors across disciplines," Williams said. "At Princeton, professors and graduate students in English, Latin American studies and African American studies have been willing and eager to offer me advice and guidance in relation to my research project. The PSURE program has prepared me to enter graduate school, and eventually the professoriate, with confidence in my ability to cultivate ideas with members of the larger intellectual community."

Summer students take the next step toward graduate school