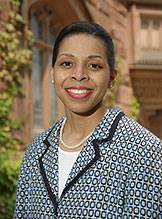 Karen Jackson-Weaver, Princeton University's associate dean for academics and diversity in the Office of the Dean of the Graduate School, was honored Jan. 21 with the Martin Luther King Day Journey Award, which recognizes efforts to continue the journey to achieve the civil rights leader's vision.

Jackson-Weaver, a 1994 Princeton alumna who joined the University administration in 2007, received the Journey Award for Special Achievement for helping to improve the recruitment of underrepresented minorities in the Graduate School and fostering a supportive environment that encourages students to succeed.

The awards were presented at the University's King Day ceremony in Richardson Auditorium of Alexander Hall. Members of the University community nominated candidates based on their support for King's philosophy and teachings and their contributions to the improvement of civil rights and/or human rights. Preference was given to candidates who have positively affected the University campus and/or community. Members of the MLK Day Committee judged the nominations, and Princeton President Shirley M. Tilghman selected the finalists for the awards, which were instituted in 2005.

"Karen is as empathetic as she is savvy when it comes to helping young scholars navigate the demanding and, for some, disorienting world of graduate school. She is a valued mentor, who has touched and sometimes redirected lives, but she has also been instrumental in creating and strengthening structures — such as the Graduate Women of Color Caucus or the Diversity Fellows program — that have themselves been sources of empowerment," Tilghman said in presenting the award.

She added, "In working with our graduate students before, during and after their time at Princeton — especially those who are, in one way or another, disadvantaged — her chief concern is to bring out the best in them while demanding the best of us as a University."

Since Jackson-Weaver joined the Graduate School, applications and yield for underrepresented minorities have grown and outpaced total applications and yield for all domestic students, Dean of the Graduate School William Russel wrote in nominating Jackson-Weaver for the award. In addition, she has worked with academic departments across the University to recruit students, and to retain students through mentoring, supporting student groups, and organizing programming.

"Growth in academic and social activities for minority students has transformed the spirit on campus and spawned similar professional development programming for the full graduate student body," Russel wrote. "Karen is a born leader with a passion for advancing diversity."

Another supporter of Jackson-Weaver's nomination was Marta Tienda, Princeton's Maurice P. During Professor in Demographic Studies. Tienda is also a professor of sociology and public affairs in the Woodrow Wilson School of Public and International Affairs and director of the Program in Latino Studies, and she shared several examples of Jackson-Weaver's leadership and dedication to graduate students on campus.

"I have observed Dean Karen devote tireless hours with Latino graduate students so that their annual academic conference, Voz Latina, flourishes," Tienda wrote. In addition to working with the students to plan the events and to provide logistical support, she encouraged faculty to participate, she added.

"On the conference days, Dean Karen attends the events from opening to close (often with her children in tow); her presence conveys a pillar of strength to the less-experienced students," Tienda wrote.

Diana Hill, who earned her Ph.D. in psychology at Princeton in 2010, credited Jackson-Weaver for encouraging her to return to campus after a three-year absence. Hill is now an assistant dean and director of the Pre-Graduate Program at Washington University, identifying and encouraging future graduate students there.

"Dean Weaver changed my life," Hill wrote. "She told me that I belonged at Princeton, that I should finish, and that she would walk with me through my journey. …I wanted to learn from her and be someone else's Dean Weaver."

Jackson-Weaver is also a lecturer in the Program in Gender and Sexuality Studies. Her current research explores women's leadership roles in sacred contexts and gender dynamics within the civil rights movement. During her tenure at Princeton, she has taught the seminar "Women's Leadership in Modern America" and this spring she will be teaching a new course, "The African American Prophetic Tradition." Recently, Jackson-Weaver was selected to be the series editor of the Oxford University and American Academy of Religion "Teaching Religious Studies" series.

Jackson-Weaver came to Princeton after serving as the executive director of the Amistad Commission within the New Jersey Department of State. She oversaw statewide implementation of the Amistad mandate, which requires New Jersey's public schools to integrate African American history into the K-12 curriculum. Under her administration, the commission was featured in media outlets such as CNN News, The New York Times, The Washington Post, Black Enterprise, Newsweek, Forbes and CBS News for its innovative approach to integrating African American history into the social studies curriculum in New Jersey's public schools. In addition, she edited two volumes of primary source documents that resulted in the publications "Reconstruction Reconsidered: The African-American Presence in American History" and the "Amistad Curricular Guide to American History."

Between 1997 and 2004, she was a research fellow at Columbia's Institute for Research in African American Studies and helped establish a quarterly publication, Souls: A Critical Journal of Black Politics, Culture and Society, for which she served as senior associate editor from 1998 to 2000. In addition to earning her bachelor's degree in history from Princeton, Jackson-Weaver received a specialized master's degree of education from Harvard University, and two master's degrees and a Ph.D. in U.S. history from Columbia University, where she was a Kluge Scholar Fellow, Merit Dissertation winner and nominee for the universitywide teaching award.

Weaver to head diversity efforts in the Graduate School