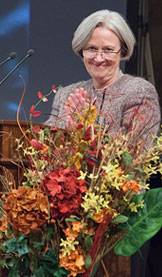 Princeton President Shirley M. Tilghman speaks at the University's annual Martin Luther King Jr. Day celebration on Jan. 21 in Richardson Auditorium. Noting the event took place on the same day as the inauguration of President Barack Obama, Tilghman said "His re-election confirms that we as a people can transcend the legacy of racial prejudice."

At Princeton University's annual King Day celebration Jan. 21, Professor of English and African American studies Anne Cheng honored the 50th anniversary of Dr. Martin Luther King's famous "I Have a Dream" speech from 1963. Cheng, a native of Taiwan, shared her own personal view of "living with difference."

"When Dr. Martin Luther King, Jr. was giving his 'I Have A Dream' speech, I was an infant halfway across the world," Cheng said. "If someone had told me or my parents that this speech would have a powerful impact on our lives we probably would have been skeptical. Yet Dr. King's life work has become a guidepost behind much of why I do what I do today and how I think of myself as a social being," Cheng told an audience of more than 200 schoolchildren, University community members and the public in Richardson Auditorium.

Some of the children had participated in this year's annual literary, video and visual arts contest, which challenged them to propose ways to overcome assumptions about identity and to foster inclusion. Winners were announced during the event. Three are participants in the Princeton University Preparatory Program, which supports high-achieving, low-income students from local districts. 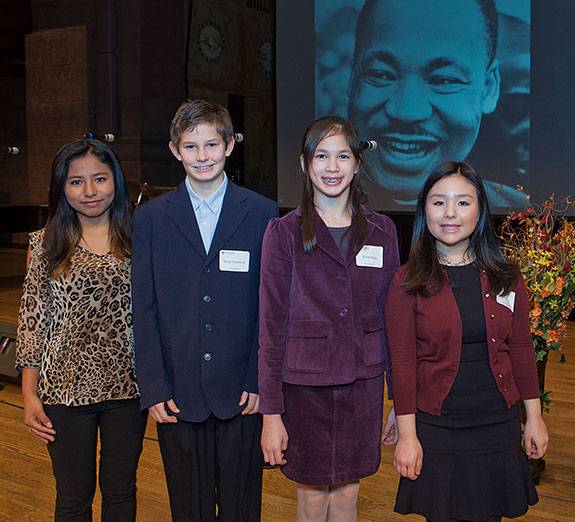 Cheng's keynote speech focused on racial indifference. She encouraged the audience to "celebrate Dr. King not only for his inspiring vision but also for the challenges that vision continues to pose for America. I am here to suggest that … we should not be timid about confronting the gifts and failures of American diversity."

Cheng said her first encounters with diversity began as a child, when she arrived in America as a 12-year-old immigrant in Savannah, Ga.

"The day after I arrived, I was sent immediately to an American school that had never had an Asian American student, much less an Asian one," she said. "Believe me, there were plenty of reasons why I did not fit in. Nobody talked about racial or gender difference. But, even in that small slice of the world, the people and books that I was drawn to clearly showed that … I was already trying to work through what American diversity means." 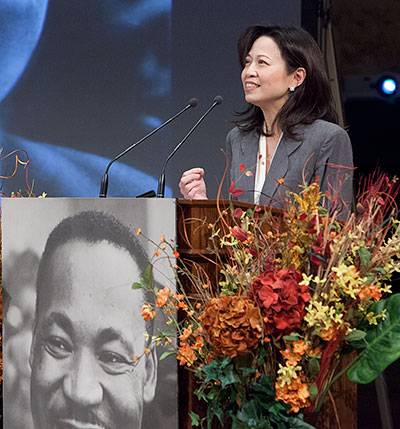 Keynote speaker Anne Cheng, a professor of English and African American studies at Princeton, spoke about racial indifference. "The real test of democracy is not how to find yourself in another person, but how to acknowledge the other even when, or especially when, that other's interest does not reflect your own."

Cheng specializes in race studies and psychoanalytic theory and works in 20th-century American literature, with special focus on Asian American and African American literature. A 1985 Princeton graduate who earned her master's in English and creative writing from Stanford University and her Ph.D. in comparative literature from the University of California-Berkeley, Cheng is also affiliated with the Program in American Studies and the Program in Gender and Sexuality Studies.

Quoting Dr. King's famous observation that "all life is interrelated" and "whatever affects one directly affects all indirectly," Cheng challenged the audience "to pause, reflect and give yourselves the permission — and the patience — to entertain ambivalences and contradictions rather than moving quickly to easy identities and solutions."

"The real test of democracy is not how to find yourself in another person, but how to acknowledge the other even when, or especially when, that other's interest does not reflect your own." 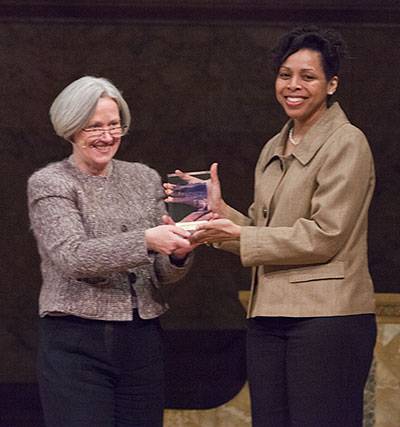 Tilghman presents Karen Jackson-Weaver, associate dean for academics and diversity, Office of the Dean of the Graduate School, and lecturer in the Program in Gender and Sexuality Studies, with the MLK Day Journey Award for Special Achievement for her work with underrepresented graduate students.

Princeton President Shirley M. Tilghman noted in introductory remarks that the celebration coincided with President Barack Obama's inauguration for his second term as president of the United States, eliciting applause from the audience. "His re-election confirms that we as a people can transcend the legacy of racial prejudice that denied to black Americans what Dr. King described as 'the riches of freedom and the security of justice.' National leadership has ceased to be the preserve of one race," Tilghman said.

"As the theme of this year's contest reminds us, we continue to assign to others and to ourselves identities that mask our common humanity," said Tilghman. Using a scientific reference, she added, "Now, as a molecular biologist, I might frame the issue, we can either chose to focus on the 99.9 percent of the DNA in our genomes that is identical between individuals, or we can choose to focus on the 0.1 percent that is different."

This year's event also featured the presentation of the MLK Day Journey Award for Special Achievement, which recognizes efforts to continue the journey to achieve Martin Luther King Jr.'s vision. Karen Jackson-Weaver, associate dean for academics and diversity, Office of the Dean of the Graduate School, and lecturer in the Program in Gender and Sexuality Studies, received the award for her role in improving the recruitment, retention and completion rates for underrepresented graduate students.

In presenting the award to Jackson-Weaver, a 1994 Princeton alumna, Tilghman said: "For Karen, diversity is not primarily measured in statistics but in the well-being of individuals. In working with our graduate students before, during and after their time at Princeton, her chief concern is to bring out the best in them while demanding the best of us as a University."
The gospel choir from Arts High School in Newark, N.J., also performed at the ceremony.

A webcast of the event will be archived on the WebMedia site. 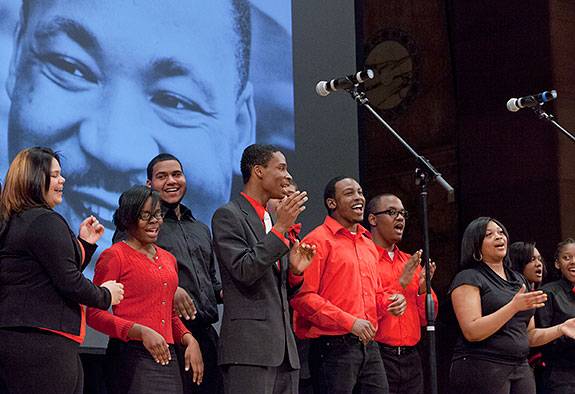 The gospel choir from Arts High School in Newark, N.J., performed at the ceremony.