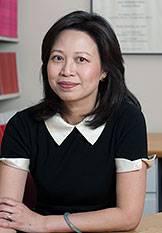 Princeton University will commemorate the legacy of Martin Luther King Jr. with its annual King Day celebration on Monday, Jan. 21, in Richardson Auditorium of Alexander Hall. Doors open at 1 p.m. The keynote address will be delivered by Anne Cheng, professor of English and African American studies and a Princeton alumna.

The ceremony will include the presentation of awards to student winners in grades 4 through 12 from area schools who entered an annual Martin Luther King Day-themed contests in literary arts, visual arts and video categories. Marking the 50th anniversary of the famous "I Have a Dream" speech, which King gave in front of the Lincoln Memorial in Washington, D.C., on August 28, 1963, this year's contests focus on the question: How can we overcome assumptions about identity and foster inclusion? Students were asked to identify a personal characteristic or trait that might cause some to make assumptions and others to feel isolated, and propose ways in which individuals can take action to overcome differences and foster inclusion.

Cheng, the keynote speaker, specializes in race studies and psychoanalytic theory and works in 20th-century American literature, with special focus on Asian American and African American literature. In spring 2013, she is co-teaching a new interdisciplinary course, "America Then and Now," and "Literature and Food." She has also taught courses that examine various aspects of modernism and topics in American literary and cinematic narratives. She is the author of "The Melancholy of Race: Assimilation, Psychoanalysis and Hidden Grief," and "Second Skin: Josephine Baker and the Modern Surface."

Cheng, a 1985 Princeton graduate who earned her master's in English and creative writing from Stanford University and her Ph.D. in comparative literature from the University of California-Berkeley, is also affiliated with the Program in American Studies and the Program in Gender and Sexuality Studies. She is the founder of the public conversation series Critical Encounters, which encourages dialogue across diverse disciplines on shared topics of social justice.