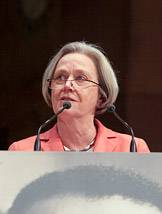 Princeton President Shirley M. Tilghman speaks at the University's annual Martin Luther King Jr. Day celebration on Jan. 16 in Richardson Auditorium. This year's event focused on the importance of education as a foundation for success throughout life. In her introductory remarks, Tilghman said the King Day holiday can be a "time to rededicate ourselves to the challenge of creating a more equitable and humane society."

"We need a constitutional amendment that says every child in this country is entitled to a quality public school education," said Moses, the 2011-12 distinguished fellow in Princeton's Center for African American Studies.

This year's King Day event focused on the importance of education as a foundation for success throughout life. Speakers noted that widening economic gaps and other social disparities have led to failing public schools, high dropout rates and educational inequalities across the country.

Forgoing the traditional keynote speech, Moses gave a civics lesson of sorts, turning Richardson Auditorium into his classroom and the audience of about 400 local schoolchildren, University community members and the public into his pupils.

Keynote speaker Bob Moses leads students at the King Day celebration in a recitation of the preamble to the U.S. Constitution. Moses, a civil rights leader and educator, said young people should use the Constitution to ensure educational equality in America.

Standing shoulder-to-shoulder across the stage, more than 90 students — from preschoolers to teenagers — followed Moses in a recitation of the preamble to the Constitution.

"We the people of the United States, in order to form a more perfect union," Moses said, standing in front of the group like a conductor.

"We the people …," the children repeated as Moses lifted their voices louder. 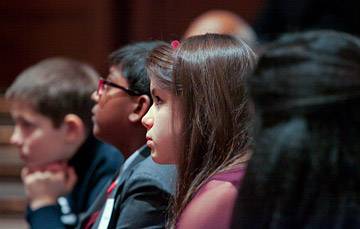 The ceremony's theme for supporting equality in education is an idea that Moses has championed as founder and director of the Algebra Project. The national nonprofit organization has helped thousands of students in urban and rural school districts develop essential mathematical skills.

Moses said it is "we the people" and "people all over the world" who have the power to enact change.

Moses, who will co-teach a course at Princeton this spring focusing on education and labor policies through the lens of race, was a leader in the 1960s civil rights movement and served as a key figure in the Mississippi Summer Project of 1964 to register black voters and protest racial discrimination. He said his generation must now hand off its work. 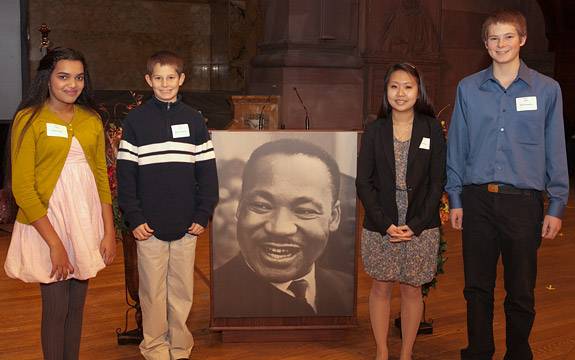 In her introductory remarks, Princeton President Shirley M. Tilghman said the annual King Day event is more than a national holiday for people such as Moses who toiled for racial justice and equality in the 1950s and 1960s.

"For these men and women, Martin Luther King Jr. Day is not so much a time to commemorate the achievements of half a century ago, profoundly important as they were, as it is a time to rededicate ourselves to the challenge of creating a more equitable and humane society," Tilghman said.

LEFT: Debra Bazarsky (left), director of Princeton's Lesbian, Gay, Bisexual, Transgender Center, congratulates senior Sandra Mukasa after presenting her with the MLK Day Journey Award for Special Achievement for her work in improving the Princeton community for students. RIGHT: Tilghman shakes hands with Miguel Centeno, a professor of sociology and international affairs, before presenting him with the Journey Award for Lifetime Service for his role in co-founding the Princeton University Preparatory Program.

The ceremony also dovetailed with this year's 55th anniversary of the landmark desegregation of Central High School in Little Rock, Ark., by youngsters known as the Little Rock Nine. Students from area schools addressed the education theme through literary arts, visual arts and video contests in which they proposed ways to address disparity in educational access and encourage academic excellence.

"As the theme for this year's literary, video and visual arts contest reminds us, nowhere is the American dream of equal opportunity more frayed than in our nation's public schools; indeed, in the words of Secretary of Education Arne Duncan, which echoed Dr. King's own words, 'Education is … the civil rights issue of our generation,'" Tilghman said. 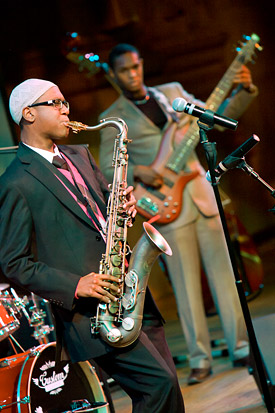 This year's event also featured the presentation of the MLK Day Journey Awards, which recognize efforts to continue the journey to achieve Martin Luther King Jr.'s vision. Miguel Centeno, a professor of sociology and international affairs, received the Journey Award for Lifetime Service for his role in helping provide disadvantaged students with the skills they need to apply and succeed at selective colleges and universities. Sandra Mukasa, a member of the Class of 2012, received the Journey Award for Special Achievement for her work improving the Princeton community for women, students of color, and lesbian, gay, bisexual and transgender students.

A New Perspective Jazz Band, a youth quartet from Ewing, N.J., also performed at the ceremony.

A webcast of the event will be archived on the WebMedia site.