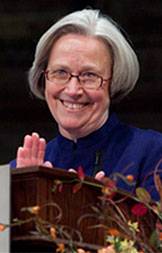 In introductory remarks at the University's annual Martin Luther King Jr. Day celebration Jan. 17, Princeton President Shirley M. Tilghman emphasizes that today's young generation has a responsibility to use technological advances for the greater good. The King Day ceremony focused on exploring the environmental impact of Hurricane Katrina and the BP Deepwater Horizon oil spill in the Gulf Coast region, in the context of King's vision for equality and his concern for the poor and oppressed.

This year's event focused on exploring the environmental impact of Hurricane Katrina and the BP Deepwater Horizon oil spill in the Gulf Coast region, in the context of King's vision for equality and his concern for the poor and oppressed. The theme was addressed in literary arts, visual arts and video contests for students from area schools. Jones, an environmental activist who is a visiting fellow at Princeton, pointed to the student contest winners who were honored at the ceremony as examples of a generation that holds the power to realize King's vision.

"You are the most technologically savvy and sophisticated generation of Americans that we have ever had. Many of you don't know how much power you possess," Jones said. He implored young Americans to "stop using this technology as toys and start using it as tools to connect your generation globally."

Noting that he was born in 1968, the year King was assassinated, Jones said, "It took 40 years for hope to become a mass phenomenon again in America. … Hope is a renewable resource, but it comes back in very long arcs. You happen to be alive at a time when hope is being reborn in your country. And thank goodness you're here, because the challenges now are as great, if not greater, than they were when Dr. King was a young man."

Jones, a former adviser to the Obama administration on green jobs and innovation, holds a joint appointment at Princeton's Center for African American Studies and Program in Science, Technology and Environmental Policy in the Woodrow Wilson School of Public and International Affairs. He told the campus and community members in attendance at the King Day ceremony that America's reliance on fossil fuels must end in order to avoid disasters such as the BP oil spill and other environmental catastrophes. 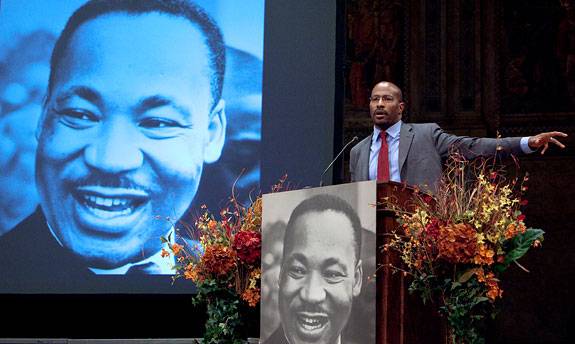 Keynote speaker Van Jones, an environmental activist who is a visiting fellow at Princeton, exhorts young members of the King Day audience to embrace the challenge of preserving America's future by using their technological skills and by promoting environmental sustainability.

Addressing the students, he said, "The question is: Can your generation insist that our society stop drilling those holes at some point?"

He stressed the need for a "broader portfolio of energy and employment options in our country, because America's future is not down those holes. … If you want to see the future, look at the living sun … look at the wind."

Devastating events such Katrina and the BP oil spill show the need for change both in environmental policy and in how the underprivileged are treated in America, Jones said.

"You have some warning signs, bequeathed to you by my generation, that our present trajectory is inadequate and dangerous," he said.

"If you want to bring forward Dr. King's view, you have to be the generation that says: 'Never again. Not on our watch. We don't let the poor sink or swim in this country when catastrophes come. We don't turn on each other -- we turn to each other. We are all in this together.'" 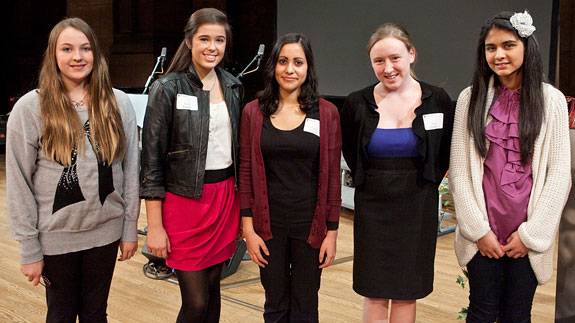 "While technology has given us unprecedented power to both span and shape the world, until we exercise this power in a spirit of mutual responsibility, racism and poverty will continue to divide us, our global environment will suffer, and those who have the least will lose the most when disaster strikes," Tilghman said.

Acknowledging the student winners, Tilghman said, "As the compelling entries in this year's contest remind us, we must protect the global environment as if it were our own backyard, because it is. The environmental welfare of our planet -- and the well-being of future generations -- calls for precisely the kind of solidarity that Dr. King championed." 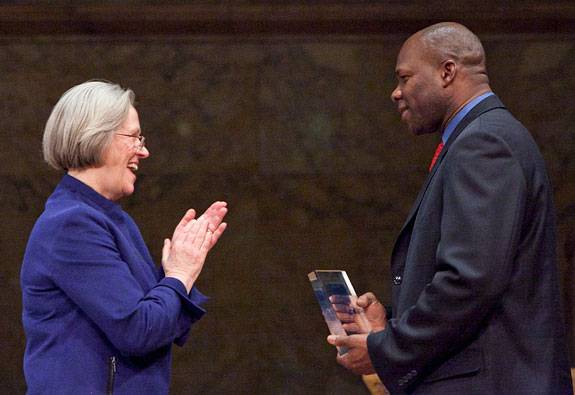 Tilghman presents the MLK Day Journey Award for Special Achievement to Josue Lajeunesse, a University janitor who works to bring clean drinking water to his family's village in Haiti.

The ceremony included the presentation of the MLK Day Journey Awards, which recognize efforts to continue the journey to achieve Martin Luther King Jr.'s vision. Thomas Parker, a mail carrier who has worked at the University since 1979, received the Journey Award for Lifetime Service for his role as an advocate and adviser to co-workers and for his dedication to community service. Josue Lajeunesse, a janitor who has been at Princeton since 1995, received the Journey Award for Special Achievement for his work to bring clean drinking water to his family's village in Haiti. 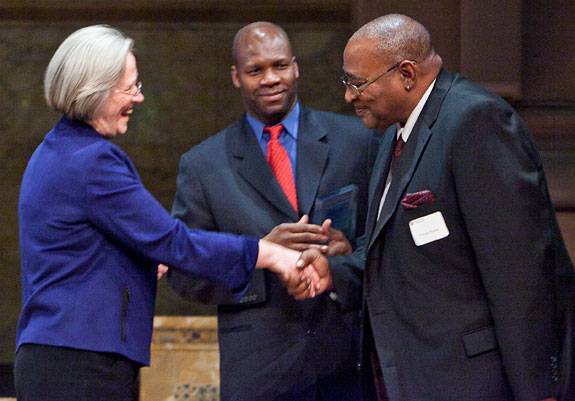 Thomas Parker, a University mail carrier who has been involved in many efforts to serve the campus and local communities, receives the Journey Award for Lifetime Service from Tilghman as Lajeunesse looks on.

The event also featured musical selections from One Voice-Trenton Children's Chorus and Westminster Conservatory Cantus and from soloist Rochelle Ellis.

A webcast of the event will be archived on the Webmedia site. 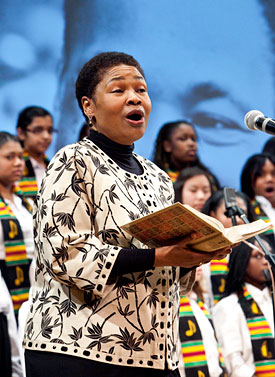 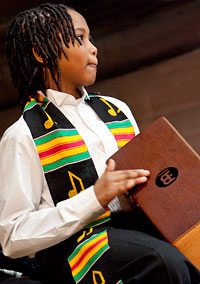 A member of the children's chorus performs at the King Day ceremony.