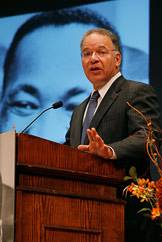 Hugh Price, the John Weinberg/Goldman Sachs Visiting Professor of Public and International Affairs in the Woodrow Wilson School of Public and International Affairs, delivered the keynote address at the University's annual Martin Luther King Jr. Day celebration Jan. 19 in Richardson Auditorium of Alexander Hall. Price, the former head of the National Urban League, spoke on the theme of this year's program, which followed the presidential election and asked, "If he were alive today, what would Dr. King most want our newly elected president to be concerned about?"

While Barack Obama's election as the first African American U.S. president marks an unprecedented step in realizing Martin Luther King Jr.'s dream, scholar and activist Hugh Price told an audience today at Princeton University's annual King Day celebration that much work remains to be done to fulfill the vision of an American society in which people of all backgrounds thrive. 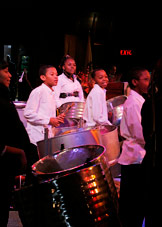 Price, a visiting professor in Princeton's Woodrow Wilson School of Public and International Affairs and the former head of the National Urban League, urged African Americans and other minorities to take personal responsibility in facing the challenges that remain in their communities.

"With the election and inauguration of Barack Obama, we can proclaim that the freedom revolution of the 19th century and the equality revolution of the 20th century are triumphant," he said. "And if this were a fairy tale, we could celebrate Obama's inauguration tomorrow and then live happily ever after. But life isn't a fairy tale, and America's 'more perfect union' remains a work in progress. There is so much unfinished business when it comes to moving African Americans, Latinos and others in this country into the American mainstream." 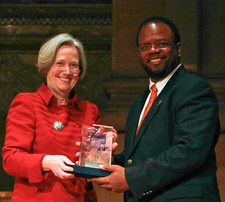 Campus and local community members gathered in Richardson Auditorium of Alexander Hall to join in the King Day celebration. In addition to Price's keynote address, students from area schools were honored for submissions to an essay, poster and video contest reflecting the theme of this year's ceremony: to consider the issues about which King would want America's new president to be most concerned. The event also included the presentation of MLK Day Journey Award for Lifetime Service, which recognizes efforts to continue the journey to achieve King's vision for America, to Princeton engineering professor William Massey for his work mentoring underrepresented minorities in the fields of science and technology.

In opening remarks, Princeton President Shirley M. Tilghman reflected on Obama's historic rise to the White House. "A man who, at the time of his birth in 1961, would have been refused food and lodging because of the color of his skin in many places in this country will occupy the most famous house in America together with his wife -- and we are so proud to say, Princeton alumna -- Michelle Robinson Obama and their lovely daughters, Sasha and Malia. ... On election night 2008, the ultimate color line was broken, and our nation happily will never be the same again."

She added, "Whatever our political beliefs, we can join our fellow citizens and men and women throughout the world in celebrating a moment that Dr. King did so much to bring about and would, I know, have invoked in him the same tears of joy that were evident on the faces of so many on the evening of Nov. 4. Yet I also suspect that even amid this week's festivities, Dr. King would have paused to remind us that his work remains unfinished and that, for many Americans, the 'promised land' remains elusive and justice and inequality still exist."

Price said Obama's election brought back memories of two historic events he witnessed firsthand: the March on Washington in 1963, in which King delivered his famed "I Have a Dream" speech, and the declaration of the end of apartheid in South Africa and the release of Nelson Mandela in 1990. It also raised the specter of members of Price's own family who fought for equal rights, from his great-great-great-grandfather's service under George Washington in the Revolutionary War to his great-great-grandfather's escape from slavery in the 19th century to his parents' championing of voting rights for African Americans in the 20th century.

With Obama's election, however, Price cautioned that African Americans must not rely on "charismatic leaders" but rather take personal responsibility to achieve King's dream and surmount problems that continue in their community, citing areas such as education, health, poverty and early parenthood.

The Oasis ensemble performs on the steel pan, a musical instrument developed in the Caribbean islands of Trinidad and Tobago. (Photo: Denise Applewhite)

"We must not bank on the federal cavalry coming to the rescue of African Americans even with Barack Obama as commander in chief," he said. "I am as euphoric as anyone over the election of Barack Obama. But euphoria isn't an agenda for progress. We have the work still ahead of us of lifting our children and lifting our families out of poverty. ... I believe that in the African American community we must also be clear-eyed and pragmatic, and not misty-eyed and giddy, about the game plan we need in the 21st century. That game plan is to mount the third great revolution in the annals of the African American community, and that is what I call the development revolution.

"For me, the goal is to unleash the potential of all of our children. ... We must recognize that responsibility is the essence of the soul, and the launch pad for the development revolution isn't a government program. It must build on the deep-seated values and aspirations of our people, which starts with responsibility," Price said.

"The more responsibility that we assume, the easier the job will be for Barack Obama. It is a mistake to wait for the next Martin to part the waters or procrastinate waiting for Obama to lead us to the American mainstream. In order to drive this development revolution forward, we the people must muster the will, marshal the resources, chart the course and assume lead responsibility for our own progress," Price said.

The King Day event also featured performances by the Oasis Youth Steel Pan Ensemble of Newark. A Webcast of the event will be archived on the Webmedia site.