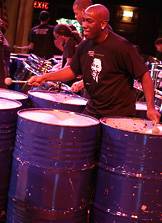 Below left: José Huizar, a Princeton trustee and graduate alumnus who is the first Latino immigrant to serve as a member of the Los Angeles City Council, delivered the keynote address on the theme of the event, which was immigration.


Third below left: From left, Princeton President Shirley M. Tilghman presented MLK Day Journey Awards to John Templeton, assistant dean for graduate admissions in the Woodrow Wilson School of Public and International Affairs, and Anna Almore, a member of the class of 2008. The awards recognize efforts to continue the journey to achieve Martin Luther King Jr.'s vision for America.


Bottom left: It was CASYM's fifth appearance at a Princeton MLK Day celebration.

José Huizar, a University trustee and graduate alumnus who is the first Latino immigrant to serve as a member of the Los Angeles City Council, delivered the keynote address. He reflected on how King's message of equality applies to the current political dispute over U.S. immigration laws, which shares many of the same issues at the center of the civil rights movement of the 1960s.

"Both journeys are really one," Huizar said. "They seek to expand the dignity of human rights. They are motivated by the desire for equal opportunity. They embrace justice. But most importantly, they fulfill the need to make a better life for oneself."

Also during the ceremony, students from area schools were honored for submissions to an essay, poster and video contest in which they considered how King might have participated in today's immigration debate. In addition, John Templeton, assistant dean for graduate admissions in the Woodrow Wilson School of Public and International Affairs, and senior Anna Almore were presented with the University's MLK Day Journey Awards, which recognize efforts to continue the journey to achieve King's vision for America.

In opening remarks, Princeton President Shirley M. Tilghman said, "In the rancorous public debate over immigration ... I find myself asking what Dr. King would be saying today. And while none of us can know for sure, I like to think that he would remind us that while the undocumented may be 'aliens' in a legal sense, they are also our brothers and sisters and, as such, should never be exploited by those who need their labor or demonized by those who don't.

"And so, as we mark this day," Tilghman said, "let us bear in mind that the message of Dr. King is a timeless one, as relevant in 2008 as it was when he began his journey to the 'promised land.'" 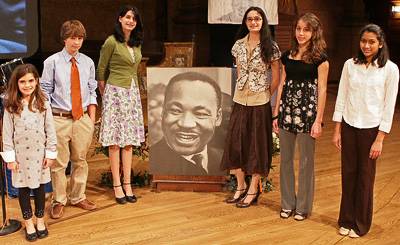 Keynote speaker Huizar, who earned a master's degree in public affairs and urban and regional planning from the Woodrow Wilson School of Public and International Affairs in 1994, was born in Zacatecas, Mexico, and raised in Los Angeles. Huizar noted that recent immigrant rights marches in the city were "directly inspired by Dr. King's call for nonviolent action."

"Collectively, millions of people marched peacefully in the name of immigration rights and were among the largest demonstrations our nation has ever seen. More importantly, they have helped make the problems caused by our immigration policies more recognizable to the rest of America," he said.

Violent responses to these protests "brought back the stark black-and-white television images of the '60s that we've all seen," Huizar said. While America has made great strides in equal opportunity since King's death 40 years ago, Huizar stressed that work still needs to be done to achieve King's vision -- for all minorities.

"Today it is often said that reforming education in America is the civil rights issue of our time," he said. "So we must improve our educational system and close the disparities we see in many sectors of our society. But it will take African American and immigrant communities and others marching side by side in the fight for their common goals. They should be united by the desire to make this the promised land."

Noting that King worked hard to unite blacks and Latinos, Huizar said, "The struggles of immigrants and African Americans are very similar indeed. I truly believe that they can and should be working together to build our communities up, not tearing each other down. As our nation continues a national debate on immigration, I say that we raise our voices and lift our sights. We need a debate that attacks the issue without attacking individuals."

Describing his own family's journey to the United States, Huizar said, "Like many other immigrants, I have benefited directly from the laws inspired by Dr. King -- not only his words, but his actions. ... Because I was allowed to come to the United States, I have had the opportunity to pursue an education at some incredible schools, including Princeton University. I was able to grow up in a society that was profoundly shaped by Dr. King, one that is built on pillars of justice, equality and opportunity." 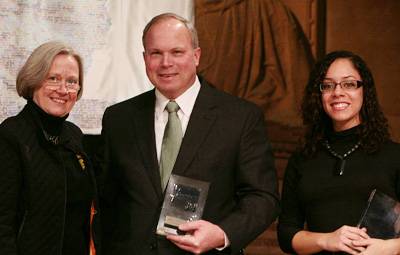 Huizar urged the audience to be aware of the struggles of King and others who have fought for equality, and to continue their work.

"Let us take that awareness and use it to encourage reform and wipe out injustice," he said. "Let us make sure this land truly holds a promise that draws immigrants from around the world. Let us demand an educational system that will allow every child to reach the mountaintop. And let us work hard to unite all of us, no matter what our background may be, and let us pursue that journey that Dr. King began to pave."

The event also featured lively performances by the CASYM Steel Orchestra of New York, making its fifth appearance at Princeton's King Day celebration. A Webcast of the event will be archived on the Webmedia site.