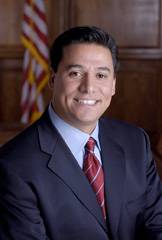 Princeton will commemorate the legacy of Martin Luther King Jr. with its annual King Day celebration Monday, Jan. 21, in Richardson Auditorium of Alexander Hall. The event, which is free and open to the public, will start with musical selections at 1 p.m. followed by the program at 1:30 p.m.

The theme of this year's program is immigration, a hotly debated topic today that is relevant to King given his concern for humanity. The keynote address will be delivered by José Huizar, a Princeton trustee and graduate alumnus who is the first Latino immigrant to serve as a member of the Los Angeles City Council.

The event will include the presentation of awards to essay, poster and video contest winners in grades 4 through 12 from area schools, who submitted entries reflecting their views on how King might have participated in today's immigration debate.

In addition, the University will present the MLK Day Journey Award, recognizing a member of the Princeton faculty, staff or student body who best represents King's continued journey. The event also will include a performance by the CASYM Steel Orchestra of New York.

Huizar earned his master's in public affairs and urban and regional planning from Princeton's Woodrow Wilson School of Public and International Affairs in 1994. He was named to the University's Board of Trustees in 2005, the same year he was elected to the Los Angeles City Council. As a City Council member, Huizar's focus has included enhancing public safety, strengthening education and youth programs, and building more affordable housing and public transportation.

Previously, Huizar served two terms as president of the board of education for the Los Angeles Unified School District. During his tenure, he oversaw plans to build more than 160 new schools within eight years, the largest school construction program in the nation's history. He also led a successful effort to reform the high school curriculum to ensure that all students, regardless of their backgrounds, will complete courses required for admission to one of California's public universities.

Huizar, who was born in Zacatecas, Mexico, and raised in Los Angeles, has received numerous awards and distinctions, including being named one of the 100 most influential Hispanics in America by Hispanic Business magazine. He previously served as a deputy city attorney in the Real Estate and Environmental Division of the Los Angeles City Attorney's Office and as an associate with several private law firms.

The names of the essay, poster and video contest winners will be posted on the University's King Day website, along with images of the posters and excerpts from the essays. Many of the posters also will be displayed during the program.

The event will be webcast live. It is convened by the University's Martin Luther King Day Committee and is coordinated by the Office of Communications and the Office of the Vice Provost for Institutional Equity and Diversity.