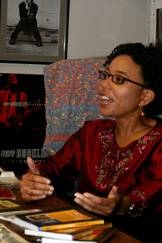 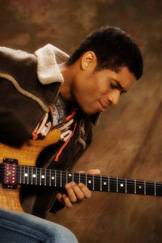 The University will commemorate the legacy of Martin Luther King Jr. with its annual King Day celebration at 1 p.m. Monday, Jan. 15, in Richardson Auditorium of Alexander Hall.

This year's event, which is free and open to the public, will focus on the music of human rights movements. Participants will include: Daphne Brooks, associate professor of English and African American studies at Princeton, who will give an address; jazz guitarist Stanley Jordan, a member of Princeton's class of 1981, who will perform; and a combined group representing the Trenton Children's Chorus Covenant Singers and the Princeton Day School seventh- and eighth-grade choir, which also will perform.

In addition, the event will include the presentation of awards to essay, poster and video contest winners in grades 4 through 12 from area schools, who submitted entries based on the musical theme.

"From the piano in his childhood home in Atlanta to the titles of sermons and speeches, music heavily influenced Dr. King and aided him in his ability to move others," said Lauren Robinson-Brown, director of communications at Princeton and convener of the University's Martin Luther King Day Committee. "Dr. King longed to realize the harmony that can be achieved in music. He often invoked musical terminology or turned to song lyrics to underscore key messages. The healing and empowering mechanisms related to music are being explored now more than ever."

Brooks, a faculty member since 2001, specializes in topics including African American literature and culture, performance studies and popular music culture. She is the author of two books: "Bodies in Dissent: Spectacular Performances of Race and Freedom, 1850-1910," which describes how black activists, actors, singers and other entertainers frequently transformed the alienating conditions of social and political marginalization into modes of self-actualization through performance; and "Jeff Buckley's Grace," which explores the life and music of a white rock musician whose sudden death in 1997 ended a short but acclaimed career.

Jordan became a street musician in New York, Philadelphia and other cities after earning a bachelor's degree in music from Princeton. He was signed by Blue Note Records in 1985 and produced an innovative jazz album titled "Magic Touch" that topped the Billboard Jazz Chart for 51 weeks and earned him two Grammy nominations. He has since produced several other albums, including "Cornucopia," "Stolen Moments" and "Bolero." Jordan is known for his mastery of a special "tapping" technique on the guitar's fret board that allows him to achieve a level of orchestral complexity equaling that of a keyboard instrument. He returned to campus this fall to perform during the "Coming Back and Looking Forward" conference sponsored by the University in partnership with the Association of Black Princeton Alumni.

The names of the essay, poster and video contest winners have been posted on the University's King Day website, along with images of the posters and excerpts from the essays. Many of the posters also will be displayed during the program.

The event will be webcast live. It is convened by the University's Martin Luther King Day Committee and is coordinated by the Office of Communications.