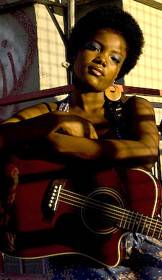 Princeton will commemorate the legacy of Martin Luther King Jr. with its annual King Day celebration Monday, Jan. 18, in Richardson Auditorium of Alexander Hall. The event, which is free and open to the public, will start with musical selections at 1 p.m.

Tricia Rose, a scholar of modern African American culture and chair of the Department of Africana Studies at Brown University, will deliver the keynote address.

The event will include the presentation of awards to literary, visual arts and video contest winners in grades 4 through 12 from area schools. Students were instructed to consider social or economic policies that result in inequitable treatment and were asked, "What creative insight or original work can you present that transforms the consciousness of American citizens, champions Dr. King's dream for a society that is structurally and morally just, and furthers the idea of equality that is embedded in the ideals of the American dream?"

During the program the University will present the MLK Day Journey Award, which recognizes a member of the Princeton faculty, staff or student body who best represents King's continued journey. The event also will include a performance by Lynette Williams, a singer and songwriter from Ridgewood, N.J., whose sound is a mixture of soul, pop, blues, rock, folk and jazz.

Rose, the keynote speaker, specializes in 20th-century African American culture and politics, social thought, popular culture and gender issues. She is the author of "Black Noise: Rap Music and Black Culture in Contemporary America" and "Longing to Tell: Black Women Talk About Sexuality and Intimacy." "Black Noise" won several awards, including an American Book Award from the Before Columbus Foundation. A central facet of Rose's work reflects a deep interest in examining the current legacies of racial and other forms of structural relations and exploring the creative and visionary strategies developed by artists, communities and movements to build a more just society.

The King Day event will be webcast live. It is convened by the University's Martin Luther King Day Committee and is coordinated by the Office of the Provost and the Office of Human Resources.