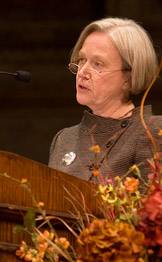 In introductory remarks at the University's annual Martin Luther King Jr. Day celebration Jan. 18, Princeton President Shirley M. Tilghman told the audience to heed King's message about the responsibility to be agents of change, in light of the recent earthquake and its aftermath in Haiti. She encouraged those attending to "address the systemic wrongs that afflict not just our own communities but communities around the world where pervasive poverty and political oppression, rather than social justice and democratic principles, prevail."    Photos: Brian Wilson

"As we see the pictures of utter destruction and hear the heartrending stories of those who could not afford to lose anything but have nevertheless lost everything, we are reminded of Dr. King's message that each of us has a responsibility to be an agent of change -- to address the systemic wrongs that afflict not just our own communities but communities around the world where pervasive poverty and political oppression, rather than social justice and democratic principles, prevail," Princeton President Shirley M. Tilghman said.

Campus and local community members gathered in Richardson Auditorium of Alexander Hall for the King Day ceremony. In addition to remarks from Tilghman and the keynote speaker, Brown University scholar Tricia Rose, students from area schools were honored for their submissions to literary arts, visual arts and video contests. Singer and songwriter Lynette Williams offered musical selections, including a song that she dedicated to Haiti, and Princeton sophomore Allen Williams read an original poem.

The event also included the presentation of the Journey Award for Lifetime Service, which honors efforts to continue the journey to achieve King's vision for America, to Vice President for Campus Life Janet Dickerson in recognition of her commitment to serving as a mentor to and advocate for students, particularly those from underrepresented backgrounds. 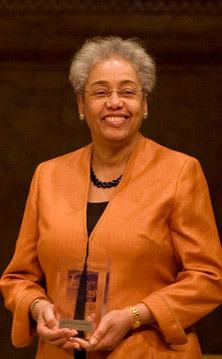 In her introductory remarks, Tilghman reminded audience members to heed King's calls for equality and justice in responding to the deadly earthquake that rocked impoverished Haiti and its capital city.

"The earthquake that leveled Port-au-Prince was especially destructive precisely because its residents had so little to lose," she said. "I am certain that if Dr. King were with us today, he would be urging each of us to find a way to assist the people of Haiti not just to restore the country to its prior state, but to build a more just and prosperous society in its wake. Dr. King, like President Obama, had the 'audacity' to believe -- and inspired others to believe -- as he put it in his beautiful Nobel Prize acceptance speech, that 'peoples everywhere can have three meals a day for their bodies, education and culture for their minds, and dignity, equality and freedom for their spirits.' Haiti deserves no less."

Noting that the tragedy in Haiti was a "collision of forces" that were "both manmade and naturally occurring," Rose said, "This is very much the intersection that King wanted us to attend to."

"The context for the experience of that earthquake is a very long legacy not only of profound colonialism, but also of postcolonial occupation and economic evisceration that had a profound impact on their ability to respond," she said. 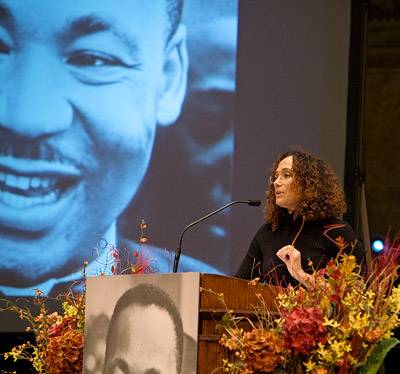 Tricia Rose, a scholar of modern African American culture and chair of the Department of Africana Studies at Brown University, delivered the keynote address. Noting that the tragedy in Haiti was a "collision of forces" that were "both manmade and naturally occurring," Rose said, "This is very much the intersection that King wanted us to attend to."

King would have wanted people to understand the historical, social and economic factors underpinning the tragedy, but he also would have been heartened by the global response, Rose said.

"The thing that has struck me beyond the suffering most is the extraordinary generosity around the world. ... This is really, again, what King was all about," she said, citing one of his most quoted statements: "We are caught in an inescapable network of mutuality, tied in a single garment of destiny."

Linking that message to the student contest winners who were honored at the ceremony, Rose lauded their efforts in producing "reflective, thoughtful, elegant" artistic works that applied King's teachings to challenges in today's society. The students were asked, "What creative insight or original work can you present that transforms the consciousness of American citizens, champions Dr. King's dream for a society that is structurally and morally just, and furthers the idea of equality that is embedded in the ideals of the American dream?"

"All of them captured the sense of urgency ... of these issues, because this isn't just about telling us what's happened, it's about getting us to think together and act," she said. 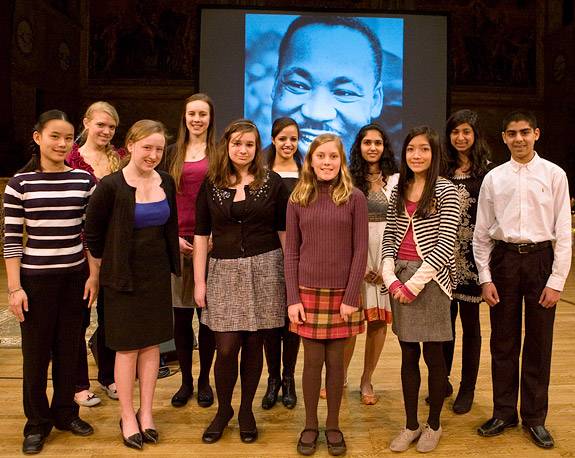 "Through these entries and this contest, I think we get at the heart of what King wants us to do: Tap into our connectedness and our creativity and our intelligence and our knowledge, because art moves us, connects us and inspires us to do the kind of tough, truth-telling, nonviolent-oriented speaking out that we all must do," Rose said. "Art gets us there with a sense of beauty and possibility. I always say, without joy there's no justice, and without justice there's no joy." 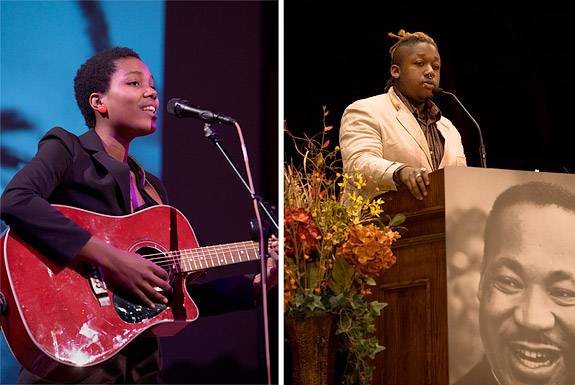 At left: The event also included performances by Lynette Williams, a singer and songwriter from Ridgewood, N.J., who dedicated one piece to Haiti. At right: Princeton sophomore Allen Williams gave a spoken word presentation, reading an original poem.