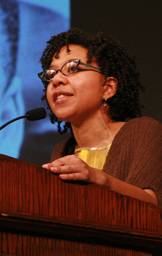 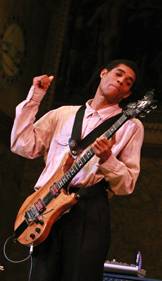 Stanley Jordan, the acclaimed jazz guitarist and a Princeton alumnus, delivered a rousing performance at the King Day ceremony. His selections included "Happy Birthday," a tribute to King written by Stevie Wonder. 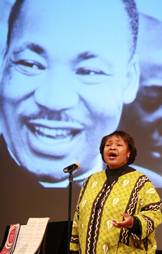 Rochelle Ellis, a soloist who has performed around the country and a voice instructor at  Westminster Choir College of Rider University, was among the performers paying tribute to King and the spirit of the civil rights movement.

Below left: A standing-room-only crowd filled Richardson Auditorium for the King Day celebration. 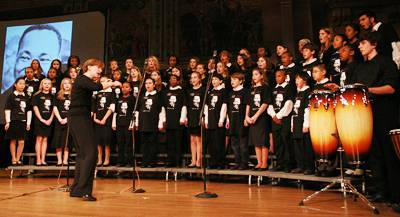 Princeton University honored the memory of Martin Luther King Jr. on Jan. 15 in Richardson Auditorium with a celebration of the inspirational power of music.

The annual King Day ceremony featured a performance by acclaimed jazz guitarist Stanley Jordan, a 1981 Princeton graduate, and a keynote address by Princeton scholar Daphne Brooks, who traced music's central role in African Americans' struggle for equality from the days of slavery to the aftermath of Hurricane Katrina.

Students from area schools also were honored for their entries in an essay, poster and video contest focusing on music of the human rights movement. The event reflected the important influence of music in the work of King, who often invoked musical terminology or employed song lyrics to emphasize key messages in his speeches.

"As the compelling entries in our essay, poster and video contest demonstrate, music has the power to capture the convictions and emotions that underpinned the civil rights movement and other struggles for social justice," Princeton President Shirley M. Tilghman said in opening remarks. "Songs like 'We Shall Overcome,' 'I Shall Not Be Moved' and 'Oh Freedom' are filled with hope and resolution, transcending racial differences and inspiring both the singer and the listener to imagine and work toward a more perfect union." 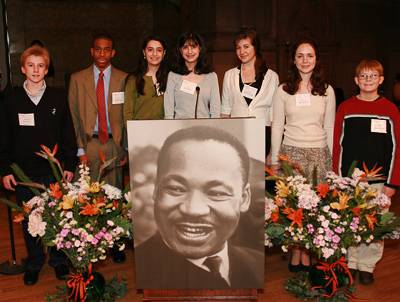 In her address, Brooks noted that the soundtrack of the civil rights movement in the 1960s -- works from artists such as Fannie Lou Hamer, Nina Simone, Curtis Mayfield, James Brown and Aretha Franklin -- was built upon "liberation themes expressed in divinely revolutionary music from the previous century," which also empowered King and other activists.

"We ought to think of King and more broadly this generation of brave and wondrous activists as bold architects and arrangers of radical and revisionist sound that served as a spiritual 'safety zone' of sorts for marchers who faced everyday danger and as a form of spontaneous social documentation that caught and preserved history-making events in song," Brooks said. "It was a sound that galvanized the masses."

Brooks, an associate professor of English and African American studies who focuses on African American literature and culture, noted that the struggle for liberation continued to find expression in the music of Marvin Gaye, Isaac Hayes and Stevie Wonder in the 1970s, Living Colour in the 1980s and, most recently, R&B singer Mary J. Blige in the wake of Hurricane Katrina. Brooks cited Blige's performance in a powerful remake of the U2's hit song "One" -- in a duet with U2 singer Bono during a 2005 Katrina relief concert -- as a poignant reminder of black females' suffering in American culture.

As America faces a "current era of a seemingly unending war, poverty and an African AIDS pandemic that demands our attention," Brooks said the need for musical activism carrying the spirit of Martin Luther King Jr. must continue. She pointed to the Willie Mae Rock Camp for Girls in New York -- a camp named for African American rock and blues pioneer Big Mama Thornton where Brooks taught last summer -- as one possible source of inspiration for this next generation.

"Here's hoping that the next revolution is already under way at Willie Mae, where music for a new movement, for a new generation and embodied by girls ages 8 to 18 of all colors, multiple religions, from all over the world -- who are armed with bass, drums, guitars, keyboards, two turntables and microphone -- are ready to change the world and ready to turn up the volume so that we can hear, feel, nod your head and rock out to King's message in stereo for years and years to come," Brooks said. 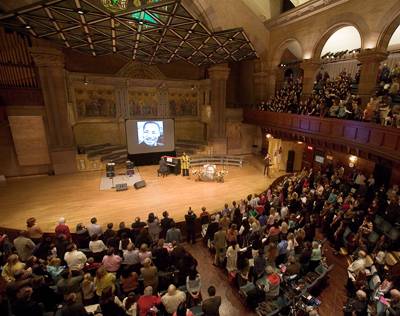 In remarks during his performance, Jordan also offered a testament to the influence of King and the musical activists of the 1960s and 1970s, saying he gained "courage from Dr. King to pursue my dream in the music world" by realizing he needed to stand firm to his own beliefs and try to create music that would make a contribution to society.

"Through trial and error, I discovered that the best way to make it through this industry I'm in is to stick to my principles and not to follow what people say," he said.

Jordan played a four-song concert for the standing-room-only crowd at Richardson, including simultaneous performances on guitar and piano. His set included "Happy Birthday," a tribute to King written by Stevie Wonder, who championed the recognition of King's birthday as a national holiday.

The event also included selections by a combined group representing the Trenton Children's Chorus Covenant Singers and the Princeton Day School seventh- and eighth-grade choir and by Rochelle Ellis, a soloist who has performed around the country and a voice instructor at  Westminster Choir College of Rider University.