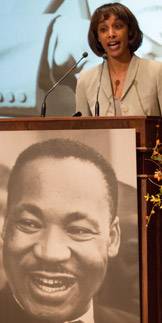 Cecilia Rouse, dean of the Woodrow Wilson School of Public and International Affairs, speaks to students, faculty, staff and community members gathered at Richardson Auditorium in Alexander Hall on Jan. 19 for Princeton University's annual Martin Luther King Jr. Day celebration. Rouse looked back at King's call for economic justice for all and assessed the nation's uneven progress toward that goal.

At Princeton University's annual Martin Luther King Jr. Day celebration Jan. 19, Cecilia Rouse, dean of the Woodrow Wilson School of Public and International Affairs, looked back at King's call for economic justice for all and assessed the nation's uneven progress toward that goal.

Students, faculty, staff and community members came together at Richardson Auditorium in Alexander Hall for musical performances, remarks from several speakers on King's legacy and the presentation of the University's Martin Luther King Journey Award. In her keynote address, Rouse said King eloquently highlighted the need for improved economic conditions for the poor in a speech given the day before his assassination.

"It's all right to talk about 'long white robes over yonder,' in all of its symbolism," King said in the speech given April 3, 1968, in Memphis, Tennessee. "But ultimately people want some suits and dresses and shoes to wear down here! It's all right to talk about 'streets flowing with milk and honey,' but God has commanded us to be concerned about the slums down here, and his children who can't eat three square meals a day."

"It was quite purposeful that King paid attention to economics in this speech," said Rouse, who is also the Lawrence and Shirley Katzman and Lewis and Anna Ernst Professor in the Economics of Education and a professor of economics and public affairs at the Wilson School. "His visit to Memphis and support of the sanitation strike was part of what he saw as the next phase of the Civil Rights Movement: the fight for economic justice." 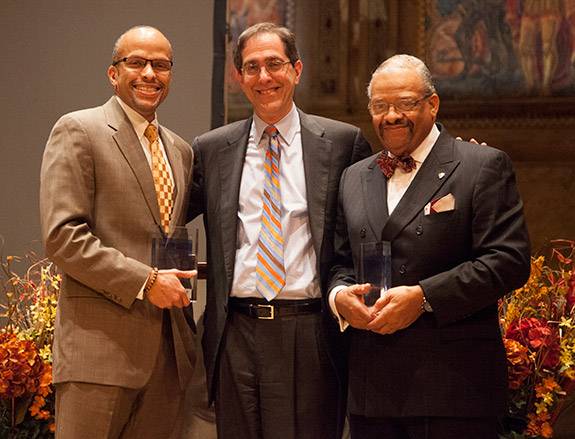 That effort, known as "The Poor People's Campaign," focused on employment, income supports and housing. After King's death, the push continued with protests in Washington in the summer of 1968, and Rouse recalled her own family's visits to the campaign's headquarters and participation in protests.

"For King, the Promised Land wasn't just about being equal under the law," Rouse said. "He wanted legal rights to translate into economic and human rights. So the theme of my talk is about this next phase — and sadly the last phase — of his work. How has the country — and particularly African Americans — fared since the launch of the Poor People's Campaign?"

In 1966, about 15 percent of Americans lived below the poverty line, Rouse said. Today, the percentage is about the same.

"That means that today about 45 million people in the United States live on less than $24,000 for a family of four," Rouse said.

"So, what do we do about poverty in the U.S.?" Rouse asked. "I would argue that in some areas we have enacted policies that are quite good and in other areas we have next to none. The trend has been to tie assistance to employment — training programs, the Earned Income Tax Credit, child care subsidies, even extra cash assistance for those who work. These work-based policies have largely escaped the cuts in Congress and in some cases have been given a boost. But a safety net for those who cannot work — either because they can't find work over the long term or because they are unable to work — is pretty nonexistent."

Still, Rouse emphasized that progress has been made toward King's goals. 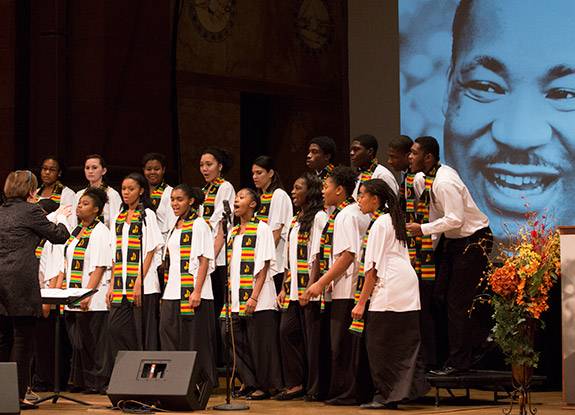 The Trenton Children's Chorus performs at the beginning of the King Day celebration. The chorus is part of an after-school program that provides support to 140 young people in grades K-12 in the Trenton area.

"His work was not in vain," she said. "While the Poor People’s Campaign did not get everything it sought, we have clearly seen improvements in economic stability and increased access to housing and education."

One particular bright spot is education, said Rouse, who has produced groundbreaking research in labor economics, with a focus on the economics of education.

The percentage of Americans with a high school diploma is 88 percent today, compared with about 50 percent in 1966, Rouse said, with the largest gains among blacks, whose rate of completion has risen to 85 percent from 28 percent. And today, 32 percent of adults have completed at least four years of college, compared with 10 percent in 1966.

"Of course, while we are a long way from 'separate but equal,' many blacks and Hispanics do attend poorer-quality — mostly segregated — schools and there are still disparities in postsecondary school attendance," Rouse said. "The fact that discrepancies remain only reinforces the importance of reforming our K through 12 system so that all children have access to quality public education, and the importance of increasing diversity in higher education by finding a place for all qualified and motivated students regardless of their race, ethnicity or economic background." 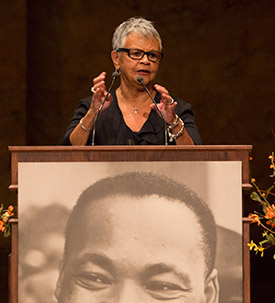 U.S. Rep. Bonnie Watson Coleman, who represents the Princeton area, speaks about challenges to gains made by the Civil Rights Movement.

Rouse concluded with a call to continue King's work.

"African Americans have made progress in the last half century," she said. "We are more educated and less poor. We have advanced civil rights and voting rights. Dr. King would be proud of the nonviolent protests that have taken place across this country in the past few years, from the Occupy Movement for economic justice to the more recent protests against police brutality.

"But we cannot quit now."

In his introductory remarks, President Christopher L. Eisgruber said he believed King would be proud of recent protests on the University campus.

"Many on our campus have engaged in impassioned protests and vigorous dialogue about issues of diversity and inclusion here at Princeton and in our society at large — spurred by the demonstrations in Ferguson, Missouri, in New York City, and elsewhere around this country," Eisgruber said. "This peaceful and powerful activism of our students and others in our campus community is a direct reflection of the legacy of Dr. King and his incomparable service to society." 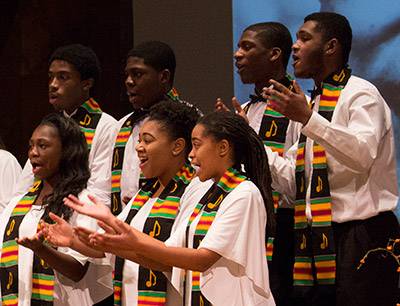 The Trenton Children's Chorus performs "Lift Every Voice and Sing" to conclude the celebration.

This year's event also featured the presentation of the Martin Luther King Journey Award, which recognizes efforts to continue the journey to achieve the civil rights leader's vision.

David Campbell, a senior staff psychologist in Counseling and Psychological Services, received the Journey Award for Special Achievement for empowering students from diverse backgrounds. Kenneth Grayson, a shop foreman in the Electric Shop, received the Journey Award for Lifetime Achievement for his tireless commitment to campus life over nearly 45 years.

Another speaker at the event was Bonnie Watson Coleman, who represents the Princeton area in the U.S. House of Representatives. Coleman applauded the progress highlighted in Rouse's speech but also cited concern about efforts to roll back some of the gains achieved by the Civil Rights Movement.

The Trenton Children's Chorus performed in front of a large screen displaying a photo of King to open and close the ceremony.