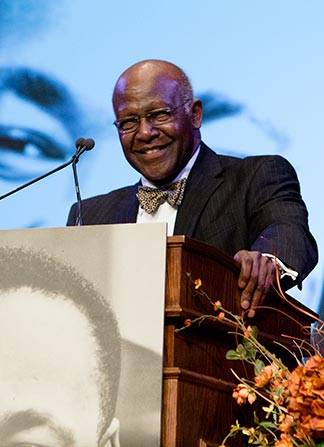 Wesley Harris, the Charles Stark Draper Professor of Aeronautics and Astronautics at the Massachusetts Institute of Technology, gives the keynote speech at Princeton University's Martin Luther King Day celebration on Jan. 18 in Richardson Auditorium in Alexander Hall. The annual event honors the legacy of the civil rights leader.

Princeton University honored Martin Luther King Jr. during a Jan. 18 ceremony featuring reflections on the civil rights leader's legacy, remarks on the continued quest for racial justice in the United States, musical performances, and a recognition of community and campus service efforts.

The annual Martin Luther King Day celebration brought together faculty, staff, students and community members in Richardson Auditorium in Alexander Hall. In his introductory remarks, President Christopher L. Eisgruber said this year's event was especially meaningful because "the nation is once again in a period of heightened attention to questions of racial justice."

"I hope you will agree with me that it is appropriate to begin this afternoon's ceremony by considering the relevance of Dr. King's example to protests that have taken place here and on other campuses over the past year," Eisgruber said. "We remember and celebrate Dr. Martin Luther King for his commitment to equality, to justice, to humanity and to social change. We remember him also for his devotion to non-violent protest."

Eisgruber said recent student activism is part of a struggle for genuine equality on college campuses and across the country.

"We should care about making our college campuses more inclusive and more fully committed to real mutual understanding and respect, but, even more fundamentally, we should care about making this true for the country," Eisgruber said. "We should care, as Dr. King urged us to do, about what he called the 'other America' — about the America where people are not so fortunate as are we on this campus, about the America where people struggle to find decent jobs, to get health care, to educate their children, to be treated fairly and to live without fear."

Eisgruber concluded: "Only by making that struggle our own can we celebrate and honor Dr. King in a way truly worthy of his singular legacy." 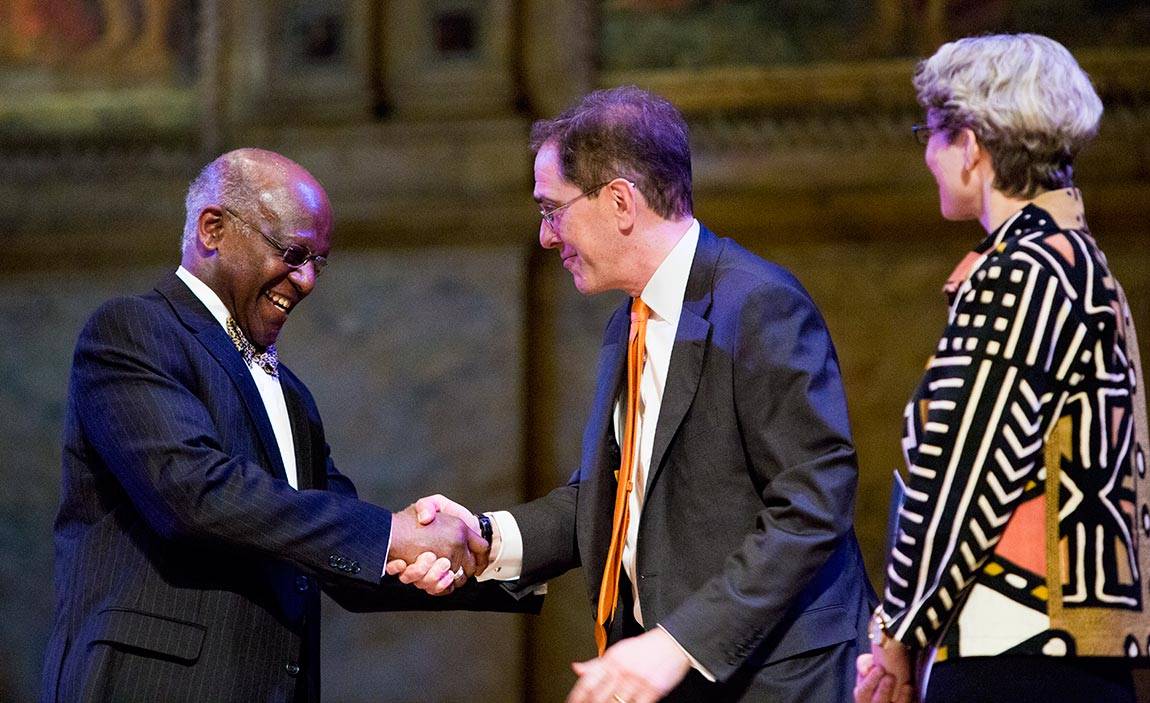 (From left to right) Harris appears on stage with President Christopher L. Eisgruber and Michele Minter, vice provost for institutional equity and diversity.

Keynote speaker Wesley Harris, the Charles Stark Draper Professor of Aeronautics and Astronautics at the Massachusetts Institute of Technology (MIT), spoke of his experiences growing up in Richmond, Virginia, in the 1940s and 1950s, and how a personal encounter with King shaped his life.

"The opportunity to speak at Princeton in celebration of the legacy of Dr. Martin Luther King Jr. is an honor," Harris said. "For this opportunity, and much, much more, I remain grateful to Princeton."

Harris was the first African American to receive a Ph.D. in engineering at Princeton, in 1968. Among many positions at MIT, he served as associate provost for faculty equity from 2008-13 and as head of the Department of Aeronautics and Astronautics from 2003-08.

"So how did I get to Princeton and what impact did Dr. Martin Luther King Jr. have in the process?" Harris said, recalling the Richmond of his childhood. 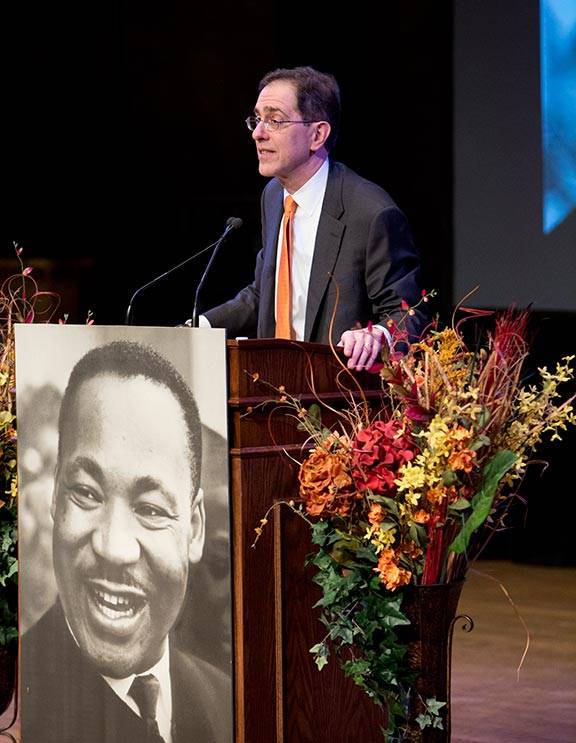 In his introductory remarks, Eisgruber said this year's ceremony was especially meaningful because "the nation is once again in a period of heightened attention to questions of racial justice."

Harris spoke of the city's Monument Avenue, lined with statues memorializing Confederate leaders of the Civil War and noted he was not allowed there as a black boy. Attending an all-black high school, Harris said he excelled at science and physics.

In June 1958, King visited Richmond. Harris' science teacher, Eloise Bowles Washington, approached the civil rights leader about the possibility of Harris attending the University of Virginia. Harris recalled that King warned of dangers to a young black man attending the university at that time and pressed the teacher on why Harris should enroll.

"He will prove that scholarship by, about and for black Americans is possible. This is the fundamental challenge of our generation," Harris quoted his teacher as answering.

Among the many lessons that Harris took from King was that his "ideas, vision and mission" challenged black people to move forward. 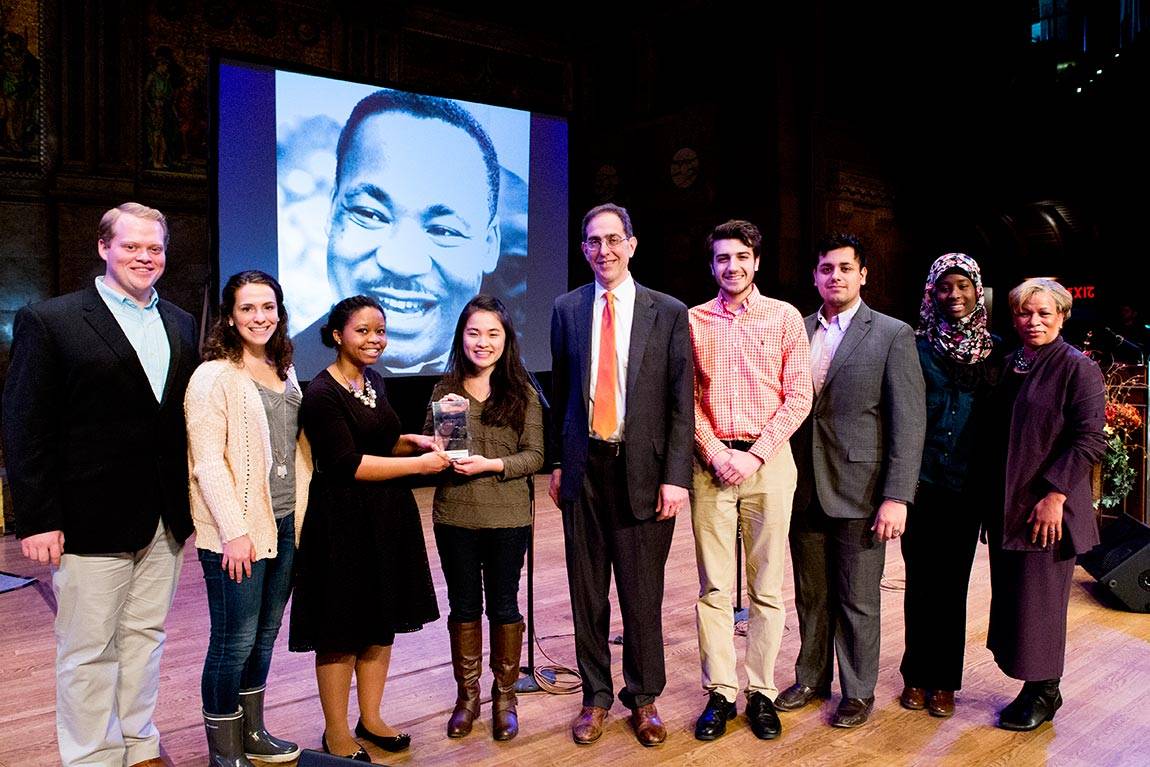 "Dr. King transformed the 'Negro' to the 'black' man and woman," Harris said. "Fear was replaced by newly self-made courage. Respect for self was followed by heightened self-confidence that black Americans could, if allowed, add unqualified value to the country."

Harris went on to speak of the continued challenges to racial justice, as well as literal and figurative "destruction" of black people today, sharing his observations of the country and personal experiences as a professor. He said he ultimately hoped his remarks would make the audience "think and act differently about race in America." 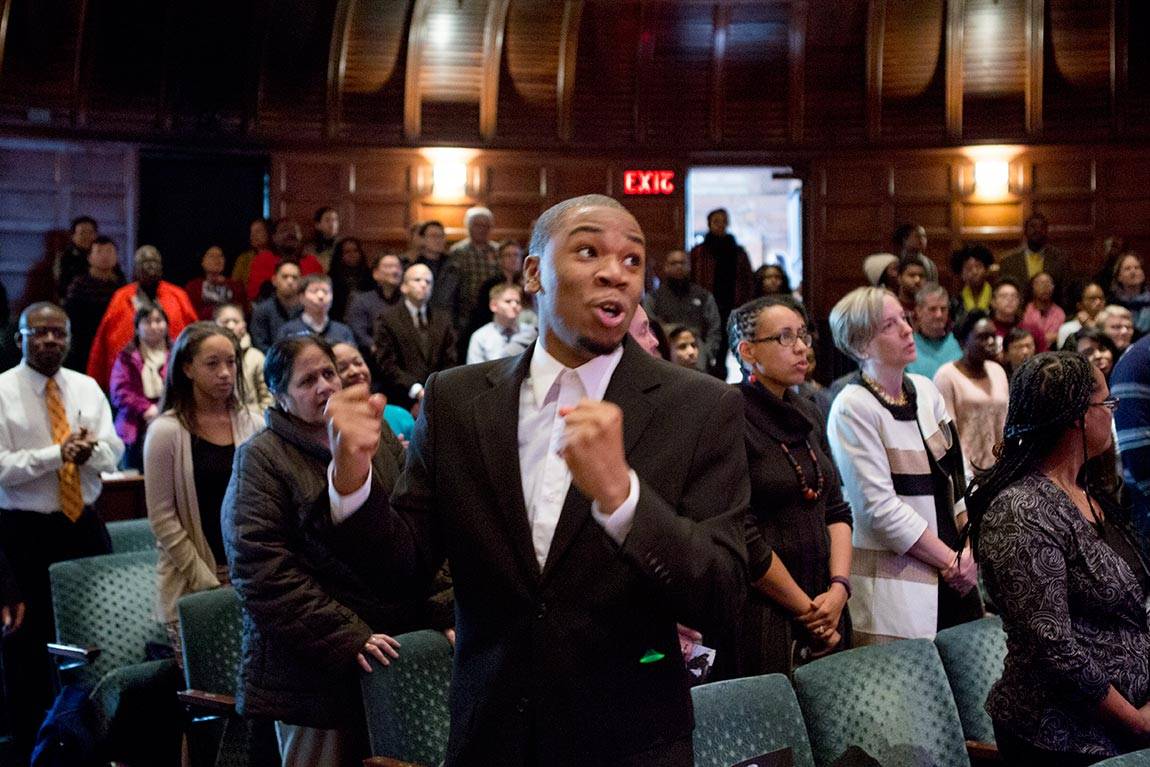 A singer with the Trenton Central High School Inspirational Choir gets the audience on their feet during a performance.

The ceremony also included the presentation of the Martin Luther King Day Journey Award for Special Achievement, which recognizes efforts to continue the journey to achieve King's vision. The award was given to the student leaders of the Princeton Hidden Minority Council (PHMC), which was established in 2013 to support, advocate for and share the stories of lower-income and first-generation college students at Princeton. Seniors Julie Kwong and Brittney Watkins accepted the award on behalf of the student group.

The University also marked King's work with a third annual Day of Service, held Friday, Jan. 15. University volunteers helped out at the Mercer Street Friends Food Bank in Ewing and the Princeton Nursery School in Princeton. The volunteer efforts are part of the longer Month of Service this January sponsored by the Pace Center for Civic Engagement.

The MLK Day celebration opened and concluded with music from the Trenton Central High School Inspirational Choir, who got the audience on their feet singing and swaying with the student singers. 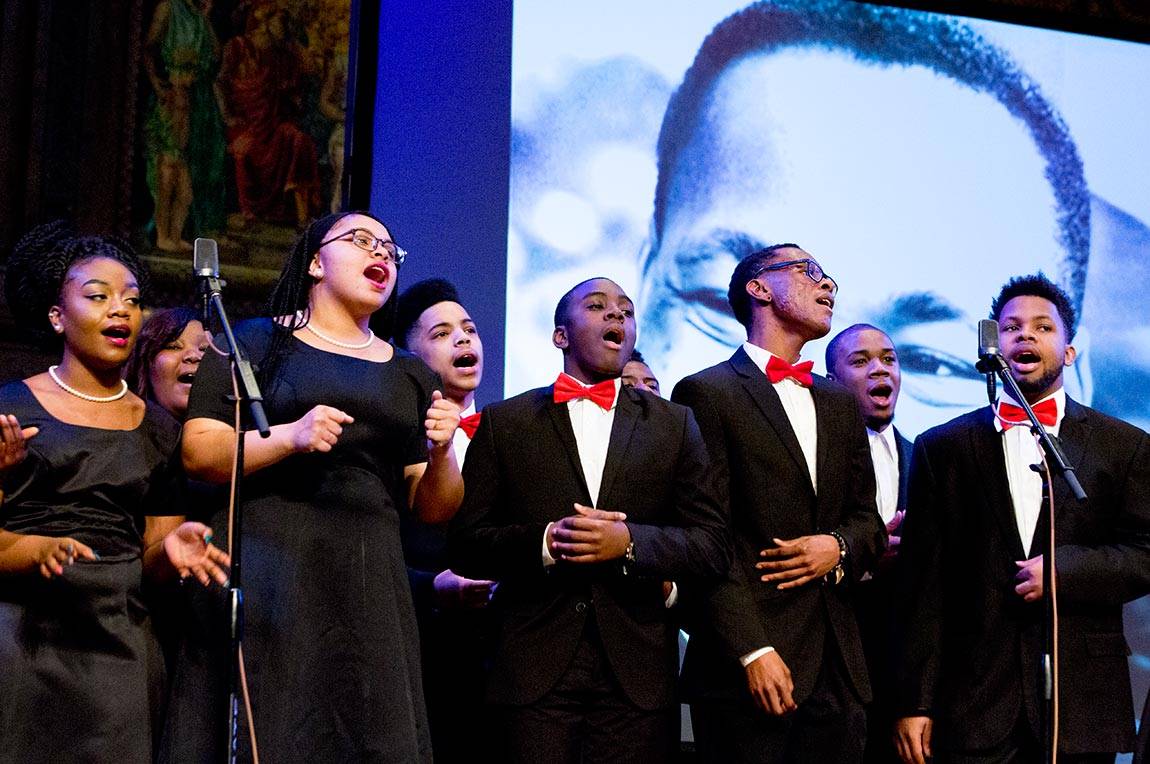 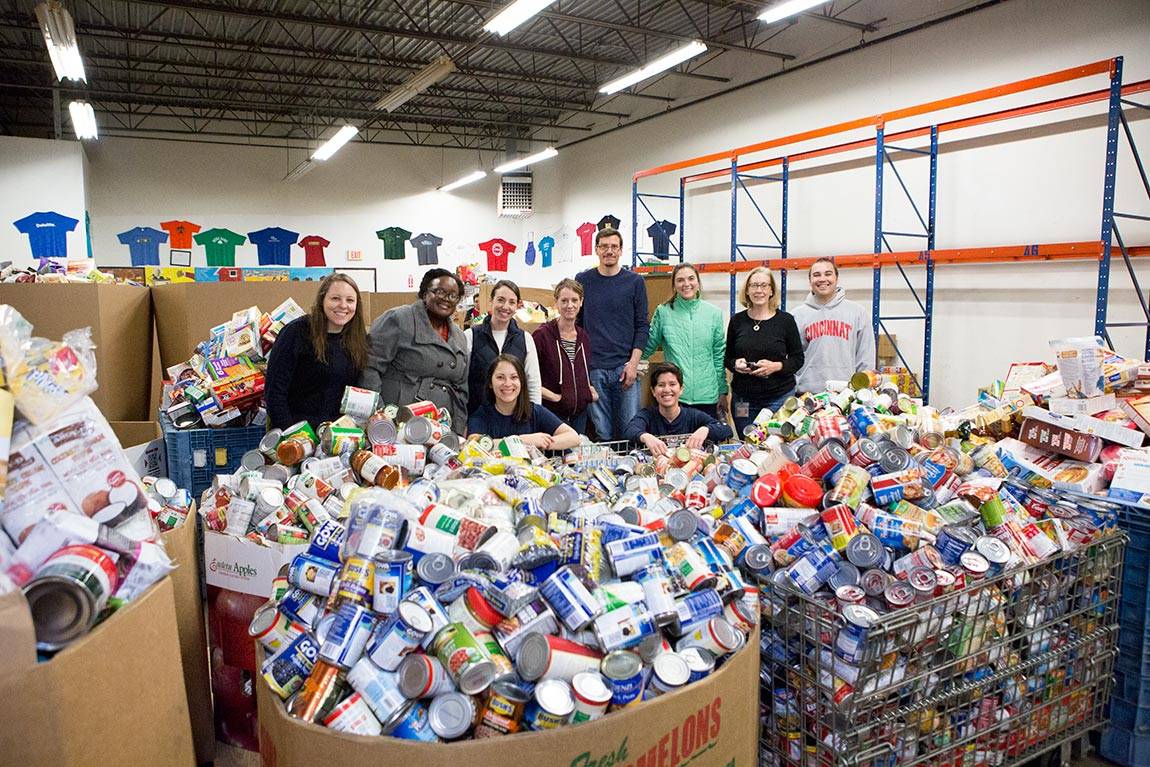 University staff volunteer at the Mercer Street Friends Food Bank in Ewing on Jan. 15 as part of the third annual Day of Service.