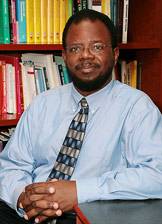 William Massey, a renowned engineering professor who has been lauded for his efforts to support underrepresented minorities in the fields of science and technology, received Princeton's MLK Day Journey Award, which recognizes efforts to continue the journey to achieve Martin Luther King Jr.'s vision for America.

Massey, the Edwin S. Wilsey Professor of Operations Research and Financial Engineering and a 1977 Princeton alumnus, was honored Jan. 19 with the Journey Award for Lifetime Service at the University's King Day ceremony in Richardson Auditorium of Alexander Hall.

Members of the University community nominated candidates for the Journey Award based on their support for King's philosophy and teachings and their contributions to the improvement of civil rights and/or human rights. Preference was given to candidates who have positively affected the University campus and/or community. Members of the MLK Day Committee judged the nominations, and Princeton President Shirley M. Tilghman selected the finalist. The award, which was instituted in 2005, includes a commemorative plaque and a wristwatch.

"As many on our campus know, he is a true mentor -- a man who has committed himself throughout his career to helping would-be mathematicians from underrepresented groups realize their potential and fulfill their aspirations," Tilghman said in presenting Massey the award. "… Professor Massey has done as much as anyone I know to ensure that mathematics and engineering are fields where African Americans and other minorities can flourish. Drawing on his own experience as a mentee, he has given a succession of young men and women the practical guidance, moral support and intellectual challenge they need to become accomplished researchers and teachers in their own right."

In decades of mentoring minority and women mathematicians, Massey has fostered a new, more diverse generation of scholars. He is "untiringly working to increase the number of minority graduate engineering students on campus, as well as working to improve their career outlook and chances," Claire Gmachl, professor of electrical engineering, wrote in nominating Massey for the Journey Award.

Massey, the first African American Princeton undergraduate to become a full professor at the University, joined the Princeton faculty in 2001 after 20 years as a researcher with the Mathematical Sciences Research Center at Bell Laboratories.

Gmachl described as Massey as having "energized the campus community" after returning to Princeton as a faculty member. He is the founder of the Wesley S. Harris Scientific Society, which provides an intellectual and social home for Princeton graduate students from underrepresented groups by encouraging them to pursue careers in science and technology research. Massey also serves as a mentor and nurturer to graduate students by introducing them to successful engineering professionals.

Yusuf Oni, a graduate student in mechanical and aerospace engineering, said Massey has been an important resource for minority undergraduate and graduate students not only in the engineering school but also in departments such as molecular biology and psychology. "He is always ready to assist and does go out of his way to seek those who might need help," Oni said.

Massey founded and continues to provide leadership for the annual Conference for African American Researchers in the Mathematical Sciences. In 2006, he was awarded the Blackwell-Tapia Prize for achievements in mathematical research and his mentoring of minorities and women in the field of mathematics.

Massey is a leader in the field of queueing theory, which is the mathematical analysis of systems involving customers waiting for services or resources, such as call centers. Mathematical models of such systems allow for predictions of key performance variables such as expected response times and customer backlogs, which are critical to the efficient design and profitability of communication systems, transportation networks, computer operating systems and many other business operations. In 2006, Massey was made a fellow of the Institute for Operations Research and Management Sciences for his contributions and advances to the analysis of queueing systems.

In 2005, The Journal of Blacks in Higher Education named Massey as second among the most frequently cited black mathematicians in the world.

A native of Missouri, Massey was a mathematics major at Princeton and earned his Ph.D. from Stanford University.