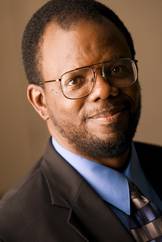 William Massey, the Edwin S. Wilsey Professor of Operations Research and Financial Engineering and a 1977 Princeton alumnus, will receive the Blackwell-Tapia Prize Nov. 3 in recognition of his outstanding record of achievement in mathematical research and his mentoring of minorities and women in the field of mathematics.

Below left: Massey (foreground) gathered with some of the people he has mentored over the years, including (from left) Robert Hampshire, a current graduate student in operations research and financial engineering who will join the faculty at Carnegie Mellon this spring; Arlie Petters, a graduate student from 1988 to 1991 who is now a professor of mathematics and physics at Duke University; and Otis Jennings, a 1994 undergraduate alumnus who is now an assistant professor in the Fuqua School of Business at Duke University.

He has created a community of colleagues who support and inspire each other’s research, including Massey’s own.

“His mentorship is more than just one-on-one,” said Otis B. Jennings, a member of Princeton’s class of 1994 who is now an assistant professor at Duke University’s Fuqua School of Business.

“It’s sort of a meta-mentorship,” said Jennings, who was advised on his senior thesis by Massey. “He creates the environment where people can make connections for mutual benefit. As a mentor you may help someone get a Ph.D. — but in the end you have a new colleague. And Bill is building a family of colleagues.”

On Nov. 3, Massey, the Edwin S. Wilsey Professor of Operations Research and Financial Engineering and a 1977 Princeton alumnus, will receive the Blackwell-Tapia Prize at the Institute for Mathematics and its Applications in Minneapolis.

The prize is in recognition of his outstanding record of achievement in mathematical research and his mentoring of minorities and women in the field of mathematics. In a tribute to Massey’s distinguished career as a pioneer in the field of applied mathematics called queueing theory, the institute has organized a two-day conference on topics related to Massey’s research.

In addition to Jennings, minority and women Princeton alumni Massey has mentored include Andrea Bertozzi, a 1987 undergraduate and 1991 graduate alumna who is currently a full professor in mathematics and director of applied mathematics at the University of California-Los Angeles; Arlie Petters, who attended Princeton as a graduate student from 1988 to 1991 and is now a full professor of mathematics and physics at Duke University; and Robert Hampshire, a current Princeton engineering graduate student who will begin a teaching position at Carnegie Mellon in the spring.

Massey, the first African American Princeton undergraduate to have become a full professor at the University, also founded and continues to provide leadership for the annual Conference for African American Researchers in the Mathematical Sciences, now in its 12th year. 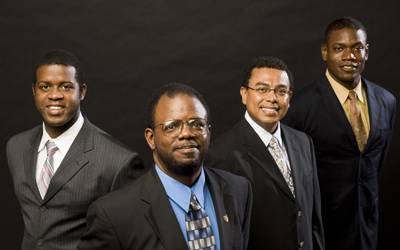 Massey grew up in St. Louis, the son of a high school counselor and a home economics teacher. He loved numbers as a small child, and his mother playfully encouraged his talent by cutting up calendars for him and creating games. His mathematical abilities became fully manifest in a predominantly black public school for gifted students, and later in high school.

When it was time for college, his parents brought him east to visit Harvard, MIT and Princeton. “It certainly helped having parents who were educators,” said Massey. “They were encouraging of me wanting to do mathematics. At the time, I didn’t know that other black people even worked in math.”

Massey remembers his own mentors as an undergraduate at Princeton with great fondness: mathematicians W. Stephen Wilson, Ralph Fox and Bernard Dwork; and physicists Cyrus Hoffman and Aaron Lemonick.

“I was lucky in who taught me,” said Massey, who remembers that Wilson advised him to do something non-intuitive when he arrived at Princeton.

“I saw myself as a math major and had placed out of freshman math,” Massey recalls. “Wilson told me to go ahead and take a freshman honors-level calculus class but sophomore-level physics. This turned out to be the best advice I could have gotten because I had been for the most part self-taught in math. [By taking the calculus class] I learned that my understanding of math was really cookbook mathematics; I was familiar with various formulae and how to manipulate them but not with the more sophisticated understanding of how to prove theorems.”

Massey said that an early course with Lemonick imbued him with a love for physics. “I was thinking I didn’t want to be that involved in physics but he actually got me excited about it. So rather than thinking of it as fulfilling a requirement, I took physics throughout my four years.”

Graduating magna cum laude and Phi Beta Kappa with a degree in mathematics, Massey continued on to graduate school in mathematics at Stanford University, earning his Ph.D. in 1981. While at Stanford, he became friends with Erhan Çinlar, who was then at Northwestern University and is now Princeton’s Norman J. Sollenberger Professor in Engineering. Çinlar, who will be delivering the plenary address at the conference in honor of Massey, tried to hire Massey right out of graduate school but Massey demurred. He instead went to Bell Labs, then in its heyday as one of the nation’s premier research institutions, and stayed for 20 years.

Massey credits his time at Bell Labs with not only fostering innovative research but also creating an environment that allowed minorities to flourish. He had first worked there his summer after he graduated from Princeton, and felt inspired by the sizable cadre of black scientists.

Massey was in the mathematical sciences research center but rubbed elbows with researchers in electrical engineering and physics and many other fields. On a given day he might have bumped into Jim West, co-inventor of the modern day microphone, and then the next minute have run into the physicist Shirley Jackson, now president of Rensselaer Polytechnic Institute.

“There was no shortage of black individuals who were high-achieving in their respective fields,” said Massey. “But they were also dedicated collectively to creating a legacy for the next generation.”

Massey said that his mentoring philosophy grows out of the Bell Labs approach — and out of the notion that small steps cumulatively will lead eventually to momentous change.

Bell Labs hired its first African American scientist, W. Lincoln Hawkins, in 1942 but it would be 20 more years before it hired another African American researcher. By the time Massey first worked there, Bell Labs had a critical mass of black scientists.

“We see what happened at Bell Labs with Lincoln Hawkins,” said Massey. “Imagine what could have happened at Princeton or any other research institution for that matter” if someone of Hawkins’ stature had been hired back in the 1940s.

Massey, his protégés say, may well become to Princeton what Hawkins was to Bell Labs: a fulcrum that tips the institution into becoming a mecca for African American scientists.

Massey and his protégés Bertozzi, Jennings, Petters and Hampshire all received graduate school funding from Bell Labs fellowships. Massey served as a mentor in the Bell Labs fellowship programs for minorities and women — the same programs in which he participated as an undergraduate. He conducted joint research with students funded by these programs over the summer, publishing seven papers with students as co-authors. In addition, he included his students as speakers at telecommunications conferences.

Çinlar, who came to Princeton in 1985 and served as the founding chair of the Department of Operations Research and Financial Engineering, continued his efforts to tempt Massey back into academia for two decades. Finally, in 2001, Massey relented and came to Princeton as a full professor.

“One thing I learned from my experience with Bill Massey is that you have to keep after valuable people,” said Çinlar. “You have to pursue them over quite a long period of time and get used to being spurned.”

At Bell Labs, Massey had begun to make his mark in queueing theory by analyzing it from a dynamic rather than a static point of view. At Princeton, he has continued that research and has taught courses in queueing theory and Monte Carlo simulations.

Queueing theory is a key mathematical tool used to solve many problems of providing communications services, from the old-fashioned telephone service to Internet phenomena like Napster and YouTube. The success of a business model for a wireless telephone provider, for example, might hinge on how efficient that provider is at applying queueing theory.

“Even simple queuing theory involves a lot of complex mathematics and statistics, and understanding the type of queuing systems that arise in modern communication systems requires new mathematics and new analysis,” said Douglas Arnold, director of the Institute for Mathematics and its Applications and an organizer of this year’s Blackwell-Tapia Conference at which Massey will receive his award. “This is where Bill Massey has made outstanding contributions.”

A much cited paper of Massey’s showed how to create a mathematical description of wireless networks in which calls are being placed and received from moving vehicles. In 2005, The Journal of Blacks in Higher Education named Massey the second most frequently cited black mathematician in the world. Massey also has a patent on an optimal server staffing algorithm for call centers that is based on his research in queueing.

Three days after receiving the Blackwell-Tapia Prize, Massey (along with Robert Vanderbei) will be inducted as a fellow of the Institute for Operations Research and the Management Sciences — an honor accorded to fewer than 1 percent of the institute’s membership and made in recognition of significant research contributions.

In addition to carrying on his research from Bell Labs, Massey has built upon the mentoring efforts he began there. He has served as a board member for the National Association of Mathematicians, a mathematics organization for underrepresented minorities, and has hosted its annual presentations by doctoral recipients that provide students with an opportunity to showcase their research at a major international conference.

“Bill always coupled his mentoring with a lot of mathematical discourse,” said Arlie Petters, who moved on to MIT after three years of graduate work at Princeton and earned his Ph.D. there. “It created an ideal setting for addressing a variety of ideas and techniques. I enjoyed those grad school days largely due to his mentoring style.”

Massey also has been an active participant in the Blackwell-Tapia Conference, held every other year in honor of David Blackwell and Richard Tapia, two mathematical scientists who inspired many African American, Latino/Latina and Native American mathematicians. In receiving the third biennial Blackwell-Tapia Prize at this year’s conference, he follows in the footsteps of Petters, who was the first recipient of the prize in 2002.

During the 1980s and 1990s, Massey was also a driving force in the Association of Black Princeton Alumni. “The reason ABPA is one of the best organized and largest affinity groups among Princeton alumni is due in part to his legacy,” said Jennings. Massey served as moderator of a panel discussion about careers in academia at Princeton’s recent “Coming Back and Looking Forward” conference for black alumni.

One former Princeton student who attended the Princeton conference described Massey’s mentoring as a kind of “tyrannical affection.” “If Bill takes a liking to you, you are in for a rigorous friendship,” he said.

Jennings acknowledged that Massey can be tough on his mentees. “Bill holds himself to a very high standard and if you are going to do business with him you had better hold to that standard as well. Bill likes to brag that I had never worked hard until I met him. He is a refreshing combination of brilliance, perseverance and concern for others.”

But, Jennings emphasized, Massey is in the business of creating peers, not acolytes.

“As I mature as a researcher my appreciation of Bill continues to grow,” said Jennings. “I have always been able to confide my research dreams and aspirations to him. But our relationship has experienced an evolution. Now I have an independent perspective that I hope he benefits from as much as I benefit from his insight. We have come full circle.”