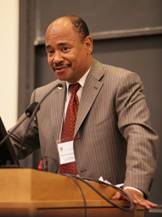 Kneeland Youngblood, a 1978 Princeton graduate and accomplished leader in business, medicine and government, gave the keynote address at "Leading Change in Science and Technology: A Princeton Engineering Conference for Black Alumni" on Friday, April 27. The two-day conference brought together black leaders in science and technology, as well as public policy and business to share ideas about leadership, entrepreneurship and "best practices" for increasing diversity in the scientific and engineering fields.

At left: Conference participants had a chance to greet one another at a breakfast before sessions began on Friday morning. Alumni attending included (from left): Catherine Toppin '02, an associate in the Intellectual Property Group at Edwards Angell Palmer and Dodge LLP in Boston; Otis Jennings '94, assistant professor at Duke University's Fuqua School of Business; Abigail Joseph '95, a middle school technology specialist at Prospect Sierra School in El Cerrito, Calif.; and Audrey Ellerbee '01, a doctoral candidate in biomedical engineering at Duke. 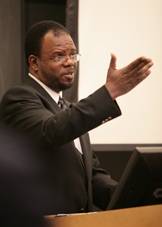 Conference organizer William Massey, a 1977 Princeton graduate and the Edwin S. Wilsey Professor of Operations Research and Financial Engineering, participated in a panel discussion with other faculty members on "Princeton Today: Leading Research and Education." Massey was praised for his role as a mentor to generations of Princeton students. Above left: H. Vincent Poor, dean of the School of Engineering and Applied Science (center) spoke with Yina Moore '79, principal of YAM Design and Development in Princeton, and Henry Coleman '73, a network specialist from Cumberland, R.I., who also is the parent of a 2003 Princeton graduate. At left: Tonya Miles '82, a member of the Maryland State Board of Education, made a point during Poor's welcoming remarks, during which he discussed the need to increase diversity in the student body and faculty in the engineering school. Photos: Denise Applewhite

Change is inevitable and must be guided carefully to improve individual lives and society, Kneeland Youngblood said April 27 at a Princeton conference on leadership and diversity in engineering, science and mathematics.

"There is never an opportune time to take risk, but in not changing, you're taking risk," said Youngblood, a 1978 Princeton graduate and accomplished leader in business, medicine and government. He illustrated his point using examples from his wide-ranging career, including the careful calculations that went into his successful transition from an emergency room doctor to his current role as co-founder and managing director of Pharos Capital Group and a member of the Council on Foreign Relations.

The two-day conference, titled "Leading Change in Science and Technology: A Princeton Engineering Conference for Black Alumni," brings together black leaders in science and technology, as well as public policy and business. The event, which was set to continue on Saturday, presents a forum for alumni to learn about research and education in Princeton's School of Engineering and Applied Science and to share ideas about leadership, entrepreneurship and "best practices" for increasing diversity in the scientific and engineering fields.

"This conference challenges ourselves and the University to take leadership roles in different parts of our society in different aspects of engineering, science and technology," Youngblood said. 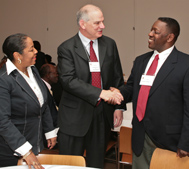 At a breakfast Friday morning, Dean of Engineering H. Vincent Poor, who is a 1977 Princeton graduate alumnus, discussed gender and racial diversity with conference attendees. While minority representation has improved in recent years, Poor was adamant in his conviction that much more remains to be done to increase diversity in the student body and faculty in the engineering school, as well as throughout academia and industry in general.

"The 'Leading Change' conference represents a chance for us to brainstorm about best practices for diversity, and also to reconnect with Princeton alumni and engage them in this important discussion," said conference organizer Margaret Martonosi, a professor of electrical engineering who chairs the engineering school's diversity committee. "I look forward to being able to implement ideas from this workshop in our efforts here on campus."

Alumni in attendance were pleased with the opportunity to share their ideas and strategies to increase diversity and improve the Princeton experience for current and future black students.

"It's wonderful that the University is providing ways for alumni to contribute things other than dollars," said Audrey Ellerbee, who graduated from Princeton in 2001 with a BSE in chemical engineering. A doctoral candidate in biomedical engineering at Duke University, Ellerbee was recently awarded a Congressional Fellowship from the American Association of the Advancement of Science. "We can have a lasting impact by contributing ideas," she said.

Many of the conference attendees, including Youngblood and conference organizer William Massey, a 1977 Princeton graduate and the Edwin S. Wilsey Professor of Operations Research and Financial Engineering, already have had a lasting impact by serving as mentors to generations of Princeton students.

"Whether we're trying to increase diversity in graduate school or in different industries, the first hurdle is just the comfort level," said Otis Jennings, a 1994 Princeton graduate and assistant professor at Duke's Fuqua School of Business. "The way you keep people is by making them feel like they belong, which is what I had with Bill Massey. I didn't feel like I was a visitor, I felt like I was a member of the community."

Jennings credits Youngblood with opening the door that could have prevented him from attending Princeton. Then a senior in high school, Jennings could not afford a plane ticket to travel from Dallas to visit Princeton -- and Youngblood purchased a ticket for the young man, though they'd never met.

"It was the right thing to do," Youngblood said, who stressed the importance of giving back in his address. "Investing in people for people's sake, you never know where or how that will help."

The conference continued Friday with a panel discussion on the relation between student leadership on campus and leadership later in life. On Saturday, the conference was scheduled to include a talk by Wesley Harris, head of the Department Aeronautics and Astronautics at the Massachusetts Institute of Technology and the first African American to earn a doctorate in engineering at Princeton. A panel discussion on "Laboratory to Market: The Impact and Business of Science and Technology" was set to follow.

The conference, which attracted about 100 alumni, follows two other successful gatherings held this academic year focusing on alumni of color. In September, 500 participants attended the "Coming Back and Looking Forward" conference for black alumni. In November, "Kaleidoscope: An Alumni Conference on Race and Community at Princeton University" also drew 500 attendees to reflect on changes that have occurred at Princeton in recent years, to identify today's challenges and opportunities, and to look ahead.