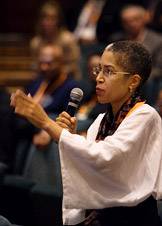 Returning to campus Oct. 22-24 for the largest gathering of black alumni in the University's history, graduates including Cora Monroe '80 participated in discussions with other alumni, faculty, administrators and students during a conference titled "Coming Back and Moving Forward." (Photo: Denise Applewhite)

At the largest gathering of black alumni in the University's history last weekend, emotions overflowed as people talked about change -- Princeton's transformation from their time as students and the transformation they can bring about through continued engagement.

"For many of us, our Princeton experience is complex," he added. "We love it. We have less love for it in other respects. It has helped us in our careers. We enjoy the people, and, in some instances, we've enjoyed the experiences. In others, we have enjoyed the experiences a little less. So the thought process was that we might need a new type of engagement to bring us back as we all move forward." 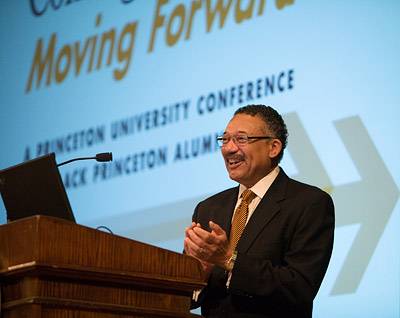 Dennis Brownlee (above), a trustee and 1974 graduate, is co-chairing a 14-member steering committee with Brent Henry, a trustee emeritus and 1969 graduate, called "Connect: A Black Alumni Leadership Initiative." Launched at the conference, the initiative is intended to involve African American alumni more deeply in the life of the University as leaders, volunteers and donors. (Photo: Denise Applewhite)

President Shirley M. Tilghman spoke on Friday afternoon about recent initiatives the University has undertaken to increase diversity, including: establishing the Center for African American Studies from the existing academic certificate program; renovating a building at 58 Prospect Ave. as the new home for the Carl A. Fields Center for Equality and Cultural Understanding; reaffirming its commitment to the strongest possible undergraduate financial aid program even in a period of significant fiscal stringency; and increasing the internationalism of the campus through such efforts as the Bridge Year Program, which began this year.

When asked how alumni can help, Tilghman pointed to the example of the Princeton Prize in Race Relations, an award given to high school students who have worked on race relations in their schools. This endeavor has grown from a small, alumni-funded award to a 23-city program sponsored by the University.

Tilghman called on the alumni community to share additional suggestions. "There are many more great ideas out there," she said. "This conference is to try and extract those ideas from all of you."

Robert Durkee, vice president and secretary and 1969 Princeton graduate, who welcomed participants on Friday, talked about the strides the University has made in increasing diversity since he was a student.

"In 1967 there were about 60 black students at Princeton, and that number far exceeded the total number of black alumni," he said. "The University had just appointed its second black administrator, with Carl Fields having been the first. There was little in the curriculum that spoke to the black experience in this country or the world."

He noted that this year's freshman class is the largest ever at 1,300 and that 37.4 percent of the class comes from minority backgrounds. "The three-year-old Center for African American Studies stands proudly on the front campus with a core faculty that has grown from two to 17, with an additional 18 faculty from other departments serving as associated and affiliated members. The center has increased courses by more than 40 percent, offering 36 this year, and has doubled the number of certificate students; with 41 students last year, it ranked in the top five out of Princeton’s 42 certificate programs. The center has, quite simply, become the gold standard in its field -- the leading resource for understanding race in America." 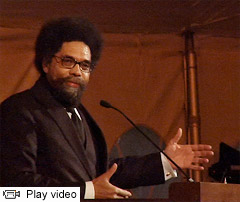 Alumni were able to attend academic discussions with some of the center's faculty members on Friday afternoon on subjects such as the racial achievement gap and how science and technology redefine culture.

Durkee also noted the efforts made by the University to improve diversity on the administrative side, including the appointments of Terri Harris Reed as vice provost of institutional equity and diversity, and Karen Jackson Weaver, a 1994 Princeton alumna, as associate dean of academic affairs and diversity in the Graduate School. He also described the increased support of artistic and cultural activities, from student groups to the new home for the Fields Center.

Alumni heard from students about current life on campus during a panel discussion on Friday afternoon titled "The Student Experience Today."

Friday evening featured Cornel West, the Class of 1943 University Professor in the Center for African American Studies, discussing his new memoir, "Brother West: Living and Loving Out Loud." His talk centered around issues of love, self-respect and giving to others as tools for remaining sane in a sometimes insane world. He explained that a "wind at his back," generated by love from his family, kept him from getting into too much trouble.

The conference was bookended by two talks on President Barack Obama.

The first, on Thursday, was a reading and discussion with Michael Eric Dyson, Georgetown professor and 1993 graduate alumnus. Dyson read from his forthcoming book, "Presidential Race: Barack Obama and Blackness in America," in which he analyzes how race played a large role in the Obama presidential campaign, including Obama's decision to distance himself from the controversial remarks by his former pastor, the Rev. Jeremiah Wright.

"Obama surely couldn't agree with Wright's analysis and remain a viable presidential candidate," Dyson said. "But he might have helped explain Wright better by placing him in an honorable tradition of prophets who denounce America's sins, rather than dismiss [Wright] as incendiary and divisive."

The second talk was a lecture by Eddie Glaude, the William S. Tod Professor of Religion and the chair of the Center for African American Studies. Glaude's Saturday night keynote address was called "America Looks Back: How Will We Move Forward?" In it, Glaude explored the notion of perceiving the past as a condition of the present, and more specifically, how America has reconciled the novelty of the current moment -- the election of its first black president -- with a past fraught with racism and oppression of blacks. 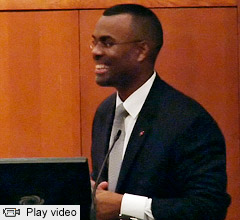 Glaude explained that there are different ways to look at the current moment -- either as a "final ritual of expiation" of the United States, or as a sign that Obama's exceptionalism is merely an example of the country's continuing racial malaise. Glaude called for the audience members to think about how they reflect. "How we look back," he said, "affects how we move forward. It's not enough to say, 'Come, you are now a part of America, you are now a part of Princeton.' It requires instead a fundamental examination -- a re-examination -- of what we mean by 'Princeton,' of what we mean by 'America.'"

Saturday also featured a lunch with Juanita James, a 1974 alumna and the first black female trustee of the University. James, chief marketing and communications officer at Pitney Bowes, reflected on her time at the University and how it prepared her for her future.

As part of only the second class of women to be admitted to the University, James found "a world of contradiction" at Princeton. While some alumni questioned the presence of both female and black students, the support was evident from the first class of women and presidents emeriti Robert F. Goheen and William G. Bowen. James said, "I learned to navigate myself away from those who wanted me to fail."

During an alumni engagement panel on Saturday, Catherine Toppin, a 2002 graduate who is the president of the Association of Black Princeton Alumni, explained why being engaged with the University has been important to her. "The time that I spend in my Princeton activities will pay dividends later," Toppin said. "Princeton is the center of my network." 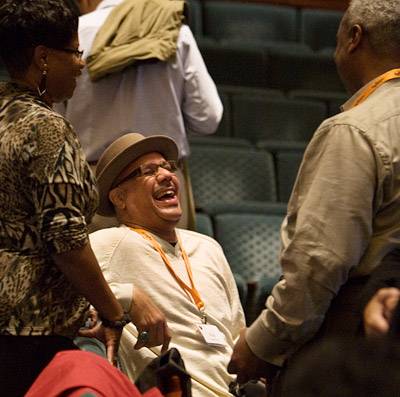 Black alumni who enjoyed getting together will be happy to learn that another conference already has been scheduled for 2012. (Photo: Denise Applewhite)

The alumni engagement session featured audience polling technology, and the attendees answered questions about Princeton black history and their personal involvement with the University by pressing buttons on keypads. The session also marked the kickoff of "Connect: A Black Alumni Leadership Initiative," which is intended to involve African American alumni more deeply in the life of the University as leaders, volunteers and donors.

The concept grew out of the first black alumni conference in 2006 and was launched by a group of current and past black University trustees. Led by co-chairs Dennis Brownlee, a trustee and 1974 graduate, and Brent Henry, a trustee emeritus and 1969 graduate, a 14-member steering committee will oversee the effort during these last three years of the Aspire fundraising campaign. Brownlee and Henry conducted a question-and-answer session with the audience about how best to give back to Princeton.

Goals include raising $4 million, expanding volunteer opportunities, learning more about prospective donors, and partnering with the Alumni Association and Association of Black Princeton Alumni to find fresh approaches to engaging volunteers and donors.

There are currently 3,273 living black alumni, 54 percent of whom are in the 1990 to 2008 classes. Henry explained that alumni connecting with one another is the best way to reach the goals, and also to ensure that more black alumni are remaining engaged with the University. 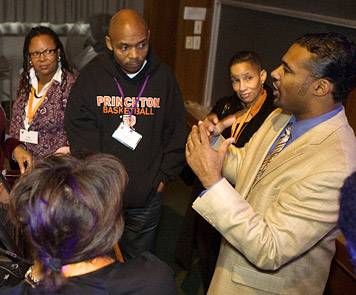 Alumni could choose from a dozen discussion panels to attend on Saturday, and were able to tour 58 Prospect Ave., the new home of the Fields Center and Community House. David Evans, a 1966 graduate alumnus, described entering Princeton in 1964 when there were only eight black graduate students, and said, "If Princeton was alma mater to all of us, then Carl Fields was alma pater."

Marguerite Vera, a 1979 graduate and the associate director for affiliated group affairs in the Alumni Council, was pleased with the large turnout at the conference, and credited the 2006 event for helping generate enthusiasm.

"Reunions doesn't do it for everyone," Vera said, referring to the class gatherings on campus each spring. "After the previous conference, many alumni felt Princeton embracing them in a different way, and they shared with their classmates how wonderful that was."

Mila Davis, a 1995 alumna, had not returned to Princeton since her fifth Reunion. "I came to the conference because I'm approaching my 15th Reunion, and I knew it would be a good opportunity to reconnect with classmates." Davis added, "I feel fortunate to have gone to Princeton when I did, but I think the energy level has increased over time."

The next conference already is being planned for 2012 by the Office of Alumni Association and the Association of Black Princeton Alumni affiliated group. Videos and photos from this year's conference will be available on the conferece website.

The participants gathered on the steps of Blair Arch for a group photo on Saturday afternoon. (Photo: Evelyn Tu)