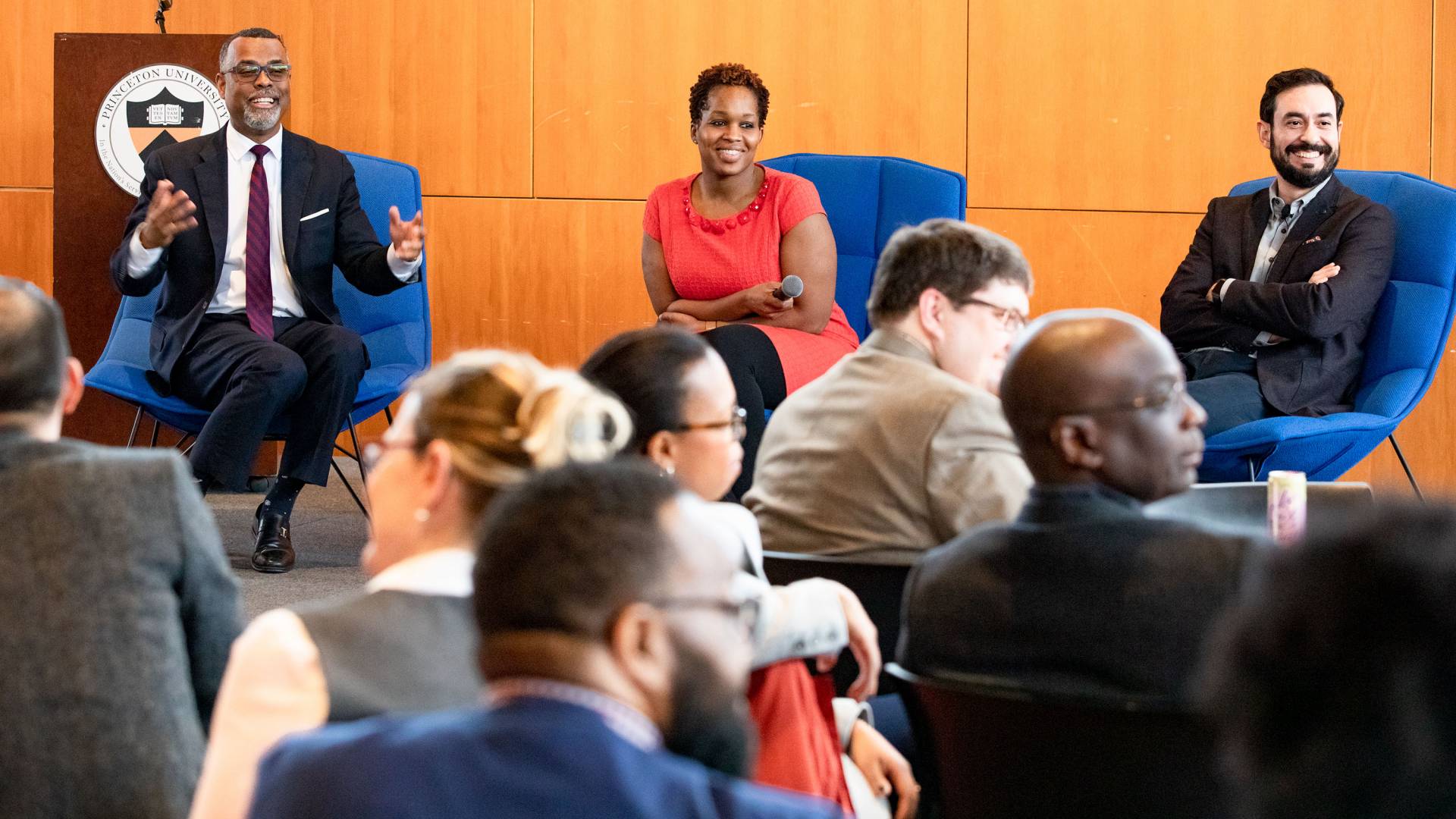 Eddie Glaude Jr., left, the James S. McDonnell Distinguished University Professor, professor of African American studies and chair of African American studies, moderated a discussion on Feb. 11 about “Race and Politics in 2020” featuring LaFleur Stephens-Dougan, center, and Ali Valenzuela, right, both assistant professors of politics. The panel was organized in honor of Black History Month and was sponsored by three of Princeton’s employee resource groups.

Three Princeton professors shared their views on how race is shaping the upcoming presidential election as part of a panel discussion titled “Race and Politics in 2020,” held Feb. 11 at the Carl A. Fields Center for Equality and Cultural Understanding. The event was organized in honor of Black History Month and was sponsored by three of Princeton’s employee resource groups — Princetonians of Color Network, Network of African American Males at Princeton, and Latino Princetonians.

“This conversation is beyond theory and academics,” said Tonya Gibson, co-president of the Princetonians of Color Network and a web project manager in the Office of Information Technology, who introduced the panel. “It impacts our everyday lives and the lives of generations to come.”

Stephens-Dougan, who researches racial attitudes, black politics and public opinion, is the author of the forthcoming book “Race to the Bottom: How Racial Appeals Work in American Politics.”

Valenzuela studies American politics, with a focus that includes Latino public opinion and turnout, immigration politics, and racial and ethnic identity in the United States. Valenzuela uses large data sets and experimental methods to investigate the causes and consequences of identity politics in the U.S.

Glaude, who studies African American political life, religious thought, gender and class, and who frequently engages in public debate on race and politics, opened the conversation by encapsulating his views of the current national political climate.

“We live in a moment that is fraught,” he said. “We live in a country that feels like it’s in a cold Civil War. Ugliness, the underbelly of American politics, is pretty much in clear view. The ghosts of the past haunt out in the open.”

He noted that at the beginning of the presidential campaign, the Democratic field was the most diverse in history, but that its black, Latino and Asian candidates have since dropped out. 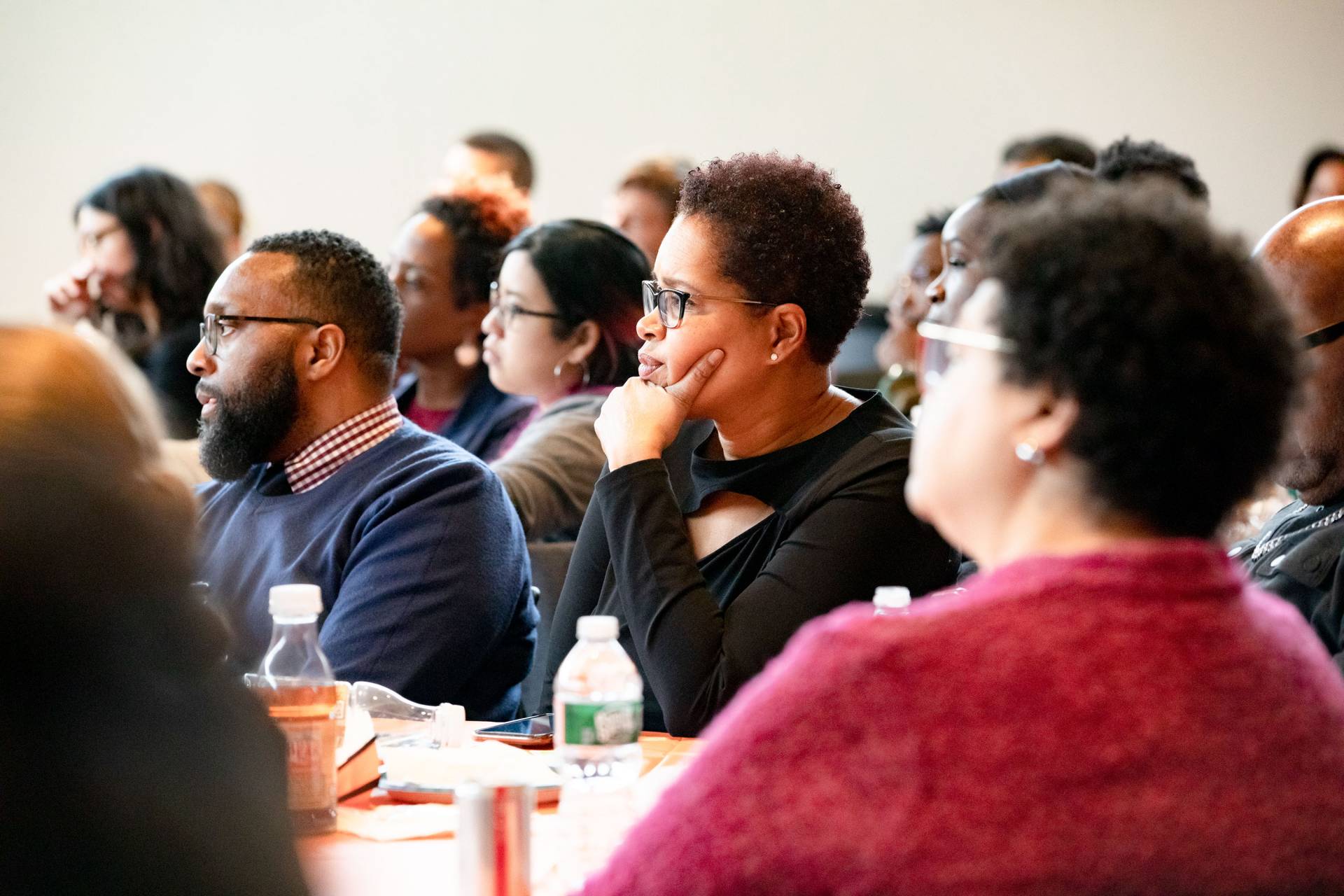 Members of Princetonians of Color Network, Network of African American Males at Princeton (NAAMA), and Latino Princetonians, as well as many staff and community members, pack the multipurpose room at the Carl A. Fields Center for Equality and Cultural Understanding to learn more about the role race is playing in the upcoming presidential election.

Dougan-Stephens said the diversity of the early slate was likely a reaction to nativism and racism, but that, “Some of us might have overestimated our fellow citizens’ commitment to a diverse field.”

Valenzuela said that having a remaining all-white field of candidates is “disappointing,” particularly because the identities of the candidates influence the types of conversations that come to the fore during the debates.

“The last two Democratic debates have not had a single word discussed about immigration,” he said. “And what’s going to be the number one issue that [President Donald] Trump and his allies try to use to divide the country? It’s going to be immigration. Yet, we know almost nothing — or we know very little — about how the current crop of potential candidates thinks about this issue.”

Another way in which a lack of diversity has played out thus far in the campaign is in the early primaries. Iowa and New Hampshire, the first two states to select candidates, are overwhelmingly white, the panelists said.

“They are playing an outsized role in the process,” Dougan-Stephens said, noting that a bandwagon effect can create momentum for candidates early on. “It has an impact in terms of fundraising ability, media attention. It’s really problematic.”

“Can we all just agree that caucuses have to go?” Valenzuela said.

As far as what role voters of color will play in the primaries and general election, Dougan-Stephens said black voters tend to be pragmatic and are likely to abandon candidates like former Vice President Joe Biden — who is counting on black support in later races — if they perform poorly.

“I think the road to the White House runs through black and Latino voters in 2020,” Valenzuela said. “Turnout for these groups of voters is going to be key. How strongly they support the Democratic candidate also is going to matter.”

Mobilizing voters, getting them excited and addressing their concerns will be essential, Valenzuela said. “Any Democratic nominee taking for granted black and Latino voters does so at his or her own peril,” he said. 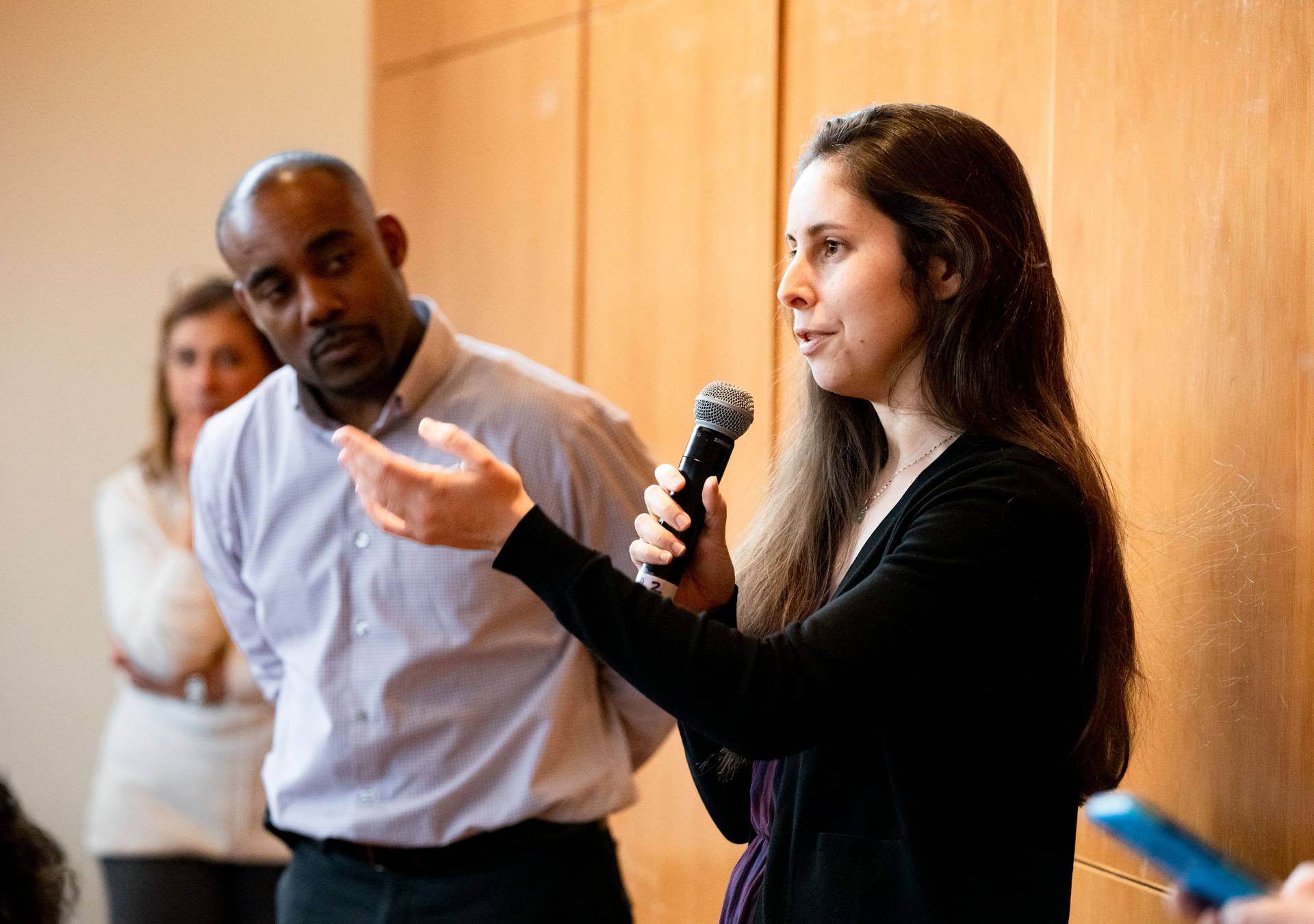 Katherine Clifton, coordinator of the Religion and Forced Migration Initiative in the Office of the Dean of Religious Life, asks the panelists about elected Republicans’ unwillingness to stand up to President Donald Trump. Next to her is Harris Otubu, a strategic IT consultant for the Office of Information Technology and president of NAAMA.