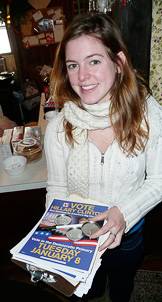 Middle below left: Sophomore Katie Walsh was one of the many students who climbed snow banks and braved freezing temperatures while canvassing for presidential candidates around New Hampshire before the state's Jan. 8 primary.

When asked what they learned through the Pace Center's 2008 New Hampshire Primary Action Program, students offered insights into the American electoral process that can best be gained by experiencing the intensity of a presidential campaign firsthand.

"I learned that you can quickly get the pulse of a community by knocking on neighborhood doors and talking politics with whoever answers," physics graduate student Arvind Murugan said. "It gave me a perspective that I couldn't even get by living in the neighborhood."

Murugan and Lee were among 19 students who traveled to New Hampshire with the Pace Center over winter break for the state's first-in-the-nation primary. The nonpartisan program was conceived as an educational mission to help students develop a deeper understanding of campaign politics, the presidential nomination process and the special role New Hampshire plays, said organizer Andrew Seligsohn, who joined the Pace Center in September as coordinator for civic engagement learning.

Through the program, undergraduate and graduate students-- including some from China, India and Canada -- spent a week in New Hampshire leading up to the Jan. 8 primary. The Pace Center arranged for students to volunteer for the candidate of their choice, including Democrats Hillary Clinton, Barack Obama and Bill Richardson, and Republican John McCain. Students met with campaign experts, talked with New Hampshire voters and attended rallies to hear the candidates give speeches. Before they left Princeton, they attended a prep session with Seligsohn to learn about the history of the New Hampshire primary.

The Pace Center program's holistic, educational approach made it distinctive from other opportunities for students to volunteer with political campaigns. The program was more than organizing students to hand out fliers and staff phone banks; it helped them understand the primary process and presidential election in a larger political and historical context.

"We wanted the students to move back and forth between what they were doing on the ground and what history and political science literature have to say about what they were doing and seeing," Seligsohn said. "We were constantly taking every opportunity to keep a conversation going across campaigns and across parties that allowed students to compare their experiences and analyze why one campaign did X, while another campaign was doing Y." 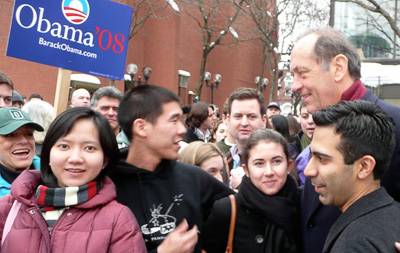 Seligsohn and Pace senior program coordinator Phil Martin co-led the student trip to New Hampshire, and were joined for part of the week by Melissa Harris-Lacewell, associate professor of politics and the Center for African American Studies. Seligsohn organized a similar trip in 2004 while a political science faculty member at Hartwick College in Oneonta, N.Y.

Freshman Jacob Aronson said the Pace Center program allowed him to observe the factors that influence voters and presidential campaigns that he had studied in his politics class, "Campaigns and Elections," with Assistant Professor of Politics and Public Affairs Markus Prior.

"When I heard about the Pace Center trip I realized it would be an excellent way to learn about the New Hampshire primary firsthand and to campaign for a candidate whom I supported," said Aronson, who worked for the Richardson campaign. "I knew an opportunity like this probably wouldn't come again."

He said working for a smaller campaign afforded him unique opportunities that peers working on larger campaigns did not have, such as going to the airport at 2 a.m. to greet Richardson when he flew into New Hampshire following the Iowa caucuses.

Lee, a politics major, said she has been intrigued by the inner-workings of campaigns since the beginning of high school.

"Until the trip to New Hampshire, I rarely had the opportunity to be in the mix with the politicians and to talk to voters about what issues are important to them," Lee said.

Climbing snow banks to hand out Clinton campaign materials made Lee realize the importance of old-fashioned shoe-leather politics, especially in New Hampshire where voters get to see candidates up close during frequent campaign stops at the neighborhood coffee shop or local school.

"The student volunteers were most useful to the campaigns when we were canvassing door-to-door in freezing temperatures to get out the vote," she said. "Instead of helping to set up for rallies like I had imagined, we spent most of our time in New Hampshire neighborhoods hanging pamphlets and talking with voters."

Lee said the best part of the trip, though, was seeing the hard work pay off when Clinton won the Democratic contest.

Murugan, who was born in India, said he participated in the Pace program because he feels like he has a stake in the future of the country even though he is not eligible to vote.

"Spending a week on a campaign in New Hampshire can surely have more impact than a single vote in New Jersey," said Murugan, who worked for the Obama team.

He said he was able to gain a broader perspective by traveling with students working for different campaigns instead of with a group that supported the same candidate.

During the week, students were expected to attend at least one event of another political party to compare how different campaigns operated. The group also attended two panel discussions at the New Hampshire Institute of Politics at St. Anselm College, met political pollster Dick Bennett and watched one of the debates at a local restaurant, where Harris-Lacewell led a rousing discussion that prompted nearby diners to join the conversation.

"I loved watching the debate through the students' eyes," Harris-Lacewell said. "I went to a dozen rally and town hall meetings on my own and had many great experiences, but it was the chance to discuss these experiences with the students that helped me grow the most."

Harris-Lacewell also arranged for the students to participate in media interviews while in New Hampshire, with some students commenting on radio programs such as NPR's "News and Notes" and the independent "Democracy Now."

"There is so much discussion in the media about 'young people' but rarely any chance for young people to speak for themselves," she said. "I enjoy having a chance to show what a diverse and courageous student body we have, and I think the interviews were an opportunity for the country as a whole to see Princeton students in the nation's service."

Some students said the trip to New Hampshire made them think differently about the election media coverage, as what they observed on the ground was not always what was being reported in the media.

Now that the students are back on campus, the group will continue to meet for discussions and to follow election results as primary contests continue across the country, including in New Jersey on Feb. 5. Seligsohn said he hopes to use the lessons derived in New Hampshire to create a Pace Center bipartisan education program that would get students to work on the general election campaign during next year's fall break.

"Again, it would be a program situated within the context of real learning opportunities about the issues, how campaigns work and how all this fits into the context of a democratic system," Seligsohn said.

Students welcomed an opportunity to stay involved with the Pace Center program and the campaigns.

"It was an amazing experience," Aronson said. "It's a shame presidential primaries only come every four years."