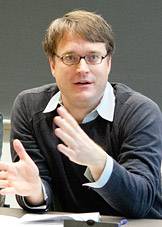 Markus Prior, an associate professor of politics and public affairs, helps students understand the nature and impact of modern political campaigns in the class "Electing the President: Voter Psychology and Candidate Strategy." "I want to give students an understanding of what campaign organizations do, what type of strategy they appear to be applying and why, and what that looks like from the voters' perspective," Prior said.

Instructor: Markus Prior is an associate professor of politics and public affairs and co-director of the Center for the Study of Democratic Politics at Princeton. Prior's current research focuses on understanding the origins of political interest and the determinants of political knowledge. Prior, who came to Princeton in 2003, earned his master's degree from Ohio State University and his Ph.D. from Stanford University. Prior's 2007 book, "Post-Broadcast Democracy: How Media Choice Increases Inequality in Political Involvement and Polarizes Elections," examined how politics in the United States has been changed by the evolution of media over the past half-century. The book won the 2009 Goldsmith Book Prize, awarded by Harvard University's Joan Shorenstein Center.

Description: The course examines how campaigns affect voters. The primary focus is on the nature of modern campaigns and their impact on people's reasoning and voting behavior. Students get an overview of different explanations of how people make voting decisions and how people's voting behavior is best understood. "I want to give students an understanding of what campaign organizations do, what type of strategy they appear to be applying and why, and what that looks like from the voters' perspective," Prior said. While voters occasionally have face-to-face interaction with candidates, most of their exposure to campaigns comes from the media and the campaigns themselves. "So we have to cover campaigns, the media and citizens — each from their own point of view — and then we try to bring those perspectives together and see how that makes an election campaign," Prior said.

One of the underlying questions addressed by the class: Do campaigns actually matter? "There are still a few people who say campaigns really don't matter at all. There are others who say campaigns are hugely influential," Prior said. "Some people might say they manipulate voters. Others would say they don't manipulate voters but educate them and allow people to realize their own preferences and translate their own interests into a vote choice that is good for them." The difficulty in providing a clear-cut answer to the basic question is one of the challenges of the class, Prior said. "It takes a big tool kit, and I try to teach students a lot about how we use the instruments of social science," he said. "When we use these instruments carefully, we can answer important questions but even then we have to always caution that there is uncertainty. That's just how science works."

Prior said the class evolves each time he teaches it as political science research and literature advance. New this semester, for example, is a lecture on "micro-targeting" and the idea that campaigns have become very adept at this technique of targeting individual voters or narrow groups of voters with messages. "For the past 10 years, that has been talked about and speculated about a lot among media folks and campaign folks, but it was impossible to verify," Prior said. "Now there are political scientists who study this systematically. And I'm feeling comfortable talking about it because I'm learning from my colleagues' work in this area."

During the precept he leads each week, Prior encourages students to discuss the relationship between the class readings and topics discussed in his lectures. Prior said he evaluates and updates the class each time he teaches it as political science research and literature advance.

Perspective on 2012: Prior said interest in the class from students is generally higher during presidential election years, but he cautions that the class isn't specifically about the current campaign. "It's a class about presidential elections in the U.S. and what factors are important," Prior said. "But whether or how they mattered in 2012 we won't quite know. It takes time to figure these things out."

Still, lessons of past elections can be useful as the current race comes down to the wire. "There's a structure to campaigns that is the same every time," Prior said. "For example, as we get close to Election Day the candidates have to make a choice about where to focus their advertising. Those kinds of choices come about the same way every four years, and the baseline expectations about which states might be in play vary surprisingly little. We've been talking about the same swing states now for three or four or five elections — states like Ohio and Florida. In that sense, I don't think it's so hard to make the case that we can use the past to understand the present or maybe even the future."

Students say: Kevin Whitaker, a senior who is majoring in economics, said he has found the weekly precept that accompanies the twice-weekly lectures especially valuable. Each week a student and Prior lead the discussion among 15 students, covering issues from the lectures and course readings. "Professor Prior really challenges us in precept to get beyond the top-level findings from the readings and actually understand how the studies work and what the purpose of everything is," Whitaker said.

Duncan Hosie, a freshman who plans to major in either politics or the Woodrow Wilson School of Public and International Affairs, said the class has already helped him better interpret political news. "For example, we read research that suggests that many of the volatile fluctuations in collective preference polling between 'likely' voters and 'unlikely' voters stems from temporary changes in voter enthusiasm and not necessarily lasting changes in public opinion," Hosie said. "When I looked at crosstabs [cross tabulations] from polls after events that amplified Democratic enthusiasm, like the Democratic convention, and Republican enthusiasm, like Romney's debate performance, I saw this phenomenon occurring in real life."