A new alumni-led enterprise will involve black graduates more deeply in the life of Princeton University as leaders, volunteers and donors.

Efforts are now under way with "Connect: A Black Alumni Leadership Initiative" that officially kicked off at an October conference, "Coming Back and Moving Forward," when some 650 black alumni returned to campus to share experiences and plan for progress at the University. Goals for the initiative include raising $4 million, expanding volunteer opportunities, learning more about prospective donors, and partnering with the Alumni Association and Association of Black Princeton Alumni to find fresh approaches to engaging volunteers and donors.

The Connect initiative is part of "Aspire: A Plan for Princeton," the University's five-year comprehensive fundraising campaign, now in its third year.

"To sustain and strengthen Princeton's excellence in teaching, learning, leadership and service, we depend on the involvement of all our alumni," said President Shirley M. Tilghman. "We deeply appreciate the diversity of our alumni body and the many contributions black alumni have made to Princeton. We look forward to working with them to create even more opportunities to participate in the life of the University and help shape the Princeton of the future." 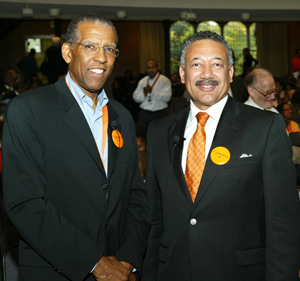 University trustee emeritus Brent Henry (left), a 1969 alumnus, and trustee Dennis Brownlee, a 1974 alumnus, are co-chairs of the 14-member steering committee that will drive the Connect initiative. (Photo: Andrea Kane)

University trustee Dennis Brownlee, a 1974 alumnus, and trustee emeritus Brent Henry, a 1969 alumnus, are co-chairs of the 14-member steering committee that will drive the Connect initiative, along with a 25-member advisory committee.

"The University has changed, but there's a lot of change yet to be done," said Brownlee. "We have to take ownership of our Princeton experience and give back, for the sake of the students who are here now and the students yet to come."

Nearly 3,300 alumni (87 percent undergraduate and 13 percent graduate alumni) have identified themselves as black or African American, either through the University's Office of the Registrar or a recent Alumni Directory survey. More than half of them (54 percent) graduated in the classes of 1990 to 2008.

The impetus to create the Connect initiative originally came from a 2006 conference called "Coming Back and Looking Forward" that drew some 500 black alumni, many of whom had not returned to campus since graduation. That conference coincided with the establishment of the Center for African American Studies, which had been expanded from an existing certificate program and relocated to the historic Stanhope Hall on the front campus.

Since then, Princeton has further expanded its commitment to diversity. The core faculty of the center has grown from nine to 17, with an additional 18 faculty members from other departments as associated and affiliated members. In 2009-10 it is offering 36 courses. In 2008-09, with 41 students, the center ranked in the top five out of Princeton's 42 certificate programs.

Other campus initiatives undertaken in the past three years include renovating 58 Prospect, a former eating club, as the new home of the Fields Center for Equality and Cultural Understanding and Community House; reaffirming Princeton's commitment to the strongest possible undergraduate financial aid program; and increasing the internationalism of the campus by expanding opportunities for study and service abroad. In the class of 2013, more than 37 percent of the students come from minority backgrounds.