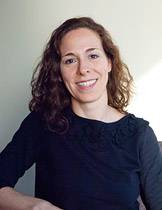 Jacqueline Deitch-Stackhouse, who has more than 13 years of experience in counseling, advocacy and violence prevention, has been named director of Princeton University's Sexual Harassment/Assault Advising, Resources and Education (SHARE) office. Her appointment is effective Jan. 3.

Reporting to University Health Services Executive Director John Kolligian, Deitch-Stackhouse will oversee the office's victim/survivor-centered approach to sexual harassment, assault and relationship violence throughout the University community, with a primary focus on the well-being of students.

She will provide emergency response and immediate advocacy to students affected by sexual harassment and violence, and facilitate consultations to mental health, medical, legal and other resources as needed.

She will develop relationships with University departments, community members and with experts at the state and national levels; create and implement prevention and education programs; and supervise student peer advisers. Deitch-Stackhouse will also serve on a new standing Committee on Sexual Misconduct Prevention, Policies and Programs, which is charged with strategic planning, goal setting and monitoring of progress to the prevention of all forms of campus sexual misconduct.

"Jackie has firmly established herself as a strong, effective proponent of a victim-centered approach to campus response, education and policy development," Kolligian said. "She has a sophisticated knowledge of, and nuanced appreciation for, campus dynamics and tensions in this important area."

"Princeton clearly possesses the high level of commitment and the sense of community required to actively promote a safer campus culture," Deitch-Stackhouse said. "For these reasons, I wanted to take the opportunity as SHARE director both to support current campuswide efforts and to launch new initiatives in order to reduce the number of people who become victims in the first place."

Since 2004, Deitch-Stackhouse has served as coordinator of the Office of Anti-Violence Initiatives for the College of New Jersey, where she designed customized training programs for college faculty, students, staff and law enforcement; provided counseling and crisis intervention during emergencies; built a number of campus and communitywide partnerships; created a student peer education program to promote healthier relationship skills; and expanded the college's network of first responders. She also served as chair of the college's Sexual Assault Task Force, as an elected staff representative of its board of trustees and as an associate member of the staff senate.

Previously, she worked for six years in counseling and social work positions at the Jewish Family and Children's Service in Philadelphia.

Deitch-Stackhouse earned two master's degrees, in social service and law and social policy, from Bryn Mawr College. She earned a bachelor's in psychology from the University of Richmond and also holds a license to practice clinical social work.