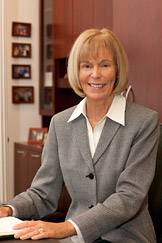 Betty Leydon, who has served as the vice president for information technology and chief information officer at Princeton University for more than 10 years, has announced plans to retire at the end of the academic year on June 30.

Leydon, who joined the Princeton administration in 2001, has devoted more than 30 years to working in the IT field, with 25 years in higher education. She intends to move to North Carolina, where her husband, John, is the vice president and CIO for the University System of North Carolina.

"For more than a decade, Betty Leydon has steadily guided Princeton through the ever-changing world of information technology," said President Shirley M. Tilghman. "She has left a lasting imprint on the Office of Information Technology (OIT) and on Princeton as a whole, not least, as she once put it, by 'making sure that the technology does not become an end in itself.' This commitment to the greater good has helped our students, faculty and staff to embrace the opportunities presented by the digital revolution, while taking its challenges in stride — no small achievement!"

Provost Christopher Eisgruber, to whom Leydon reports, is in the process of selecting a search committee to seek a successor.

At Princeton, Leydon has been responsible for providing vision and leadership to develop and implement the information systems and services that support the University's information technology needs.

Chief among her accomplishments has been overseeing the creation, in 2001, and evolution of OIT as an organization committed to service. In 2009, much of OIT's staff was relocated to a new home at 701 Carnegie Center, consolidating many of its operations in one main location.

Leydon also has been committed to collaborating with faculty members to make significant advances in Princeton's computing research capabilities, culminating in November in the opening of the High-Performance Computing Research Center on the Forrestal campus.

"Betty Leydon has served Princeton admirably during her 10 years as its chief information officer," Eisgruber said. "Her leadership was essential to the successful completion of OIT's new office space and to Princeton's new state-of the-art High-Performance Computing Research Center. She has made OIT one of Princeton's most responsive and service-oriented organizations, and she has partnered effectively with colleagues from both the academic and administrative sides of the University."

He added, "Betty is a nationally recognized leader in her field. Her shoes will be difficult to fill, but she has ensured that her successor will inherit a terrific foundation on which to build Princeton's IT future."

Executive Vice President Mark Burstein said, "Betty has been a wonderful colleague to me and to members of the administration. Her and OIT's focus on improving service, using technology as a tool for efficiency, and enhancing our policies and controls has provided critical support for many areas across the University. She leaves Princeton with a very strong technology organization in place."

For Leydon, being able to collaborate with members of the community from across the campus has been an unforgettable experience. "Princeton really is a special place and I will miss so many people here," she said, noting that the University's comparatively small size "contributes to the accessibility of everyone," with the outcome that it "makes it easier to understand what our common goals are and to share information that helps us achieve those goals."

Leydon came to Princeton from Duke University, where she was the vice provost for information technology and CIO for seven years. Previously, she spent eight years at the University of New Hampshire, ultimately becoming executive director for computing and information services.

A 1967 graduate of Bucknell University, Leydon started her career as a computer programmer and systems engineer before becoming a marketing representative at the IBM Corp. in 1973. From 1975 to 1981 she lived in France, teaching English and earning two postgraduate degrees from the l'Université de Nantes, before returning to the United States to earn a master's degree in English language and linguistics from the University of New Hampshire.

In shaping OIT, Leydon said she worked from the foundation of a "strong technical infrastructure" to develop an organization devoted to "excellence in service." To facilitate this work, she introduced in 2001 a governance model of advisory councils to ensure that IT decisions reflected the needs of the community. One of those councils, the Senior Advisory Group on IT (SAGIT), was formed to advise the provost on funding for strategic IT initiatives, resulting in dedicated annual funding.

"This governance model has allowed OIT to work effectively with business offices across campus to understand their business needs and to develop administrative applications that meet those needs," Leydon said.

In further mapping the IT plan for Princeton, in 2006 Leydon led OIT in a University-wide strategic planning process in which more than 1,000 faculty, staff and students participated, completing surveys and joining focus groups as part of this effort. A strategic plan was finalized the following year, and today continues to provide direction for future IT goals at Princeton.

In describing OIT's commitment to service, Leydon identifies two important examples. One is the OIT Solutions Center, which was established in 2003 and is housed in the Frist Campus Center to offer a central location for IT support for customers. The other is the OIT Help Desk, which as of 2007 has provided assistance to IT users 24 hours a day, seven days a week.

Over the past decade, service also has meant making IT more efficient and accessible to the University community through improvements in technology. In 2004, OIT expanded wireless coverage throughout the dormitories and residential colleges, and three years later completed a wireless network infrastructure across the entire campus. Progressive upgrades also were made to the wired network and the University's connection to the Internet and Internet2. As technologies evolved, OIT launched new services to meet the changing needs of users, including Web-based tools and support for laptops and portable devices, as well as a new smartphone mobile application, iPrinceton, in 2010.

"I am most proud of the dedication and support of the OIT staff I have worked with during my tenure at Princeton," Leydon said. "They truly understand, and believe in, customer service and work hard to provide the best possible IT service to faculty, staff and students."

Overseeing significant developments in computational research at Princeton also has been a focus for Leydon. In November, after extensive planning, the University's High-Performance Computing Research Center opened on the Forrestal campus. The center gives Princeton researchers new capacity to tackle complex scientific challenges. It also consolidates in one location high-performance computers previously at other sites, allowing for researchers to collaborate more easily, as well as saving costs by having a centralized approach so that individual departments do not have to install and provide power to their own high-performance computers.

The new facility builds on previous important developments in high-performance computing at Princeton, including the acquisition in 2005 of a Blue Gene/L system from IBM, which, at its inception, was among the world's top 100 most powerful supercomputers. In 2008, OIT partnered with faculty researchers to launch TIGRESS — the Terascale Infrastructure for Groundbreaking Research in Engineering and Science.

Looking back over her time at Princeton, Leydon said, "Each of these accomplishments could not have happened without the support of each person in OIT."

After she retires, Leydon intends to build a new home in Durham, N.C., close to Duke basketball games, to which she holds season tickets, and with "lots of room for visitors from Princeton." She also plans to take up the violin again, as well as Irish fiddle music. An avid traveler, she and her husband look forward to future trips with the Princeton Journeys alumni education program, having already enjoyed "wonderful experiences" in Egypt, China and Russia.

One of world's fastest supercomputers to aid Princeton researchers