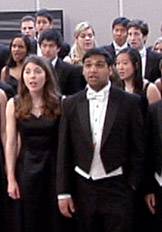 In a video about the Glee Club, 89 students gathered in McAlpin Rehearsal Hall to perform "Sednalo e Djore Dos," a Bulgarian folk song that tells the story of an outgoing girl trying to get the attention of a shy boy.

The Princeton University Glee Club, which performs a repertoire of sacred and secular choral music from the Renaissance to the present day, allows students with a wide range of nationalities, majors and skills to participate in a shared passion — singing.

"At a place like Princeton, where the academic standards are so high and the students work so hard, I think Glee Club is especially important because it's a special opportunity to just feel, to live and breathe music," said Gabriel Crouch, director of Princeton's Glee Club and Chamber Choir since 2010.

Princeton's Glee Club performs in a broad array of musical styles, such as 17th-century German romantic songs, madrigals, and American and international folk songs. In a video about the Glee Club, 89 students gathered one warm April afternoon to rehearse "Sednalo e Djore Dos," a Bulgarian folk song that tells the story of an outgoing girl trying to get the attention of a shy boy.

The club's members come from a variety of backgrounds and academic interests. The group provides them with opportunities to work with professional soloists and orchestras and to travel internationally every other year.

"I don't think there's really any better place to sing in a choir than here at Princeton," said member Nathaniel Fleming, who is the Class of 2012 valedictorian. "A lot of our concerts together have been unforgettable experiences."

The club has inspired devotion not only by current undergraduate students but also among its many alumni. Emily Sung, of the Class of 2011, returns for every rehearsal and has become assistant conductor. "I always learn something new at every rehearsal — not just one thing, but many, many new things," she said. "The amount of experience Gabriel brings to teaching and music really shows."

Crouch, who is a senior lecturer in Princeton's Department of Music and associate director of the Program in Musical Performance, began his musical career as an 8-year-old in the choir of Westminster Abbey, where he performed a solo at the wedding of Great Britain's Prince Andrew and Sarah Ferguson. While teaching students at Princeton is his current focus, he continues to perform and conduct around the world.