Taking their cue from the humble leaf, researchers have used microscopic folds on the surface of photovoltaic material to significantly increase the power output of flexible, low-cost solar cells.

The team, led by scientists from Princeton University, reported in the journal Nature Photonics that the folds resulted in a 47 percent increase in electricity generation. Yueh-Lin (Lynn) Loo, the principal investigator, said the finely calibrated folds on the surface of the panels channel light waves and increase the photovoltaic material's exposure to light.

"On a flat surface, the light either is absorbed or it bounces back," said Loo, a professor of chemical and biological engineering at Princeton. "By adding these curves, we create a kind of wave guide. And that leads to a greater chance of the light's being absorbed." 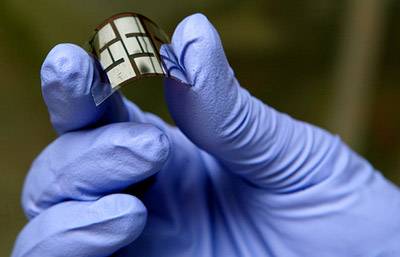 Yueh-Lin (Lynn) Loo, a Princeton professor of chemical and biological engineering, displays a sample of her team's new photovoltaic cell, which is more efficient and tougher than traditional cells. (Photo by Frank Wojciechowski)

The research team's work involves photovoltaic systems made of relatively cheap plastic. Current solar panels are typically made of silicon, which is both more brittle and more expensive than plastics. So far, plastic panels have not been practical for widespread use because their energy production has been too low. But researchers have been working to increase that efficiency with the goal of creating a cheap, tough and flexible source of solar power.

If researchers can increase the plastic panels' efficiency, the material could produce power from an array of surfaces from inserts in window panels to overlays on exterior walls or backpacks.

"It is flexible, bendable, lightweight and low-cost," Loo said.

In most cases, researchers have focused on increasing the efficiency of the plastic photovoltaic material itself. Recent developments have been promising: In a separate study, a team from the University of California-Los Angeles recently announced a system with a 10.6 percent efficiency. That approaches the 10 to 15 percent level seen as the target for commercial development. (Efficiency represents the percentage of photons striking the solar cell that creates an electric charge.)

Loo said the folding method pioneered at Princeton promises to increase efficiency levels even further. Because the technique works with most types of plastic photovoltaic materials, it should provide a boost to efficiency across the board.

"This is a very simple process that you can use with any material," she said. "We have tested it with other polymers and it works as well." 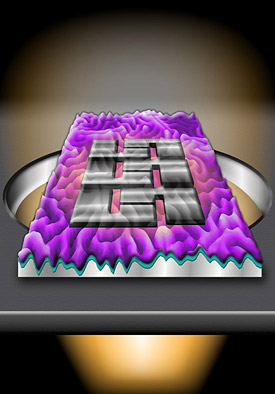 As shown in this rendering, folds on the cell's surface increase efficiency by guiding light waves. (Image courtesy of Illisa Ocko)

Jong Bok Kim, a postdoctoral researcher in chemical and biological engineering at Princeton and the paper's lead author, explained in the Nature Photonics paper that the folds on the surface of the panels channel light waves through the material in much the same way that canals guide water through farmland. By curving the light through the material, the researchers essentially trap the light inside the photovoltaic material for a longer time, which leads to greater absorption of light and generation of energy.

"I expected that it would increase the photocurrent because the folded surface is quite similar to the morphology of leaves, a natural system with high light-harvesting efficiency," said Kim, a postdoctoral researcher in chemical and biological engineering. "However, when I actually constructed solar cells on top of the folded surface, its effect was better than my expectations."

Although the technique results in an overall increase in efficiency, the results were particularly significant at the red side of the light spectrum, which has the longest wavelengths of visible light. The efficiency of conventional solar panels drops off radically as light's wavelength increases, and almost no light is absorbed as the spectrum approaches the infrared. But the folding technique increased absorption at this end of the spectrum by roughly 600 percent, the researchers found.

"If you look at the solar spectrum, there is a lot of sunlight out there that we are wasting," Loo said. "This is a way to increase efficiency."

The research team created the folded surface in the laboratory of Howard Stone, the Donald R. Dixon '69 and Elizabeth W. Dixon Professor of Mechanical and Aerospace Engineering. To create the folds, the researchers used ultraviolet light to harden a layer of liquid photographic adhesive, a process called curing. By controlling how fast different sections of the adhesive cured, the team was able to introduce stresses in the material and generate ripples in the surface. The shallower ripples were classified as wrinkles and the deeper ones are called folds. The team found that a surface containing a combination of wrinkles and folds produced the best results.

Although the math underlying the process is complex, the actual production is straightforward. Loo said it would be quite practical for industrial purposes.

Another benefit of the process is that it increases the durability of the solar panels by relieving mechanical stresses from bending. The researchers found the panels with folded surfaces were able to retain their effectiveness after bending. A standard plastic panel's energy production would be diminished by 70 percent after undergoing bending.

Loo said the researchers drew their inspiration from leaves. Seemingly a simple object, the leaf is a miracle of natural engineering. Its green surface is perfectly constructed to bend and control light to ensure that a maximum amount of solar energy is absorbed to create energy and nutrients for the tree. Recent work led by Pilnam Kim, a postdoctoral researcher in Stone's lab, and by Manouk Abkarian, a visiting scientist from France, provided insight into how these folded structures develop and could be controlled.

"If you look at leaves very closely, they are not smooth, they have these sorts of structures," said Loo, who is deputy director of Princeton's Andlinger Center for Energy and the Environment. "We'd like to mimic this geometric effect in synthetic, man-made light-harvesting systems."

The research team also included Jason Fleischer, an associate professor of electrical engineering at Princeton; Nicolas Pégard, a graduate student in electrical engineering at Princeton; and Soog Ju Oh and Cherie Kagan of the University of Pennsylvania. Support for the research was provided by the Office of Naval Research, the National Science Foundation, including those through the Princeton Center for Complex Materials, the Air Force Office of Scientific Research, and the Curtin-Stafford Fund at Princeton.

The paper was published online April 22 in Nature Photonics.