Princeton President Shirley M. Tilghman led a panel discussion during the conference "Diversity on Campus: Practices, Policies and Culture," in the Friend Center auditorium on Dec. 13. The conference was sponsored by the Trustee Ad Hoc Committee on Diversity and featured academic administrators, scholars and policymakers from across the country.

From improving financial aid to cultivating leaders who value different people and viewpoints, the Princeton University conference "Diversity on Campus: Practices, Policies and Culture" examined a spectrum of ways to promote diversity within higher education.

"If we knew there was one solution, we would have done it and we wouldn't be here today," said panelist Cecilia Rouse, dean of Princeton's Woodrow Wilson School of Public and International Affairs. "All of these different institutions, they all have different challenges."

The Dec. 13 event, which was free and open to the public, brought academic administrators, scholars and policymakers from across the country to the Friend Center auditorium. Princeton President Shirley M. Tilghman and Provost Christopher Eisgruber each moderated panels. 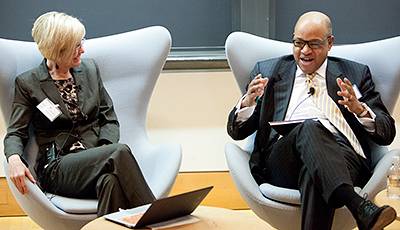 The Trustee Ad Hoc Committee on Diversity sponsored the conference as it works to identify ways to enhance the diversity of Princeton's faculty, graduate student body and senior administration. Tilghman appointed the group this past January to build upon Princeton's achievements in creating a vibrant campus community, such as the increased socioeconomic, racial and ethnic diversity of undergraduate students.

"This conference has really helped us move the ball forward," said committee co-chair Brent Henry, a Princeton trustee and member of the Class of 1969. "It has given us a true launching pad to go forward with some solutions that we really had not thought about before, and more importantly, ways to implement those solutions."

In leading a talk on promoting success in diverse environments, Tilghman noted how concepts of discrimination have changed over the past 40 years.

"When I was a student, I think we all understood discrimination as something that was visible, palpable and easily identifiable, and that created strategies for how to respond to discrimination," Tilghman said. "It strikes me that one of the most important things that scholars like yourselves are learning … is that it is much more unconscious than we ever believed.

"What are the implications for universities like this one that is so self-consciously trying to be an institution where diversity can really flourish?" she added. 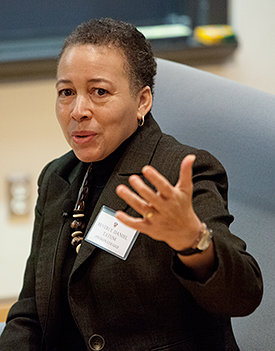 "When you raise people's consciousness about something, they may still fall into that trap but it's less likely to happen," she said.

"I sometimes use the example of a photograph. … If we think about the university as a photograph, when you enter this space, you are looking for yourself in it," Tatum said. "But if every time you [gather for a group photo], the people on the edges get left out of the picture, they are not going to want to participate in that group photo. You only want to participate in the picture if you are certain you are going to be included in a positive way."

As the conversation turned to employing faculty and staff of varied backgrounds, panelists agreed that much rested with leaders, whether college presidents, department chairs or lab managers.

"The leadership piece is really key for articulating the value of diversity and the idea that we are all responsible for creating a workplace where everyone can succeed," said Stanford University sociology professor Shelley Correll.

David Thomas, dean and chair of Georgetown University's McDonough School of Business, said managers should recruit diverse applicant pools and then evaluate all applicants — regardless of race and gender — with the same high standards. He added that mentoring is crucial for retaining faculty and staff, as well as for inspiring students of color and women to study in academic fields where they may be underrepresented.

"When you are the first person in your family to go to graduate school, it can be hard if you don't feel like there really is a support system there," she said. 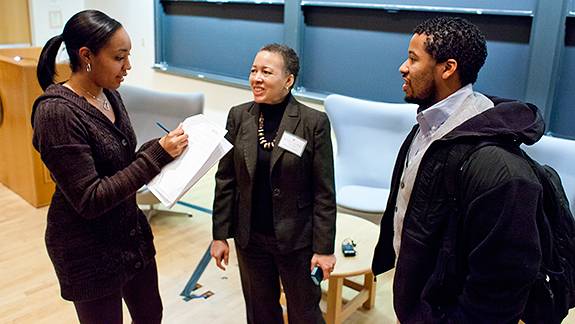 During an afternoon panel on diversity and higher education policy, Eisgruber asked how universities could better support diversity.

Rouse, who also is the Lawrence and Shirley Katzman and Lewis and Anna Ernst Professor in the Economics of Education, cited Princeton's 2001 adoption of a no-loan financial aid program as a major initiative.

"I think that says from the top, we really mean it. We don't want family means to be a barrier to coming to Princeton. That is an institutional message," Rouse said. "But it's got to filter down to the little tiny decisions that get made every day in the classroom and at the department level." 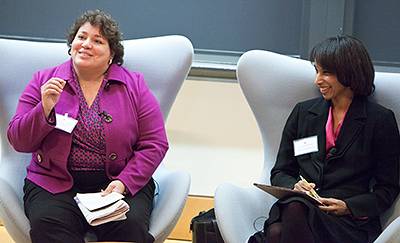 Deborah Santiago, co-founder and vice president for policy and research at Excelencia in Education, said it's also about financial literacy — helping students and families navigate the complexities of applying for federal and private financial aid.

"It's not only access, but retention. We think we got [students] in [to college], but did they get through and graduate?" Santiago added.

Thoughts on education policy quickly turned to the U.S. Supreme Court case Fisher v. University of Texas. The group debated how the court might rule on the case challenging the University of Texas-Austin's affirmative action admissions policy.

No matter how it's resolved, Emory University Provost Earl Lewis said universities and colleges should continue to find ways to value and foster diverse campus communities.

"If the court strikes down University of Texas, I hope the [higher education] community does not overact. This is a long fight and we should take the long view. Where do we want to be in 25 or 30 years?" said Lewis, who also is president-elect of the Andrew W. Mellon Foundation.

Questions from the audience prompted panelists to agree that there need to be better connections between higher education and K-12 in order to prompt more diversity in all pipelines. 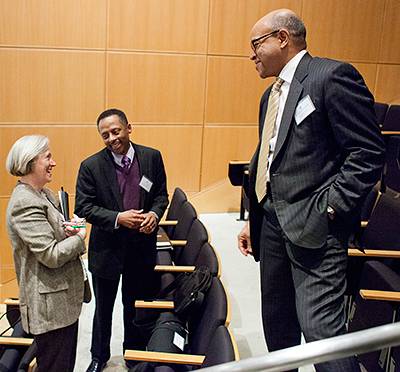 Earlier in the day, the conference featured a presentation by University of Michigan professor Scott Page on "The Benefits and Costs of Diversity in Colleges and Universities." It was followed by a panel on "Creating a Diverse Campus" that included Danielle Allen, a Princeton trustee and member of the Class of 1993 and UPS Foundation Professor at the Institute for Advanced Study; Dwight McBride, associate provost and dean of the Graduate School at Northwestern University; Marta Tienda, the Maurice P. During '22 Professor in Demographic Studies at Princeton; and Virginia Zakian, the Harry C. Wiess Professor in the Life Sciences at Princeton.

Deborah Prentice, co-chair of the trustee committee on diversity and conference organizer, said the event's exchange of ideas was fascinating.

"It raised new questions, as well as gave us some good thoughts for programs we may want to implement here," said Prentice, the Alexander Stewart 1886 Professor of Psychology and Public Affairs.

The conference was among focus groups, surveys and other outreach efforts the trustee committee on diversity will complete before it expects to issue a final report in spring 2013.

(From left to right) Princeton Provost Christopher Eisgruber moderates a discussion among Santiago, Rouse and Lewis about diversity and higher education policy.